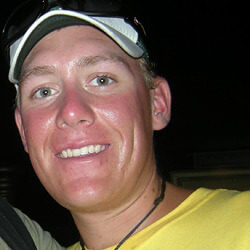 Ryan Lovell
Ryan Lovell, 20 Baylor University Glassmen Trumpet, 2007-2009 How did you choose your corps? I got interested in the drum corps activity by going to the DCI regional event in San Antonio for the first time in 2004. The show that really hooked me on the Glassmen was their 2006 show; the music entranced me and I loved the drill forms. I then looked at more Glassmen shows on DCI.org and really liked what they had done in the past. After that I looked up their information on the Web site and talked with people who had marched in drum corps. They recommended the Glassmen to me and after that I decided to go out to audition. In your experience, what's the best way to prepare for an audition? Practice the audition materials that are given to you. That is really the best way. Also start communicating with the staff caption head of the section you are auditioning for, or even the executive director of the corps. Talk to those people, tell them where you are from, ask for more information about the corps, and ask any questions you may have. They are there to help you. What can a prospective corps member expect when he/she shows up for an audition weekend? You can expect to experience what it is actually like to be in a drum and bugle corps for a weekend. You rehearse with the entire brass section, you do visual rehearsal, you eat the meals that the corps eats all summer, and you sleep on the gym floor. It is basically a crash course in the drum corps activity. The first time you auditioned, was the process different from what you expected it to be? Yes. I was treated very well at the audition camp. It was very relaxed compared to what I thought it might be. I talked with the staff members in the room including the caption head and trumpet tech. I then played my etudes and audition materials for them. They talked with me about the rehearsal camps I could make, they told me to work on a few things, and they told me that they would see me at the next camp. After that I went back out and continued to play in the horn arc with everyone else the rest of the weekend. It was way less formal than I thought it would be. Were you nervous at your audition? Yes! I was extremely nervous. I was almost shaking before I went into the audition room. Before I went in I listened to a couple songs on my iPod to calm me down. Talking with the staff members in the room before I started to play calmed me down because they could tell I was nervous. They want you to do your best, so they do what they can to get you past your nerves. What do you think is most important for someone to take away from the audition experience? Take away the experience you gain performing and rehearsing with the drum corps. It's like nothing you have ever done before. For many who audition, they have always dreamed of playing in a drum corps. Take it all in. You now have the opportunity to be a part of the drum corps that you have admired for many years. You have the chance to actually do what you want to do. Any other advice? When you go to the audition weekend, don't be shy. Introduce yourself, talk to the veteran members of the drum corps and get to know them because you will probably be marching alongside them over the summer. Also, be prepared beyond the audition materials. I went to the Glassmen audition weekend in Ohio and didn't look at the weather forecast. After we finished our last rehearsal block of the night we went to load up the buses to head back to the housing facility to sleep and eat. When I walked outside the snow was coming down! The warmest clothing I had brought from Texas was only what I was wearing. That night when I went to sleep I put on about three pairs of socks, a long sleeve shirt, a short sleeve shirt, a hoodie, a pair of shorts, gym pants, and a beanie on my head. I was all curled up in my sleeping bag that was not meant for cold weather, and I slept on my backpack wrapped up in my towel because I had forgotten my pillow. The moral of the story; make sure you have everything that you will need for the weekend! And the last thing is to make sure you have fun! This is why you play your instrument, spin your flag, or play your drum. It is because you enjoy it. Make sure to really have fun, make friends that will last a lifetime, and enjoy your time being with the drum corps. Learn more about corps audition dates, locations and additional info.