Members of the Madison Scouts perform at the 2021 DCI Celebration events at Lucas Oil Stadium.Photo by: Drum Corps International

In many abundantly clear ways, 2021 was drastically unlike any year for the Madison Scouts.

There was the obvious — this wasn’t a normal year for any drum corps, given the shortened tour, heightened health protocols and non-competitive format.

Then, of course, the summer of 2021 marked the first gender-inclusive iteration of the Madison corps. That was originally set to be the case in 2020, but the summer season’s cancellation changed those plans.

READ: Madison will open ranks to all genders

But in terms of the on-field production for the DCI Celebration Tour, the Scouts were operating with a brand-new design team, announced just after the 2019 season. 2021 was the first opportunity for that group to make its mark on one the most illustrious history books the marching music activity has to offer.

“Whenever we do anything that we do, there's going to be a lot of different things that people take from it on their own,” Scouts program coordinator Jason Robb said. “When the design team came on board, and we decided what we wanted the Madison Scouts to be, there's a lot of pressure, at least we feel, from what everyone thinks we should be.” 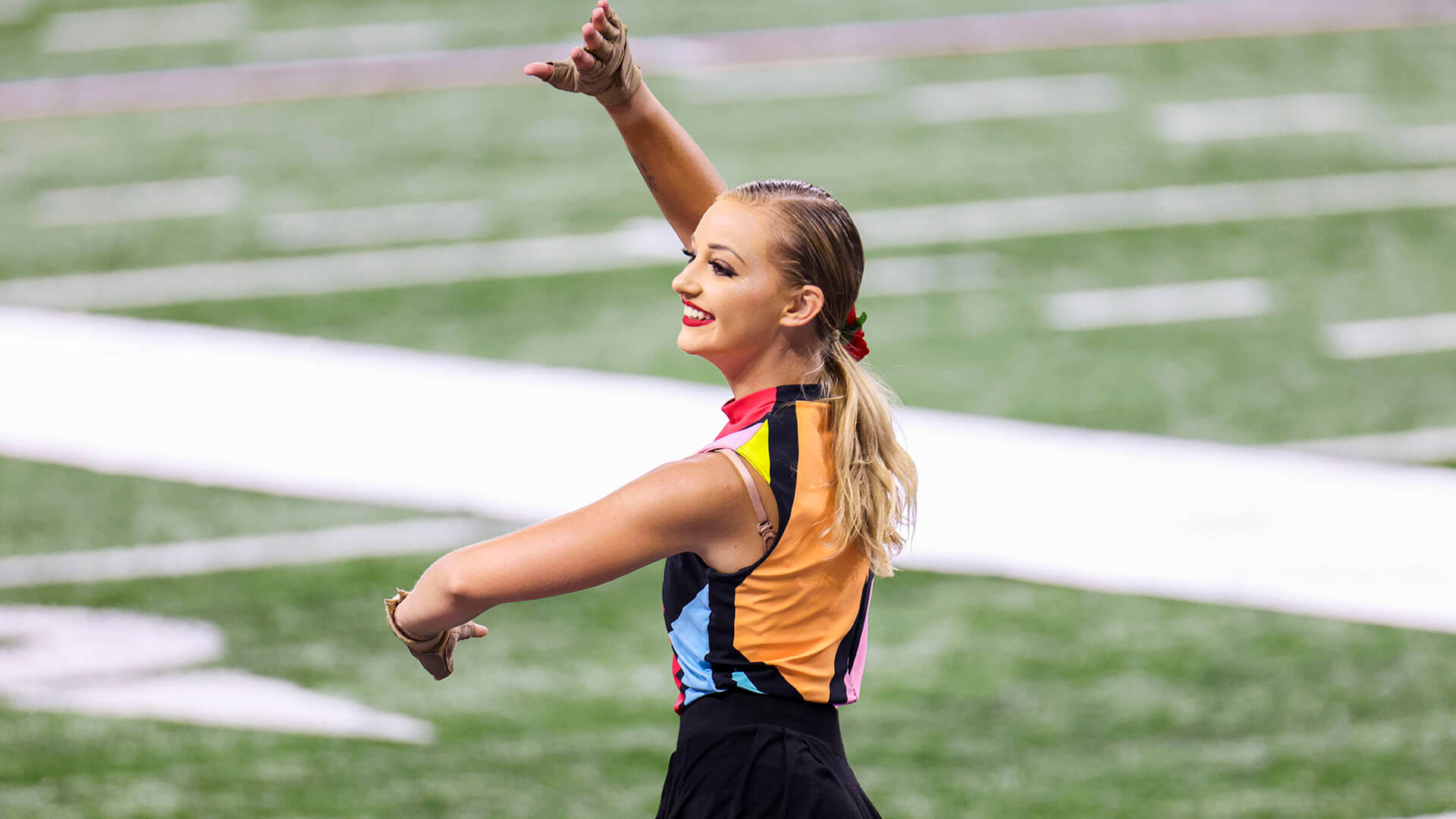 A member of Madison Scouts' color guard performs at the DCI Celebration, Saturday, August 14 in Indianapolis.

Led by Robb, the new-look Madison designers sought to blend decades of rich history with their own flair.

“We know what people love and want from the Scouts,” Robb said. “We're going to give it to you. But we're also going to give you the new Scouts, what we think they should look and sound like.”

2021’s production, “Between the Lines,” was born out of that mindset. When you watch the show, you can’t help but see and hear the textbook Madison Scouts. It’s in-your-face, high-energy and loud, with recognizable melodies.

And of course, Madison brought out its signature green-top, white-bottom, aussie hat look for this past summer to bring it all together.

But brass arranger Daniel Montoya was quick to make it clear — “Between the Lines” was neither a tribute show, nor a throwback show. In many ways, musically, visually and thematically, it was a mash-up.

“This is a fresh take on tunes that maybe the Scouts have played in the past and some tunes they haven't played in the past,” Montoya said. “If you’re an alum, if you're a fan, if you know about the Madison Scouts’ history, you're going to see and hear tons of Easter eggs, little nods. And if you're not, you're just going to enjoy a really cool drum corps show. You don't have to have marched the Madison Scouts to understand and enjoy the show.” 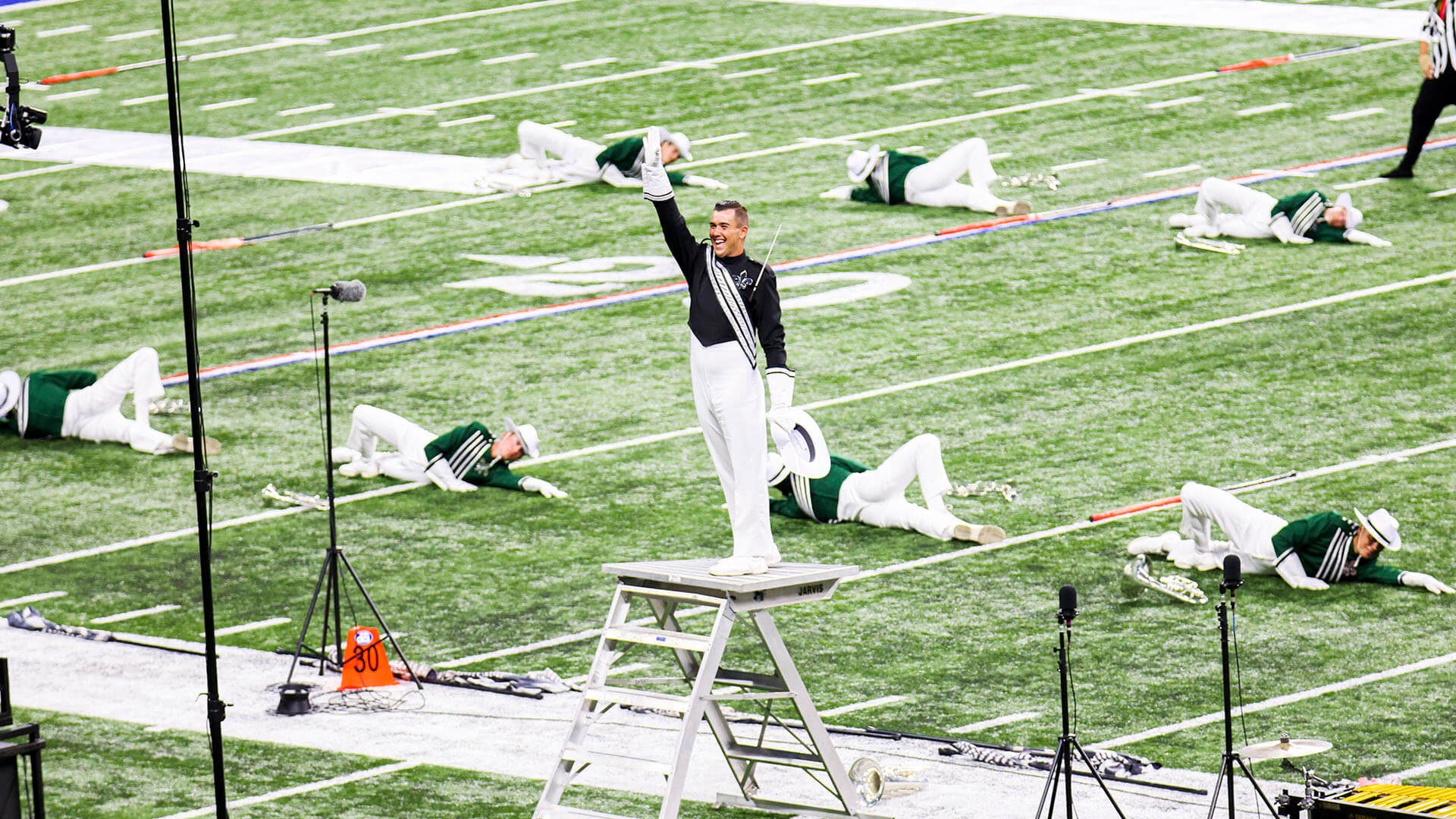 Madison Scouts' drum major addresses the crowd before his corps' performance at the DCI Celebration, Saturday, August 14 in Indianapolis.

Madison Scouts’ 2021 production featured an array of recognizable melodies to the musician’s ear. Every single piece of music — there were 12 in total in Scouts’ official repertoire list — is classified as “Public Domain,” which essentially means they’re all at least 95 years old.

Beethoven’s “Für Elise,” for example, serves as a consistent motif throughout the show, and it turned 211 this year. Other notable selections include Mozart’s “Eine Kleine Nachtmusik” and Grieg’s “Peer Gynt Suite No. 1, Op. 46,” popularly known as “In the Hall of the Mountain King.”

But if you listen to the show, it never feels like century-old music is being played. That’s because of the intentional Latin flair — a flair that has graced many iconic Madison Scouts productions in the past — that was added throughout the show, largely through the influence of the traditional “Malaguena Salerosa” and Georges Bizet’s “Carmen.”

The inspiration for the Latin-Classical mashup, musically-speaking, according to the man behind the arrangements themselves, actually came from an old cartoon.

“There's a ‘Merrie Melodies’ cartoon from years ago, where there’s a jazz Island and a classical island. And I think a saxophone falls in love with a cello player, and it's basically ‘Romeo and Juliet,’” Montoya said. “They ultimately come together, and they play jazzy classical music. So we just said, ‘Take out the jazz and make it Latin.’ And we have our Latin Island, our Cassical Island, and we put them together.”

Both Robb and Montoya touched on their favorite moments in the show, and Robb’s personal favorite in particular brought the Madison flair to life — that being the rotating company front featured in the corps’ closing movement.

Most recently deployed in 2012’s “Reframed,” the challenging move brought the Lucas Oil Stadium crowd to its feet at all three days of the DCI Celebration.

“I wouldn't call it an Easter Egg because it's not subtle at all, but the members are totally nailing it,” Robb said. “And it's just really exciting.”

“The last 45 seconds is arguably one of the most dramatic, exciting moments of this show,” Montoya added.

And that was the ultimate goal — to provide a production that electrified members and fans alike.

In the eyes of Robb, “Between the Lines” did just that.

“It's an opportunity of a lifetime,” Robb said. “And these young performers, for some of them it's their only summer to do drum corps, and we’re just putting everything we can to give them a product that they're excited to perform.”