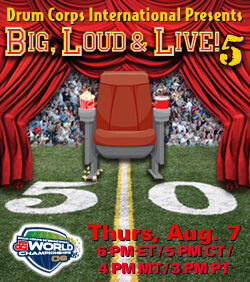 If you can't be there in person for the Drum Corps International World Championships in Bloomington, Ind. this August, the next best thing is to head to your local movie theater to catch "Big, Loud & Live 5," DCI's annual live simulcast of the World Championship Quarterfinals. In conjunction with National CineMedia's (NCM) Fathom Events, Drum Corps International has nearly tripled the number of venues for fans to watch the live digital movie theater presentation in this, the fifth year it has been beamed live to movie theaters across the United States.

The event will kick off in theaters on Thursday, Aug. 7 at 6 p.m. Eastern time, originating from a live satellite feed directly from Indiana University's Memorial Stadium, where all of the World Championship action will be taking place. Tens of thousands of drum corps fans across the country will get the best possible view of the performances, sitting in air-conditioned comfort with hot, buttery popcorn always in arm's reach! And with 340 theaters presenting "Big, Loud & Live 5" in 43 states and Washington D.C., fans who may not have had the opportunity to view the event in range in the past, are now likely to have a theater nearby!

"Our fans asked for it, and we're thrilled to have tripled the number of theaters that will showcase the world's most elite and exclusive marching music ensembles," said Dan Acheson, executive director and CEO of Drum Corps International. "There are now more opportunities than ever for fans across the United States to experience Marching Music's Major League on the big screen."

"Big, Loud & Live 5" will feature the top 15 World Class drum corps performing their competitive programs in their entirety, soaring onto the silver screen in all of their power, pageantry and precision, with high definition video and 5.1 surround sound audio. The event will also include highlight clips of the first five World Class corps that performed earlier in the day preceding the start of the live simulcast.

Visit DCI.org/cinema to watch a movie trailer and to find additional info.

Find a complete list of participating theaters and buy tickets at FathomEvents.com