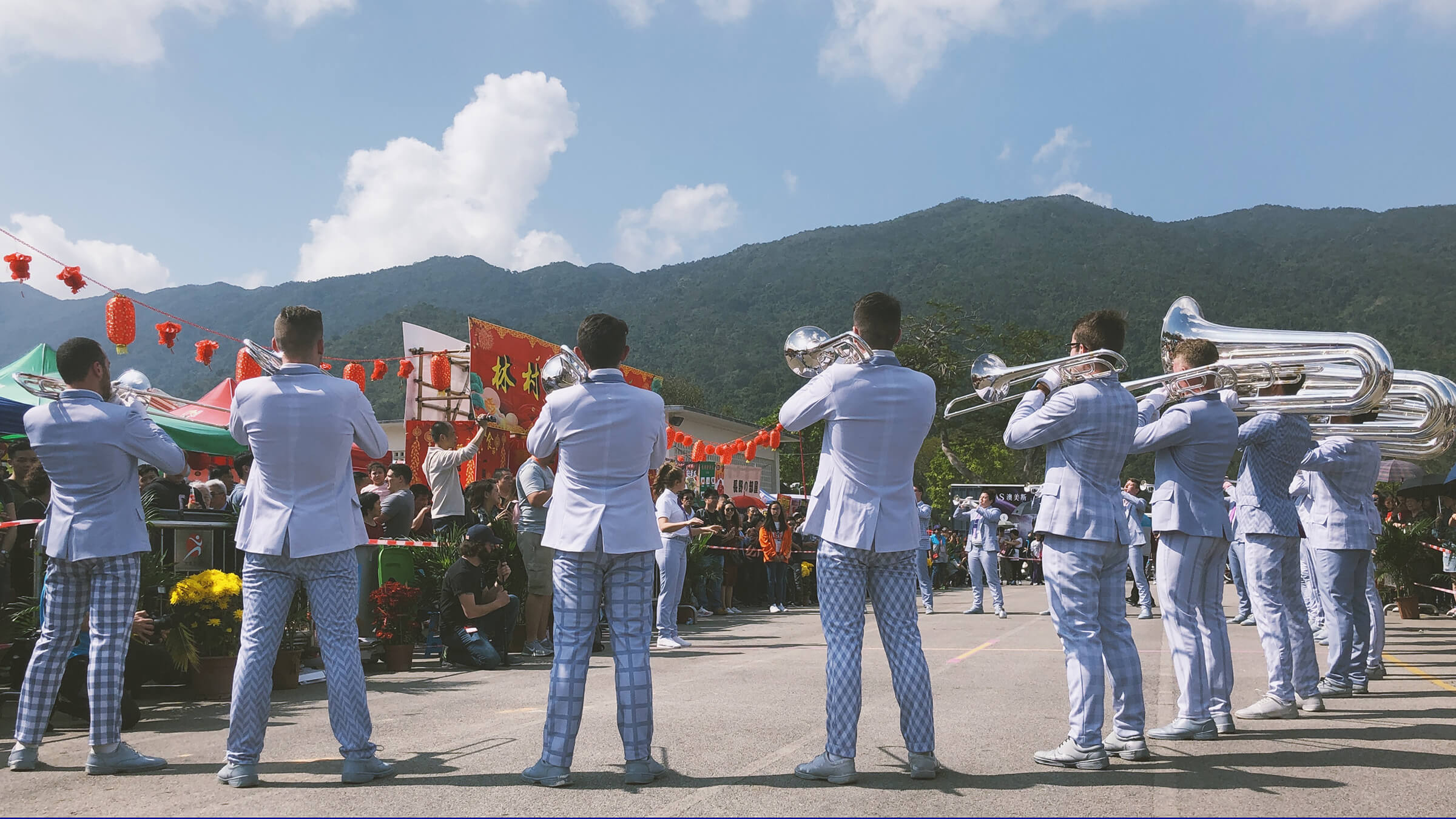 Members of the Bluecoats perform in Hong Kong. Photo by: @Bluecoats

Bluecoats kicked off the month of February with a whirlwind trip through Hong Kong in celebration of the Chinese New Year.

A small contingent of Bluecoats members made the trip to perform as part of the Cathay Pacific International Chinese New Years Night Parade. This marked the second time in three years that the Hong Kong Tourism Board invited the organization to do so.

The Bluecoats opened the opportunity to participate in the trip first to 2018 age-out corps members, filling in performers based on instrumentation and as schedules allowed. Bluecoats CFO/COO Genevieve Geisler said that one of the biggest challenges with the logistical side of arranging the trip proved to be obtaining passports, hampered by the United States government shutdown in January.

“Many people who applied didn’t get them in time,” Geisler said. “Because of the shutdown we had to make a couple last minute substitutions, unfortunately, but it all worked out in the end.”

Wow! We’re starting our journey to Hong Kong off right with a little history lesson at @TheCavaliers!

They were generous enough to host us as when city of Chicago shut down due to the cold! Thanks for sharing your home with us while we prepare for our trip! #blootakeshk pic.twitter.com/WXIdH3tOO8

Thirty-two performers and six staff members gathered in Chicago on February 1 for a day of rehearsal before the group flew out of nearby O’Hare International Airport the following day. With a “polar vortex” bearing down on the city and temperatures falling to some of the coldest recorded in decades, the Bluecoats received some last-minute help from The Cavaliers who opened their offices to corps members when the closure of a local high school due to the wintry weather left the group without a place to stay.

“The Cavaliers opened up their corps hall to us,” Bluecoats CEO Mike Scott said. “Our kids walked in and they slept underneath all of the corps’ DCI championship trophies. It’s not often that a Bluecoats performer would have the chance to see another corps’ headquarters like this.”

After a nearly 16-hour flight, the Bluecoats met up with performers of the Pegasus Vanguard, a Hong Kong-based marching music ensemble, to fill out the ranks of the drum corps for the parade.

What a day! Bluecoats and @thepegasusvanguard are ready to ring in the #chinesenewyear tonight at the @cathaypacific Chinese New Year International Night Parade. PV and @discoverhongkong have been wonderful hosts! pic.twitter.com/B1pcpVvHpW

With little time to rehearse before the event on February 5, Bluecoats staffers had sent music and drill formations to both sets of performers in the weeks leading up to the trip.

“We were able to send out the entire show to everyone in Hong Kong and to all of our members who were scattered across the country,” Scott said. “By the time all the U.S.-based people showed up in Chicago and we met one of our Japanese performers over in Hong Kong, we all had the show learned. Teaching a marching show across 50 states and three countries and putting it all together in a day or so is a pretty cool application of technology.”

Rivaling the likes of the Macy’s Thanksgiving Day Parade in New York, the Cathay Pacific event brings performers into four different "zones" over the course of the parade route to present their routines.

“The first zone is the main one with a huge lit-up stage,” Geisler said. “It’s televised with visiting dignitaries and a lot of stars from television shows sitting in those first sets of seats. There were probably 100,000 people on the parade route, and I believe it was broadcast to many millions of people too, especially in southern China.”

Getting outside of the city center, additional performance opportunities near the Lam Tsuen Wishing Trees, a popular tourist destination around the Lunar New Year, made for one of many highlights of the corps’ week-long excursion.

Here, Bluecoats members found themselves closer to “home” than they may have anticipated thousands of miles away.

“There is a part in the ‘Session 44’ selections we were performing for audiences with a two or three count rest where we had to cover a vocal part,” Scott said. “During the very last performance we gave, a number of Hong Kong drum corps fans showed up, and six or seven of those kids who weren’t affiliated with the Pegasus Vanguard, they were just random drum corps fans who follow us on YouTube, all sang along with us.

“It was amazing! We were all taken aback by it, that we were literally all the way around the world and someone was there singing the parts of the show.”

Outside of performances, Bluecoats members had plenty of opportunities for sightseeing, including a special dim sum lunch atop Victoria Peak which overlooks the harbor that forms the northern border of Hong Kong Island.

“It was really cool to watch the progression of their experience over the week,” Scott said. “We got to see so much, and the Hong Kong Tourism Board did a really great job of scheduling in sightseeing trips for us.”