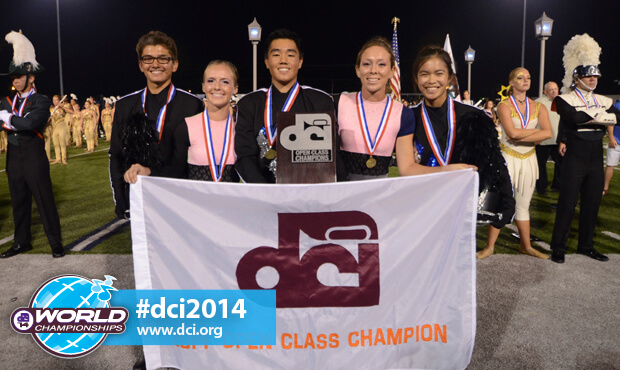 Blue Devils B
Blue Devils B held their Monday night lead and took home the organization's fourth championship title at the 2014 DCI Open Class World Championship Finals on Tuesday, Aug. 5. "It feels fantastic," said corps director Rick Odello following his corps' win at Ames Field in Michigan City, Indiana. "We've worked all year for this. We set it as our goal, and to accomplish our goal brings a great feeling of success." In addition to the corps' overall score of 82.650, the Blue Devils B also took home caption awards for best brass, visual, percussion and general effect. "We were undefeated before coming in second place to the Vanguard Cadets at Semifinals last year, and that brought a fire to us at the beginning of this season," said drum major Albert Lin. "We were focused right from the get go. Everyone was fighting for this." 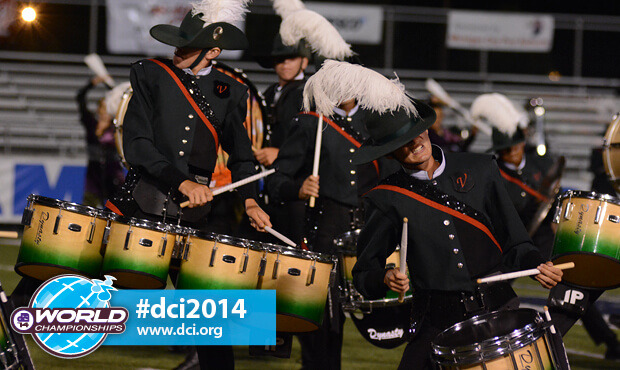 Santa Clara Vanguard Cadets
Last year's Open Class Champions, the Vanguard Cadets (2nd, 81.650) were unable to pull ahead for a repeat, but according to drum major Carl Huang, the corps members aren't hanging their heads. "I don't think we're feeling the least bit defeated," Huang said. "We've definitely gotten a lot of work done this season. Now we have to push as far as we can. We just have to set the standard higher." Genesis, who finished fourth in the World Championship Prelims competition on Monday, surged into third place Tuesday with a score of 77.900. 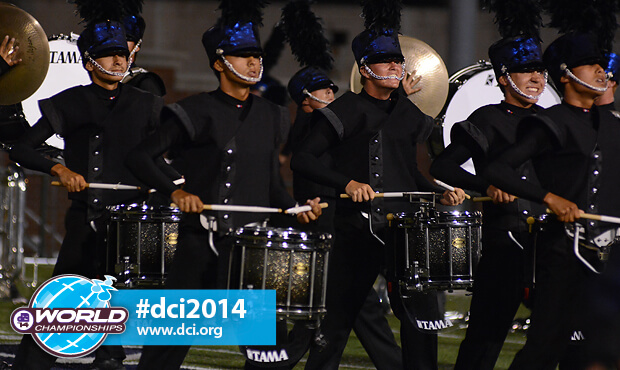 Genesis
"It was like an out of body experience," said age-out color guard member Micah Gause. "We were all on the same page, and all our arrows pointed in the same direction." The corps' 2014 program, "The Art of Darkness," was not the original production chosen and developed for this summer. Even after scrapping the previous show concept at the beginning of June, the corps members' dedication and strong work ethic brought them success. "Our motto this year has been that we don't get up every day, we get up every hour and keep going to work," said Genesis corps director Chris Magonigal. 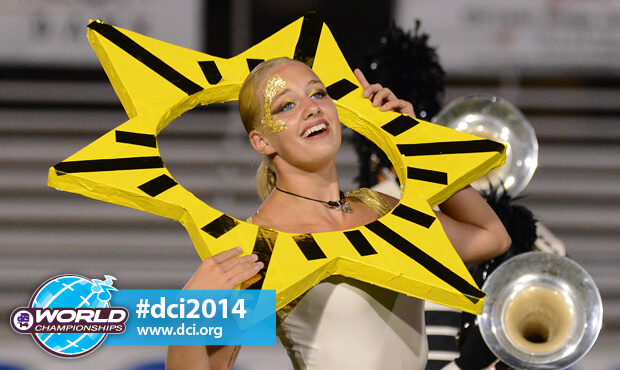 Spartans
The Spartans repeated their same placement from 2013 with a fourth-place finish and a score of 77.025. The New Hampshire corps won the caption award for best color guard. Corps director Richard Rigolini has been especially proud of this year's group. "The members come from pretty diverse backgrounds and talent levels, but they all help each other out, and that's a huge plus for this drum corps," Rigolini said. 7th Regiment landed a fifth-place finish with a score of 75.600. Their 2014 production, "Alexander's Legacy," was the perfect vehicle for a corps on the rise. "We've been building the corps steadily over the past several years, working to put out a better product each season," said corps director Tim Rall. 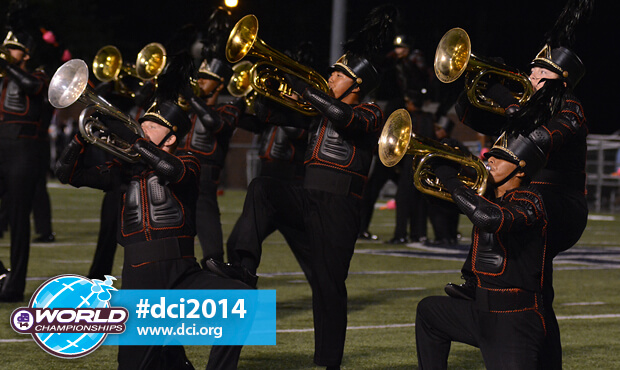 Gold
Gold took home sixth place, earning a score of 74.125 with its performance of "The Journey." The corps from San Diego has come a long way from the start of their 2014 season, and the members have formed a special bond, according to drum major Joselyne Grace. "We are a family. No matter what the judges think or what happens with the show, it doesn't matter. I could care less what happens as long as we work together and go out as a family," said Grace. Following Gold, Legends finished their season in seventh place with a score of 73.700. "This is my first season as drum major so I got to see the corps from a different perspective. It's really cool to see how each section works together and combines to make this whole organization function," said drum major Noah Koch. 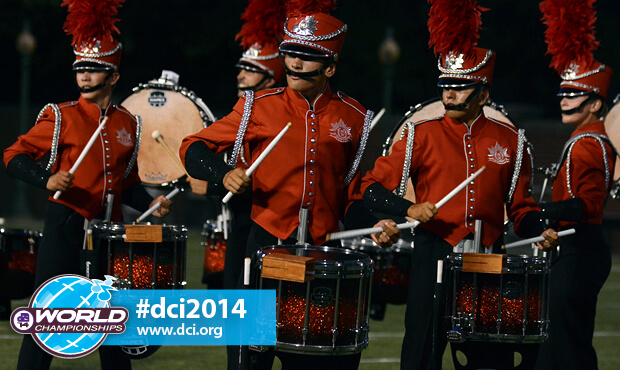 Music City
Music City found themselves in 8th place, scoring a 72.975, but according to corps director David Boggs, the scores don't hold top priority for the organization. "We don't talk a lot about placements. We talk a lot about developing better marchers, musicians, and people," said Boggs. "Scores don't matter, placement doesn't matter, but maxing out our performance, that's what matters." The Raiders followed the Nashville corps in ninth place with a score of 69.100. Drum major Jack Kaplan is looking forward to his corps' performance at Lucas Oil Stadium Thursday for the World Championship Prelims. "While maintaining a level of energy and excitement, we're going to be pushing ourselves to be that much better in order to leave the season with the best memory possible." 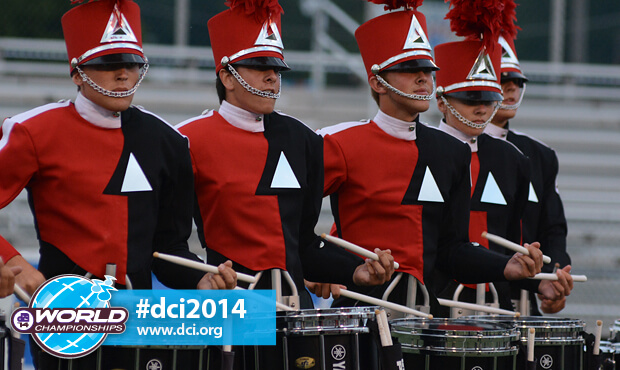 Colt Cadets
Colts Cadets finished in 10th place with an even score of 66.000, and are heading next to their World Championships housing site on the campus of Ball State University in Muncie, Indiana. "They have a giant field house that echoes about the same way that Lucas Oil Stadium does, and because we don't get to perform in those types of venues as often, it will be nice to rehearse somewhere similar" said drum major Jake Barnwell. In Muncie, the Colts Cadets will will meet up with their World Class counterparts, the Colts, a reunion that the corps is looking forward to. "No one supports you more than your own family, obviously, and that's truly what we consider the 'Red Team,'" Barnwell said. "It will be nice to have the whole family together." 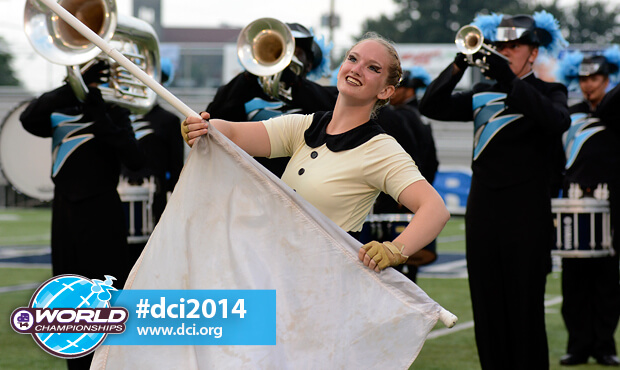 Coastal Surge
In their very first competitive season, Coastal Surge placed 11th with a score of 65.025. "Our performance was very emotional and very excitable but very gratifying because of our tumultuous road to get here," said corps director Eric Thompson. The organization experienced some unforeseen expenses and equipment issues early on in the season, but with faith and fundraising help from "Surge Nation" as they like to call it, the corps pushed its way into the Open Class Finals competition. "Making finals is something that we never spoke of as a staff. All we wanted to do was get the corps members from one housing site to the other safely, get them fed and get them on the field. Anything else is a blessing," Thompson said. 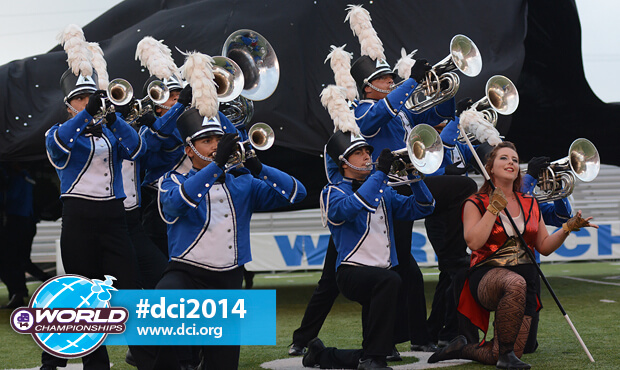 Les Stentors
Les Stentors took home 12th place with score of 61.275. The corps from Quebec finished out the season with a strong performance, happy to make the Finals competition for the second season in a row. "Coming into the Championships we've been working on tightening up tempos and playing together as an ensemble," said Les Stentors drum major Loukas Côt?©. "Some are new to the drum corps, so the trip is new and fun, and for the older members it's cool to participate in Finals for a second time." Patria, the Blue Saints and the Racine Scouts, who were honored with the award for most improved Open Class corps of 2014, performed at the start of Tuesday's event in exhibition. All Open Class will have the chance to compete and perform once again at the 2014 World Championship Prelims event on Thursday, Aug. 7 at Lucas Oil Stadium in Indianapolis.