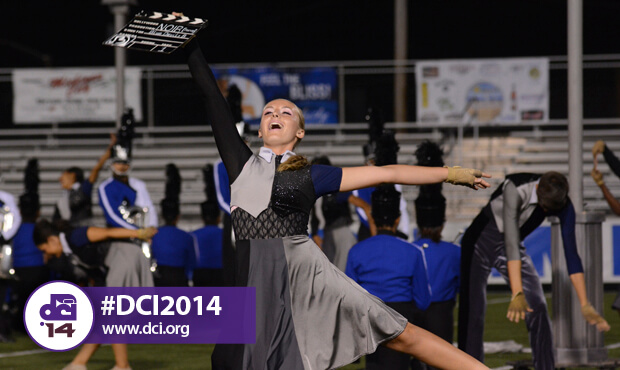 Blue Devils B
Drum Corps International kicked off its 2014 World Championships Week on Monday, Aug. 4, as Open Class corps returned to Ames Field in Michigan City for the first of two days of competition. Blue Devils B, from Concord, California, took to the turf with its 2014 program, "Noir [nuvo]" and claimed first place with a score of 80.825. The performance, which borrows the use of shadows, angles, and dark story lines from the German Expressionist movement, struck a chord with the audience members and left them on their feet. "Tonight the whole corps clicked as one, and I'm left speechless at how they performed. It was an amazing experience to conduct them and to lead them," said Blue Devils drum major Albert Lin. "Now we're going to relax for the night and get some sleep. I'm sure everyone's up to work harder tomorrow to prepare for our last performance in the Open Class Finals." BDB finished first in overall General Effect, Percussion, and Brass. A third-place finish in Color Guard put the corps second in the overall Visual caption. 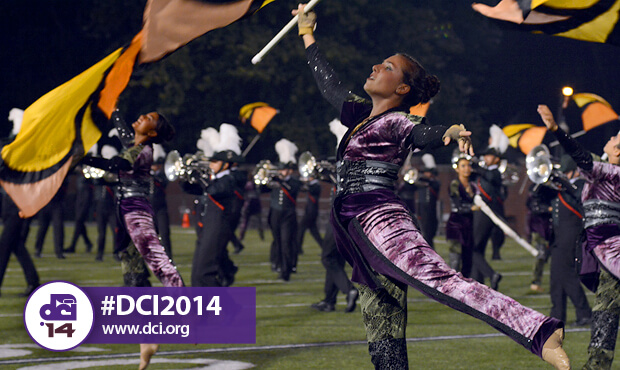 Santa Clara Vanguard Cadets
Last year's Open Class Champion, the Vanguard Cadets, scored an 80.050 and earned second place overall, taking home first in Color Guard and first in overall Visual. Both of these California corps passed the 80-point mark tonight for the first time all season, and Vanguard Cadets drum major Carl Huang hopes that his corps can ride that momentum to another World Championship title. "Even though our standard was set last year, we have to set new standards for ourselves. Perfection may be impossible, but you can always find new levels of excellence along the way," Huang said. "We're going to wake up in the morning, get out to that field, turn the met on, and work." 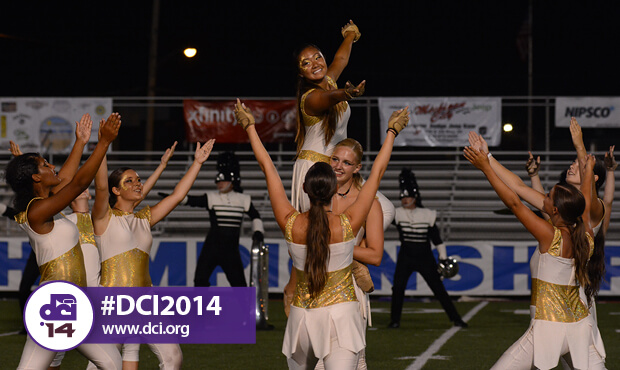 Spartans
Spartans swept in with their performance of "Olympus" and landed a third-place finish with a score of 76.875. Genesis came in fourth with a score of 75.925, and 7th Regiment followed closely behind in fifth with a score of 75.275. According to Gold drum major Joselyne Grace, the corps started small and uncertain of themselves, but that adversity brought them closer together, motivating the members to push themselves even harder. The corps from San Diego placed sixth with a score of 73.725. "Our show, 'The Journey,' means a lot to everyone in the corps," said Grace. "We each have our own story to tell, our own journeys to share, and this show is a compilation of those." 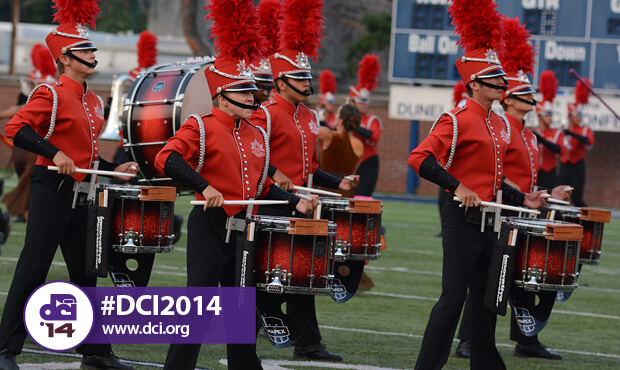 Music City
Music City (7th, 72.825), Legends (8th, 72.400), Raiders (9th, 67.900) and Colts Cadets (10th, 65.175) will all have the opportunity to compete in the Finals competition on Tuesday evening, hoping to bump their scores and improve their placements. Coastal Surge, a first-year corps from Myrtle Beach, South Carolina, took home 11th place with a score of 64.575, also good enough to advance Tuesday's competition. The only word Coastal Surge drum major Katie Cashwell could use to sum up her corps' inaugural season was "surreal." 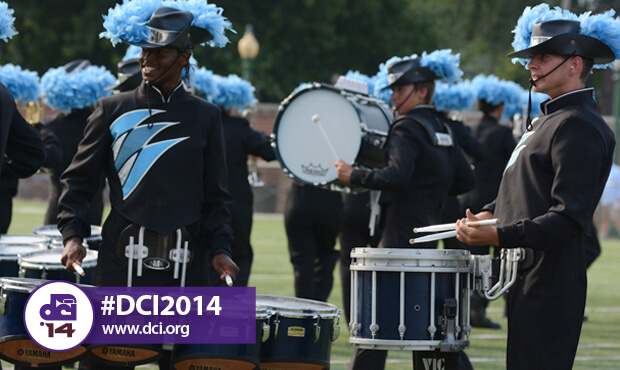 Coastal Surge
"We asked our visual caption head if he thought we were going to make it and he told us that many days he wasn't sure," Cashwell said. "Now we're standing here and I don't think it's really hit us yet, but we're loving it." Their first experience as a competitive ensemble came with stress and challenges early on, but looking back, the corps recognizes great improvement in stamina, both mentally and physically. "Day one, we had contras that couldn't hold their horns up for five minutes, and now they don't put their horns down until we leave the field," Cashwell said. "We finish our runs and then ask to do another." 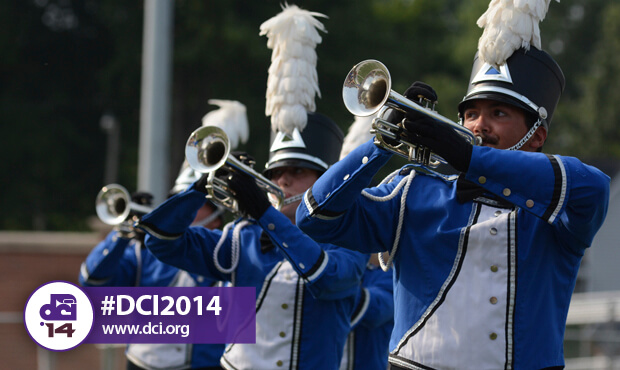 Les Stentors
2014 is the second year in a row Canadian corps Les Stentors (12th, 60.850) will earn a spot among the Open Class finalist corps. Racine Scouts (13th, 58.850) and the Blue Saints (14th, 50.075) will not advance on Tuesday, but will still have the opportunity to perform in exhibition at the start of the event. Even with a 14th-place finish, the members of the Blue Saints from Sudbury, Ontario, Canada have shown great progress from the start of their season. "The fortitude these kids have to keep pushing regardless of what score we get, it really is amazing," said Blue Saints drum major George Martinez. "They performed their hearts out tonight, and the energy was so high." 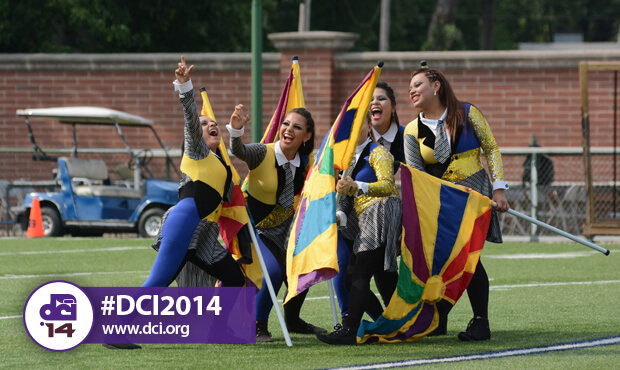 Patria
Patria Drum and Bugle Corps traveled hundreds of miles to Michigan City from the country of Guatemala to perform their 2014 program, "Todos Es Posible," which translates to "Anything is Possible." The corps competed in the International Class division and earned a score of (43.950). On Tuesday, the top-12 scoring corps from tonight's event will make their way back to Ames Field to advance in the Finals competition and for a chance to be named 2014's World Champion. The non-advancing corps will also make an appearance, performing in exhibition before all 15 ensembles make their way to Indianapolis for the World Championship Prelims at Lucas Oil Stadium on Thursday, August 7.