A spectacular flood of incredible memories celebrating the far past, near past, present and even the future of the Blue Devils were conjured by the events of the organization's 50th anniversary celebration party held Aug. 3, 2007 at the Sheraton Hotel in Palo Alto, Calif. 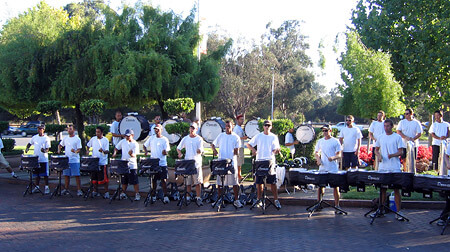 The Blue Devils drum line performs at the corps' 50th anniversary celebration.
The event started out in grand fashion with a standstill performance by the Blue Devils "A" Corps. The group members warmed up with the corps' traditional "space chords," played a little bit of their 2007 show, and for the old-timers played the corps' famed rendition of the band Chicago's "Free." Many showed up from the corps' entire history; including when the group was still a drum and bell corps prior to longtime director Jerry Seawright converting the ensemble to a drum and bugle corps in 1970. And the rest, as they say, is history. Six years later, the corps had earned its first of 12 Drum Corps International World Championship titles. Tonight celebrated what bringing excellence and great experiences to young kids is all about. "Tonight's celebration really surprised me," said Mike Moxley, director of the corps from 1984-1990. "Dave Gibbs (current Blue Devils director) has been really gracious in including me in the continuity of the organization. When he called me and asked me to come, I anticipated this event would mostly be the parents of the current corps. I didn't anticipate seeing all of the kids from past corps whom I had taught and worked with. What a great surprise and delight to see all of the alums here." Throughout dinner, a silent auction of items and services dedicated by corps alums and friends of the corps was held, raising a stunning amount to benefit the corps. Of particular interest was a series of very special memorabilia owned by the late Jerry Seawright, donated by his family. Items such as Seawright's own corps jacket and DCI Championship rings aroused much passion among the bidders and contributed to the funds raised in support of the corps. After dinner, a 50th anniversary celebration cake was cut by Ann Odello, wife of the founder of the Blue Devils Drum and Bell Corps, Tony Odello, and Gwen Seawright, wife of Jerry. 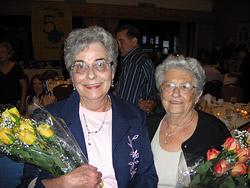 Gwen Seawright and Ann Odello
"I was very, very proud to be here, especially in Jerry's memory," said Gwen Seawright. "He would be so proud. I'm so proud of him for what he did for the corps and all the kids. Blue Devils meant everything to Jerry. They were 'his kids,' which is how he referred to them." A special video was shown in tribute to both Jerry Seawright and Gail Royer, the late founder and longtime director of Santa Clara Vanguard. The video featured clips from the mid-1970s Blue Devils corps performing the emotional "Chase the Clouds Away" and Santa Clara Vanguard performing "Send in the Clowns," ending with close-up photos of both Seawright and Royer. Both men were intense rivals, but also extremely close friends. They created a bond between the two West Coast corps that lives to this day. "We've been working on this evening for about a year and-a-half. The Blue Devils organization has a strong heritage and connection to the past and the past is still connected to the current day," said current Blue Devils director David Gibbs about the celebration. "I'm happy to be part of an organization that can sustain 50 years. When we come together, it's like we were together just yesterday, even though it might have been 10 or 15 years since we last saw each other." After the party, many of those in attendance went over to Stanford University Stadium, only a couple blocks away, to witness a performance of the current corps' 2007 competitive program "Winged Victory." "Tonight was a celebration of 50 years of excellence, quality of education and quality of experience for young men and women that Blue Devils has provided," said longtime Blue Devils brass arranger Wayne Downey. "Tonight celebrated what bringing excellence and great experiences to young kids is all about."