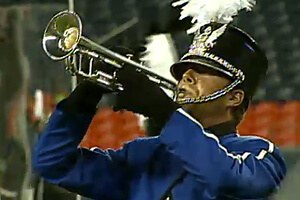 Blue Devils
Mile High Stadium in Denver, Colo. has a storied drum corps history, hosting the DCI World Championships three times with an even longer history as the site of the annual Drums Along the Rockies DCI Tour event. Another page in the history books was written on Saturday, July 10 as eight corps took the field for competition at INVESCO Field at Mile High. One of the most anticipated matchups of the weekend was that between the Blue Devils and the Cadets. Though the two corps had been trading off high scores and first place spots at their respective 2010 events, the two corps hadn't gone head to head for a direct comparison until Denver. In the first East vs. West showdown of the summer, the 2009 DCI Champs were first to establish their dominance, taking first place with a score of 88.000, putting them more than two points ahead of the Cadets' second place score of 85.700. The Blue Devils' 2010 production "Through a Glass Darkly" with its use of dissonant chord structures, electronic sound effects and more than 30 prop mirror panels which corps members wheel around the field to create various visual effects, is one fifth-year drum major Brian Howard admits may need some time to sink in with critical fans. 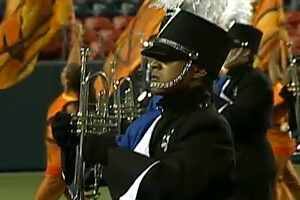 Blue Knights
"I think some fans might be kind of confused about what we're doing and what we're playing which I can understand," said Howard right after the corps got off the field in Denver. "There's a lot of stuff going on in the show. The mirrors add a lot of depth, and the music isn't something you can just hum along with. It's different—not your average drum corps show." Another highly anticipated matchup in Denver was between the Blue Knights and Santa Clara Vanguard. Three days before in Ogden, Utah, the Blue Knights finished the night ahead of the Vanguard for the very first time in any competition since the founding of Drum Corps International in 1972. The closest the Blue Knights had come to accomplishing this feat before doing so Wednesday was in a San Antonio prelims competition back in 2005 when the Denver corps came within .150 of a point. Though Santa Clara (3rd, 83.500) ended up back ahead of the Blue Knights (4th, 82.400) on Saturday, BK's members will no doubt be looking forward to getting back to the rehearsal field after they take a well-deserved day off on Sunday. 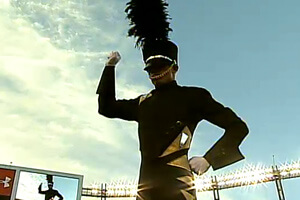 Glassmen
"Right now we're in the cleaning process with our production," said Blue Knights drum major Jordan Helwerda. "We'll be adding in choreography, and we have some drill changes coming up to put in. This next week will be a push to clean [the show] up before coming into our next major competition next Saturday in Minneapolis." Helwerda says that it's a treat anytime the Blue Knights get to return to their hometown to feed off the energy radiating from a supportive crowd. Over the next few weeks he said, "We're going to keep working hard, keep the morale and emotion up in the drum corps, and keep our momentum going that we've gained coming home here and seeing our families." Taking fifth place at Mile High was the Glassmen with a score of 77.650. In sixth and seventh places respectively the Colts (74.900) and Troopers (74.250) are once again very close in score. That's been a common theme dating back to last August when the Troopers edged out the Iowa corps by three tenths of a point to lay claim to the last spot in the World Championship Finals competition. 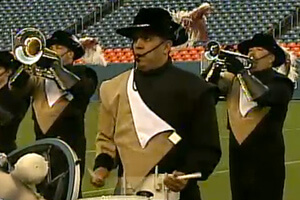 High Country Brass
Starting off Saturday's event, was the all-age corps High Country Brass which scored a 59.220. 2010 is the first year this local group has been approved to compete as part of Drum Corps International Tour events. High Country was sharing a hometown crowd with the Blue Knights on Saturday, and the corps' performance was one drum major Drew Tyburczy said had "a lot of energy coming off of it." Joking about the age of corps members who he says couldn't stay away from the drum corps activity after reaching the age of 22, Tyburczy said, "For a bunch of old guys they definitely pulled it up and really buckled down tonight. The crowd gave us some good feedback and helped reignite the corps." Tyburczy says the corps is looking forward to its Drum Corps Associates (DCA) competitions later in August with a goal of reaching the Class A Finals competition at the DCA World Championships in Rochester this September. All performances from the Drums Along the Rockies event are now posted on the DCI Fan Network for on demand video playback. Exclusively for Fan Network subscribers, on demand video will be available from 18 select DCI Tour events this season. Visit the DCI Fan Network. View a complete recap of scores from Drums Along the Rockies. Contributing to this report: Amy Fallon, Michael Boo.