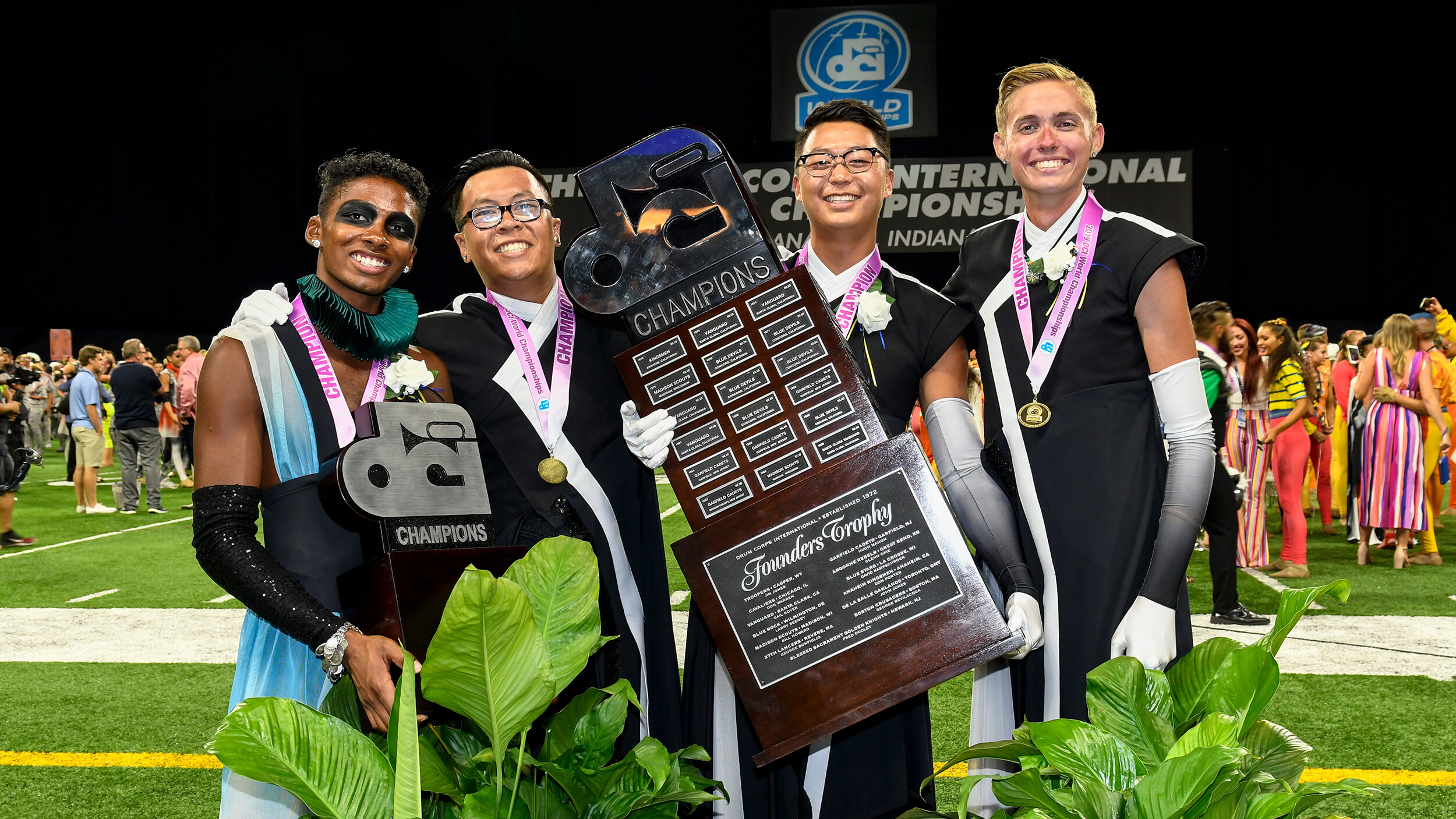 The DCI Hall of Fame public address announcer rattled off the names of 10 corps, their placement and score. Then he began the words that the drum corps world has painstakingly anticipated.

Blue Devils drum major Chasen Young stood right near the 50-yard line on the stadium's front sideline, flanked out to the right of Blue Devils’ four retreat representatives. His shako forming a shadow that made his eyes unnoticeable, his stomach churned with butterflies fueled by uncertainty.

Crocker continued, opening his mouth to conclude the 2019 season, to stop the debate, to finally put to an end a neck-and-neck, season-long race that has transformed into one of the most compelling in drum corps history.

The Blue Devils had won.

A grin fell over Young’s face, over the faces of his fellow drum majors and the faces of everyone associated with the Blue Devils. Their trophy-laden history added its 19th piece Saturday night.

“This is what we came here to do and we did it. It was truly the culmination of everything we’ve worked toward for so long now,” said Blue Devils drum major Chasen Young. “I’ve never had the privilege to be with such an amazing group of people with just an entire complete outward push to the end. We could not be more pleased.” 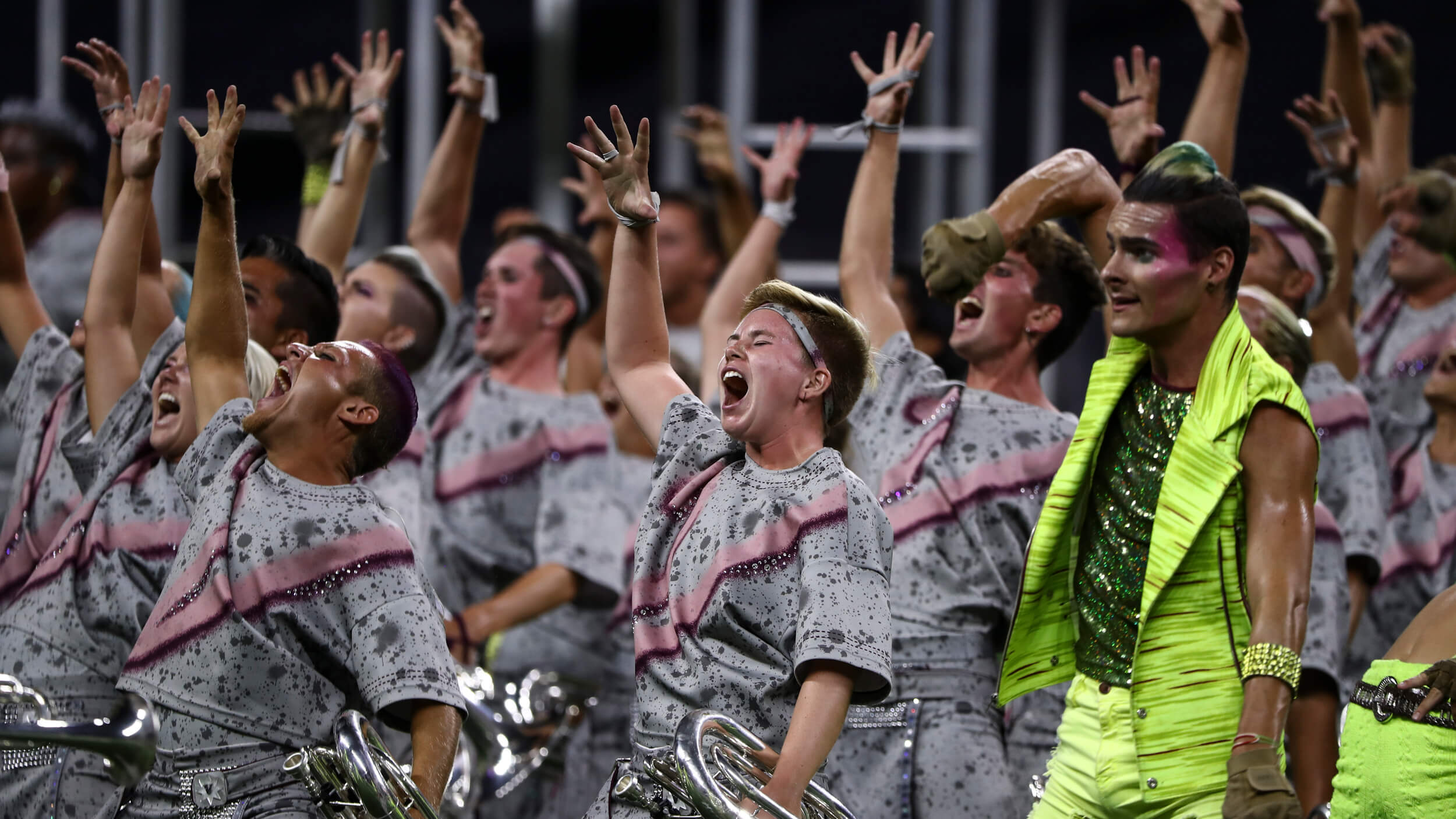 Blue Devils’ win marks the 19th championship in corps history, the first since 2017, and the sixth since 2010. The Concord corps earned the John Brazale Award for Best Visual Performance by a commanding margin.

“It’s crazy,” said COO of Blue Devils’ System Blue brand Allan Murray. “The 19th championship means excellence, commitment to excellence, attention to detail and a wonderful organization from the top all the way down. Everything about the organization just takes it to a different level.”

“I can tell that everyone left everything they had on the field,” Bluecoats drum major Peyton Grunzke said. “All the people who didn’t necessarily perform in the show but still put a lot of work into creating it are proud and happy with the product that we put out.That’s all that really matters.”

Santa Clara Vanguard earned its third-consecutive medal position with a third-place finish Saturday night. In the past three years, Vanguard has earned each of the three medals, and made it four years in a row taking home the Fred Sanford Award for Best Percussion Performance.

“It’s just been an incredible finish,” Vanguard drum major Andrew Arbouzov said. “Incredible show, testing individuality from the very start I think that we’ve all been able to accommodate that within our own concept of the corps as well as the show. We were able to find our image.”

While Carolina Crown earned fourth place for the second year in a row, the Fort Mill, South Carolina corps improved upon last year’s final score by more than a point. Crown also took home the Jim Ott Award for Best Brass Performance for the third time in four years, while also taking home top marks in the music captions.

“Unbelievable, absolutely unbelievable, Carolina Crown drum major Michael St. Ores said. “That crowd. There’s nothing like it. At the end of the show, the energy was enough to rip a hole in that stadium.” 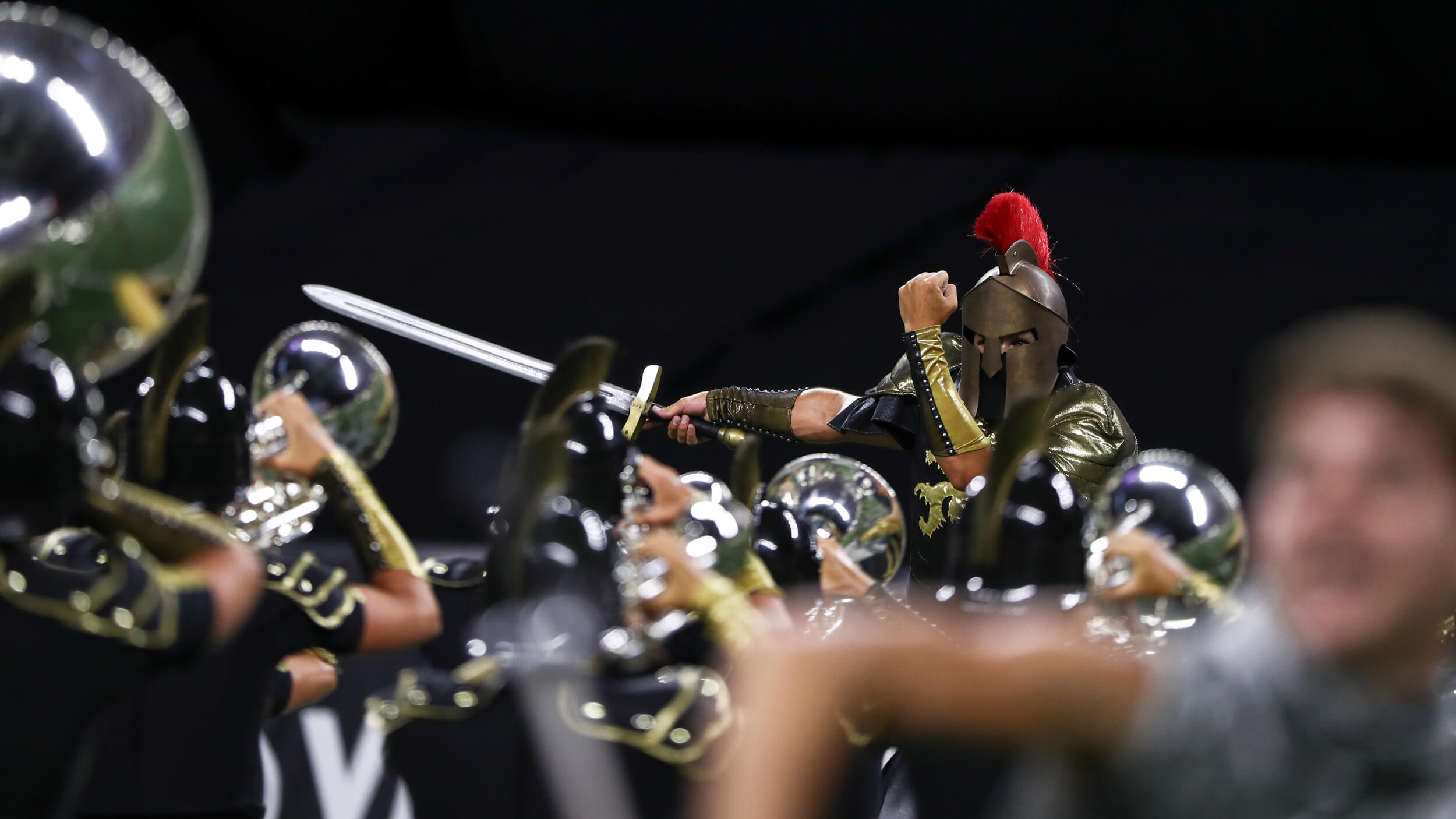 The Cavaliers moved back into the Top 5 after falling to sixth a year ago. Saturday’s score is the corps’ best final number since earning a tally of 96.500 in 2011, its last time earning a medal.

“Honestly, sometimes it’s been kind of hard to believe because you’re just along for the journey and whatever happens, happens,” Cavaliers timpanist Isaac Merriweather said. “In retrospect, it’s been a long journey but it’s been worth it. I wouldn’t want it any other way.”

“I’m just so happy to be in drum corps right now,” Boston drum major Josh Ballinger said. “This is my third year marching in a corps and this is the first time I’ve seen our best run on Finals night. It’s a special feeling ... I feel like we’re becoming the corps that‘s known for doing the things that people don’t think possible.” 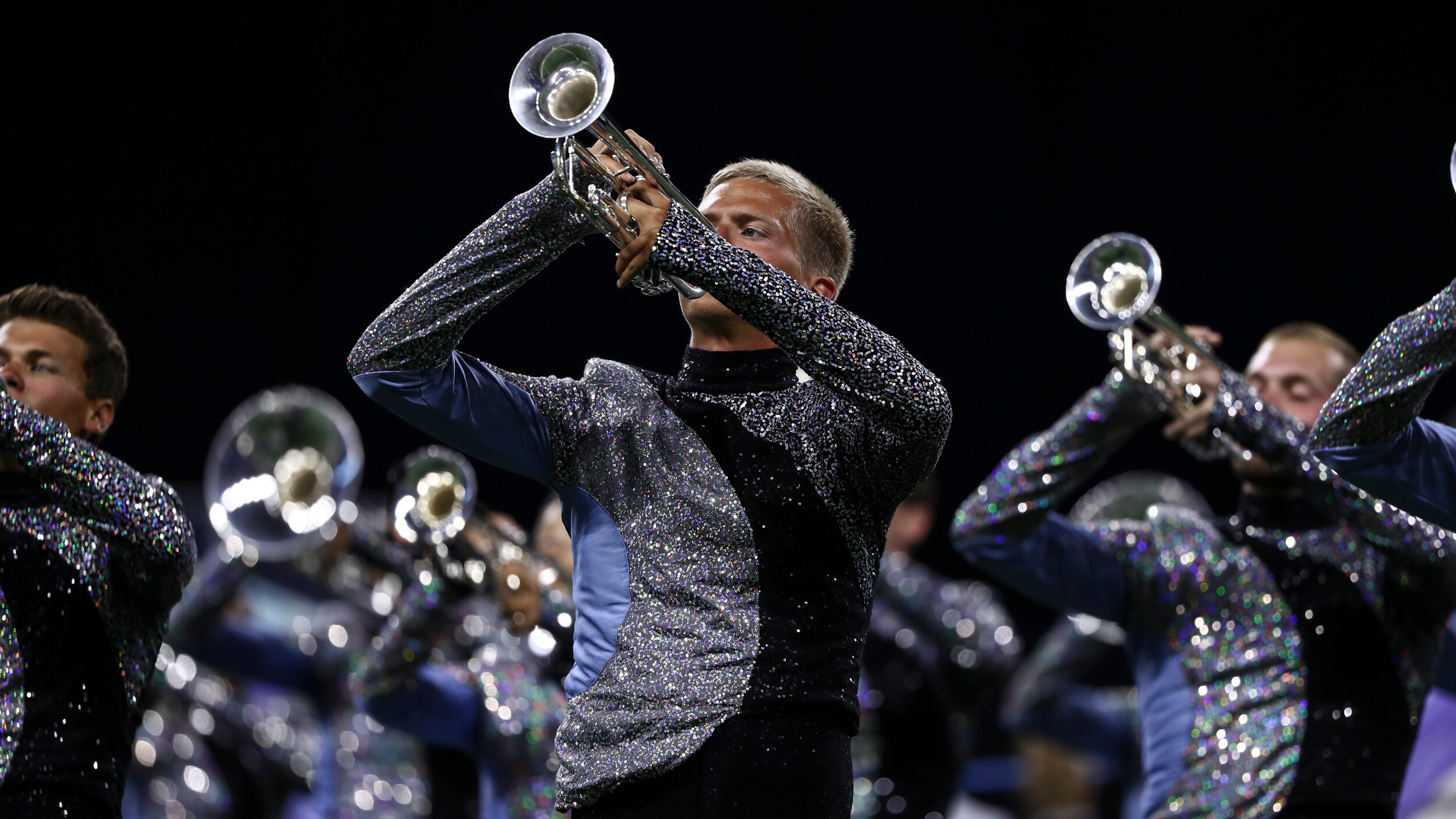 Blue Knights earned their best finish since 2017 and matched their second-best placement of all-time, while also earning their highest season-ending score since 1999 and second-best ever.

“I really didn’t know what to expect but I’m happy with everything that came out of the season,” Blue Knights’ vibraphone player Chaiya Odle said.

Blue Stars earned their second-straight finish of eighth place, which matches the corps’ best finish since 2010. The Wisconsin corps, however, improved upon last year’s final score by more than a point.

“You can tell everybody absolutely loves this,” Blue Stars drum major David Billodeau said. “I love this corps … I can’t wait to come back next year and throw down like this again. I’m already ready for next season.” 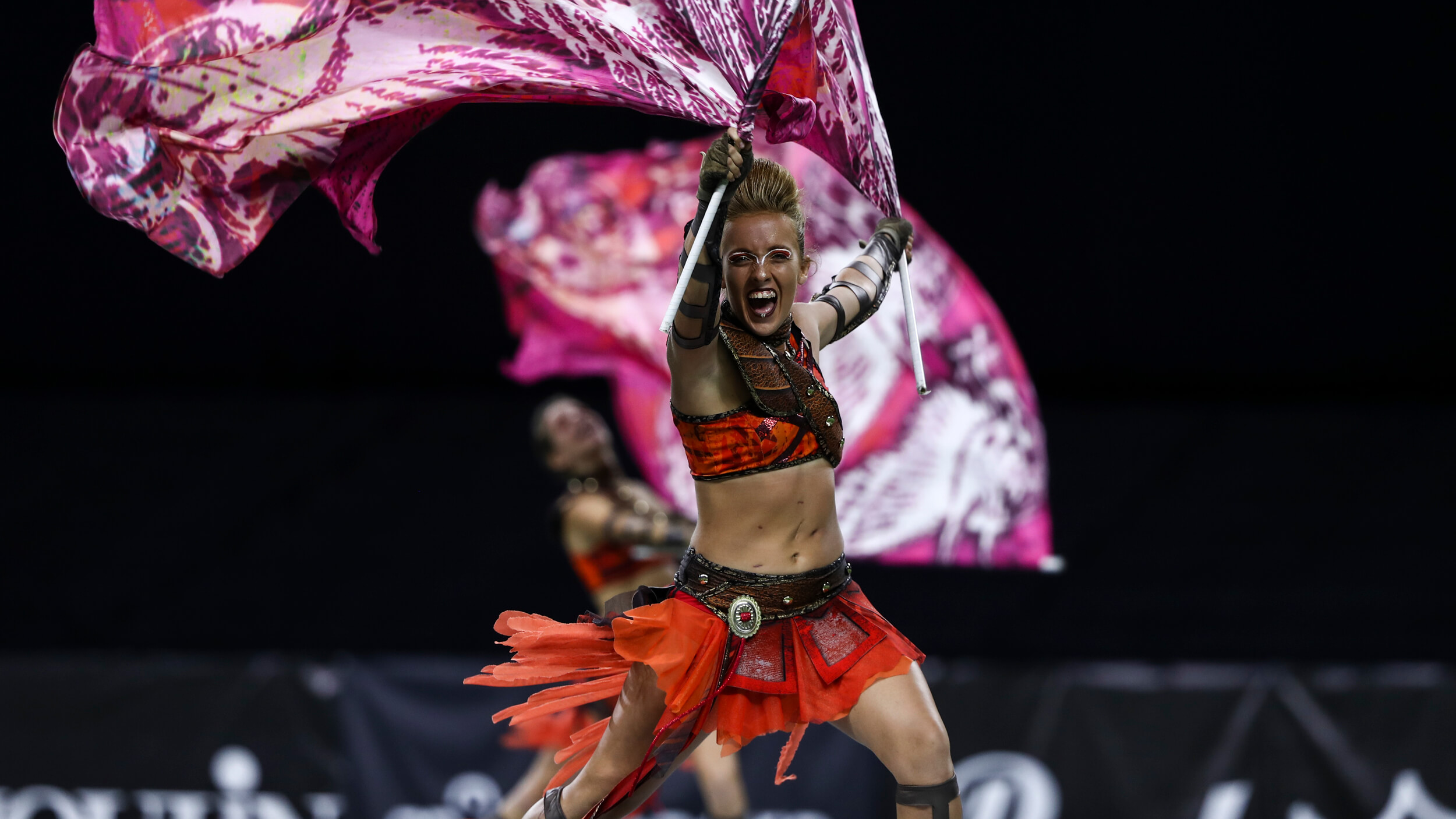 Led by a fifth-place percussion subcaption, The Cadets wrapped up the 2019 season in ninth place. With Saturday’s finish, the Allentown corps continued a streak of Top 10 finishes that dates back to 1980.

“We’ve worked so hard for the entire season and for us to come out and do that,” The Cadets’ trumpet player Zach Walter said. “We just went out there and threw down three times, three nights in a row just to be able to say ‘I just did that!’ It’s incredible.”

Mandarins made it back-to-back Top 10 finishes in their second-ever appearance at the DCI World Championship Finals. The Sacramento corps set its best final score in 17 years as a World Class corps.

Crossmen improved upon its 12th-place finish in 2018, matching its 2017 placement thanks to what were once again strong visual numbers.

“That was special. That was really special,” Crossmen drum major Lydia Marshall said. “We worked so hard this year; we’ve done things that this corps has never done before and to walk off this field with pride right now is the only thing that matters this season. It’s nothing short of incredible.”

Phantom Regiment extended its streak of Finals appearances to 46 years and set the new all-time record for the highest score of any 12th-place finisher.

“It’s not a feeling I can put into words,” Regiment conductor Claire Wilcox said. “Seeing these people that I love so dearly pour their hearts out for something that I also hold very close to my heart, it’s incredible.”