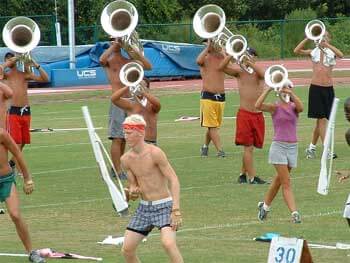 Mike Gurrola (front, with rifle) rehearses with the Blue Devils.
The Blue Devils worked on tempo consistency during their semifinals rehearsal Friday at First Academy in Orlando, Fla. Brass caption head Wayne Downey said the corps focused on a key section of the opener. "The 'oom-pas,' the part that goes 'oom-pa, oom-pa,' the transition into that is important," Downey says. "We're working on making that crystal clear. The first part of the show was tentative last night with the wet grass. We were on and off the bus during warm-ups last night. The opening of the show is so physical and the demands are so great that if you're not physically ready, the emotional part will be less accurately communicated." Like the Cavaliers, the Blue Devil members and instructors are aware of their close race for the world championship, but it's not their primary motivator. "We try not to focus on that," Downey says. "The night of finals, the goal is to reach our top performance level. We're working to see how much further we can develop and reach our peak potential. If the definition of success is competition, only one group is a success each night. So we try to focus on group success." "(The championship) is definitely in the back of my mind," says Mike Gurrola, a second-year member of the rifle line. "But I'm more working on my individual performance." Gurrola says the corps has had a productive week of rehearsal, despite periodic rain interruptions. "We did our run-through earlier yesterday to fit it in," he says, "and then did a visual block after the rain." Gurrola says the BD guard is tying up loose ends in the show. "We're re-clarifying check points and hitting individual errors." Gurrola is confident the corps will perform well at semifinals. "Last night, our show was awesome, and we're excited about tonight."