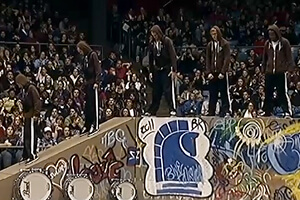 Blue Knights
Several groups with ties to Drum Corps International organizations had strong finishes at the 2011 WGI Percussion World Championships this past weekend in Dayton, Ohio. Finishing in sixth place in their 18th year as Independent World Class Finalists, the Blue Knights brought fans to their feet with a production featuring an urban streetscape set and parkour-esque high-flying acrobatics. Though not medaling with a score of 92.025, BK did capture the WGI Fans' Favorite Award. Also in the Independent World Class, the Glassmen-affiliated Matrix finished in eighth place with a score of 90.188, while Oregon Crusaders Indoor, in its first year competing in the Independent World, finished in 15th place (82.300). After Santa Clara Vanguard's color guard took top honors at the WGI Color Guard World Championships last weekend, eyes fell on Vanguard's percussion ensemble in anticipation of how the group would fare in its first-ever trip to the WGI Championships. The group, which is only in its second year of existence, didn't disappoint with its production "The Wave." Vanguard took the Independent Open Class gold with a score of 93.875. The Cavaliers' Green Thunder Percussion improved three spots from its prelims performance to finish in seventh at the Independent Open Finals (89.025), while Pioneer Indoor missed a finals berth with a 16th place finish in the prelims (82.238). Legends Percussion ended with a sixth place finish in round one of the Independent A Class Prelims with a score of 84.425. View all World Championship scores and more at WGI.org. Photo courtesy WGI Fan Network.