"We've had the honor of being the first corps in Championships Week for the last three year!" said the self-proclaimed "Chief Bottle Washer." 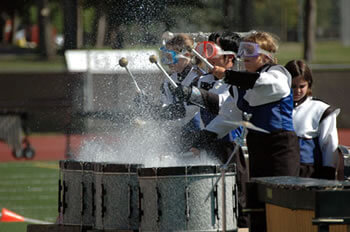 Blue Saints
They are one of the smallest corps in DCI, have the smallest budget of any corps and can boast to having the youngest members (two five-year olds). They live in an area with no music programs and no drum corps circuit. Lively Canada is hours from Toronto, basically in the wilderness, but it is home to this entertaining corps with drive and passion enough for any program. Director Mark Ripley took over Blue Saints four years ago – "unwillingly," Ripley noted – when his daughter wanted to play horn and there wasn't anything around. In addition to directing, he teaches all the lines except the guard. The lone guard girl, Tiara Rioux, wrote her own work by watching drum corps videos. There are seasonal challenges but Riply is actually proud that the corps made it here. They started in March with eight kids at the first rehearsal. One of those performers was Danny, a 20 year old trumpet player who has been with the corps for six years. As a 13 year old playing snare, it soon became too difficult to march when he developed rickets – a lack of calcium to his bones. From there, he moved to trumpet and even played mallets a bit. Why would a young man want to continue with the same Division III corps, year after year? "There is an honor representing my city. Plus we're very community oriented," said Danny. "I've seen this corps at rock bottom when they only had a van to carry all the equipment. I've watched it grow over seven years, then Mark took over and got us busses, etc. I have hopes that they can grow in a couple of years to a top Div. III corps." Like a proud dad, Danny talked about the line he helps teach. "The drum line started three years ago when most were 13 years old. Now at sixteen, they have matured and have a bond. "Now they shove ME into the lockers," he laughed. Danny has plans to teach at Blue Saints after he ages out next year. It's not all rehearsing for this group. Riply understands that youth needs diversion. "We didn't rehearse yesterday. Instead the corps went to a museum." In addition to the 30 corps members, the tour contingent included two grandparents and one uncle from Hudson Bay. "And," Riply pointed out, "this is our tour. We did six to seven shows in Chicago and a few parades to make money to get here." Their show, "Endless Summer", is based on Beach Boys music. Including "Beach Baby", "Surfer Girl"and audience-clapping "Kokimo." Their most entertaining production, however was the "Wipe Out" drum solo with a clever Blue Man Group water-on-bass-drums stint, the horns using soakers getting the audience, judges, and frantic photographers everyone on five-gallon water bottles and then pretending to surf. 20-year old baritone Tyler Depatie has been with the corps for only two months. His friend Danny who has been involved with the corps 'his whole life' took him to rehearsal one day and that was all he needed. He joined the next day and has been in love with the activity ever since. How was it to be the first corps on the field? Tyler was quick to let us know, "It's nice that we get to break it in the next group. We had a very cool show." Although when asked about tour, he is a little more hesitant. "Too hot! This is brutal for us Canadians." And then adds, "We're here to have fun and eventually branch out to Division II." Ten-year old Vanessa Eldridge picked up a trumpet for the first time two months ago when she joined the corps. At this age, the reason to join is both economical and sincere. "It was close and there are a lot of members my age." It was a huge step to get out there and perform first thing in the morning. Vanessa is honest when she tells us "It was hard to play 'cause I was worried and a little nervous." When asked, Victoria Ruske-Marois says she has been performing with Blue Saints for two days. But pretty little Victoria is only five. Behind her – the chief bottle washer is shaking her head laughing. Her mom got her involved and her cousin Shanna marches. She's having fun and wants to play horn when she gets older. Her favorite corps is Blue Stars and her favorite part of the show is "Beach Baby." On her tiny beach top are the words 'Beach Baby.' Her partner in crime is "surfer dude" Bailey Depatie, the five-year old nephew of Tyler. His "Uncle Ti-Ti" got him involved and he plans to play baritone too. He's been doing drum corps for two weeks. His favorite part? "Surfing!" The ray of sunshine that beautiful Denver morning was a corps from the north with little ones on hoola-hoop creating tic-tac-toe in the 'sand.'