Frank Van Voorhis and David Dummer founded the Blue Stars Drum and Bugle Corps in 1964, starting with only a color guard; no brass, no drums. Fast-forward through five decades of marching music excellence, and this season the corps is celebrating a rich history that's 50 years in the making. On Saturday, July 12, a collection of World, Open, and All-Age Class drum corps traveled to La Crosse, Wisconsin, for another stop on the 2014 DCI Summer Tour. But for the Blue Stars, this was more than just another stop. This was an opportunity to share something special with a home crowd full of family, friends and alumni. "It's really interesting to have that connection with the audience," said horn sergeant Lizze Miller, "When we hit the set in our show that makes a star, everyone in the stands knows what that means to us." "You know that when [the alumni] see that star, all the emotions from years past come back," added Blue Stars bass drummer Garrett Fuerst. 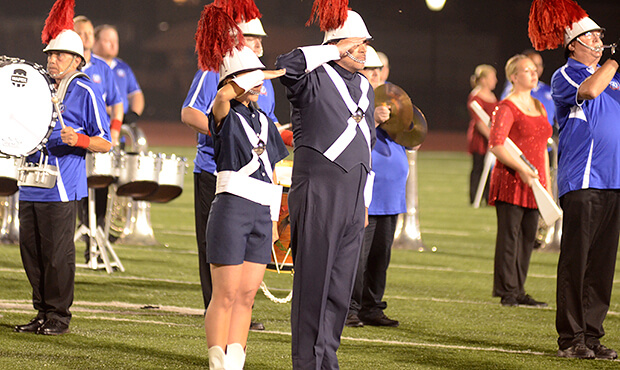 Members of the Blue Stars 50th Anniversary Alumni Corps represented all 50 years of the corps' history.
The home-show celebration was long anticipated by members and alumni alike, as the event not only featured the 2014 corps, it also featured a special historical video tribute and performance by the Blue Stars 50th Anniversary Alumni Corps. Blue Stars alum Steve Severance (1974-1981) took the lead on assembling the alumni corps, and with the help of social media, he was able to reach out and gather a strong group of performers representing all years of the corps' history. For months, the alumni group rehearsed a repertoire of music pulled from key moments over the corps' 50 years. "I would say that this corps has an extremely high level of family orientation, in the sense that when we get together, it's as if we haven't been apart," said Severance. "A lot of emotion, time and passion went into this. Bringing all these people back to perform in La Crosse has been fantastic." 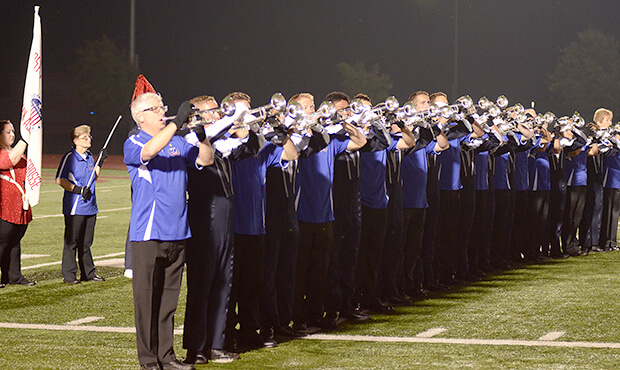 Members of the 2014 Blue Stars joined alumni members for a combined performance.
"This group is truly a family, and everybody looks out for each other," added 1978 alum Robbie Hochstetler. "I'm not only performing with the alumni corps, but I've been volunteering for a few weeks on the road with the current corps. This has been an amazing opportunity to give back to the organization which has given me so much." The Blue Stars' 2014 production, "Where the Heart Is" focuses on the idea of home, and that "home" can be anywhere as long as you are with the people you care about. For the alumni, La Crosse is home, and their hearts lie with the Blue Stars. "The motto of this drum corps is 'Finis Coronat Opus' which translates to 'the end crowns the work,' and it's all about perseverance," said Blue Stars drum major Jacob Carpenter. "That's what gets us from point A to point B, and that's what's gotten us from 1964 to 2014."