From a Blue Stars press release: Blue Stars is pleased to announce the return of Brent Montgomery as the percussion caption head for the 2007 season. Brent will be joined by Seth Adams who will arrange for the front ensemble. 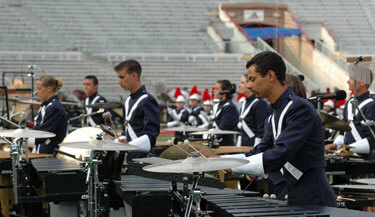 Blue Stars' front ensemble at the 2006 DCI World Championships in Madison, Wis.
Montgomery's drum corps career spans three decades. He served as caption head with Dutch Boy from 1988 to 1990. Adams will arrange the front ensemble music for the 2007 Blue Stars. He holds degrees in music education and percussion performance from the University of Massachusetts Amherst, where he also studied arranging and composition with DCI Hall of Fame inductee Thom Hannum and composer Carl Wiens. Read more on www.bluestars.org.