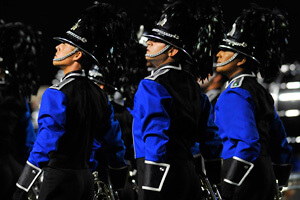 Bluecoats
In the Saturday Aug. 7 edition of the DCI Eastern Classic, the Bluecoats continued to re-invent their history, shattering their previous high score record. Achieving a solid second place spot in the overall rankings of the two-day Allentown, Pa. event, the corps is now a little more than one point behind the Blue Devils. "Everyone was really pumped about coming to Allentown," said Bluecoats veteran Christian Roman. "Everyone knows what this event is about and what this crowd is about, so I think it got everybody really revved up." Until tonight's 94.650 win, the Bluecoats' previous high score was 93.175, a number they reached in 2006 and again in 2008. That record was first broken Tuesday in Massillon, Ohio, and the gradual climb has continued all week. "Honestly, we're not really thinking about anyone else," Roman said. "We just want to beat our own personal high scores every night. It's a competition with ourselves. There are 100 points, and we're trying to get them all." Exactly one point behind the Bluecoats were the Cadets (2nd, 93.650), who debuted new color guard uniforms for "Toy Souldier." After a strong start early in the summer, the corps' scores seemed to plateau mid-season. But in August, the group has made significant improvements and now stands in fourth place overall. 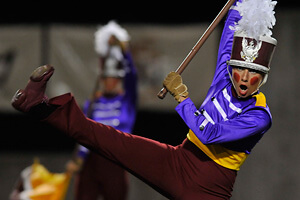 The Cadets
"We picked up a lot of momentum the last few days," said Cadets Drum Major Ben Pouncey. We're keeping our heads in the game and working as hard as possible. I think it's really starting to show up on the field." The Cadets had the opportunity to march in their hometown J. Birney Crum Stadium back in June, when they competed with the Cavaliers and Carolina Crown in the kickoff event of the 2010 DCI Tour. "I think the corps has really grown a lot [since June] and we've picked up a lot of confidence," Pouncey said. "The members had a different mindset, I think, going into tonight. It was really exciting to have that second showing here to bring what we have to the table." In third place Saturday was Phantom Regiment (91.300), earning its highest score so far this season. Its close competitor, Santa Clara Vanguard (4th, 90.900), also continues a slow but steady incline, ending up less than half a point behind the corps from Rockford, Ill. The Boston Crusaders (5th, 89.000) have improved by two full points since Wednesday in Erie, Pa. In a tight battle for sixth place, the Blue Knights (6th, 87.800) beat out the Madison Scouts (7th, 87.500) by only three-tenths of a point. The crowd was on its feet for much of the Scouts' performance, standing up from the moment the corps played its first chord of "Slaughter on 10th Avenue." 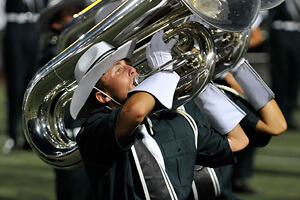 Madison Scouts
"No matter where we go in the country, we're always a crowd favorite," said snare drummer Nick Edwards. "People cheer for us as we're walking on the field, stand up when we're performing, and cheer as we walk out. I love that." The corps has established itself as a World Championship Finals night contender, currently sitting in 11th place in the World Class rankings. "As a Madison Scout, I'm not too worried about scores; it's about pleasing the crowd and making them stand up. That's what we love to do. But we're sitting in a good spot and we're just going to keep pushing." Breaking the difficult 80-point hurdle, the Crossmen (8th, 80.300) have persevered through a mid-season score plateau to stay in strong Semifinals contention (top 17). Saturday's number puts the Crossmen inches ahead of Spirit. Pacific Crest (9th, 79.400) has made a late-season surge that brings the corps less than one point behind the Crossmen. Third-year color guard member Annie Ochoa called this season one of the best she remembers in Pacific Crest history. "It's a really good step for our future and a big difference from last year," Ochoa said. "The success of the corps overall is because [we're rising] to what a lot of people feel we should be. We're finally reaching the crowds, able to show how much hard work we do." Another late-season riser is the Mandarins (10th, 77.500), improving by more than one point since Friday's show in Lawrence, Mass. On Saturday, the corps topped Teal Sound (11th, 76.750) for the first time this season in a head-to-head matchup. Jersey Surf rounded out Saturday's lineup in 12th place with a score of 75.850. View a complete recap of scores from this event. Contributing to this report: Sid & Linda Unser