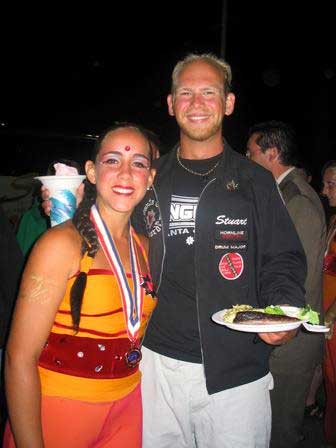 This one was submitted by Stuart fan/Kate parent Elsa Velez. "Santa Clara Vanguard drum major Stuart Shulman and guard vet Katrina Velez share a moment for a snack and photo op following a stellar performance at 2004 DCI Finals in Denver. The corps would depart later that night for Tour of Champions in California." Thanks Elsa!
E-mail your Forzato submissions -- and we will get to them all, in time (and we're posting them in the order they were received) -- to dave@dci.org along with where and when the photo was taken. Send some biographical information about yourself as well. We'll give you full credit. Also, let us know if you want your e-mail address included.