With the sweet smell of roses still fresh in the Pasadena air from one of the most successful World Championships ever staged, fans around the world have already started counting down the days until the start of the 2008 Drum Corps International World Championships as it moves into its new home in Indianapolis, Ind. The first in a decade-long series of World Championship events will take place in the spectacular new Lucas Oil Stadium in the Circle City from Aug. 5 - 9, 2008.

Be among the first to reserve your hotel rooms for this historic championship event!

Drum Corps International has reserved special blocks of rooms in many popular downtown Indianapolis hotel locations to put you right in the middle of all of the excitement and championship week festivities next August. Book now and lock in a great location and a great rate. 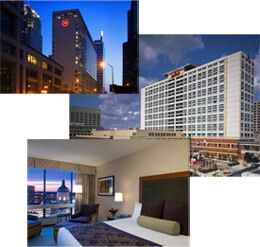 With a dense concentration of hotels right in the downtown area, fans will not only be within short walking distance of the brand new Lucas Oil Stadium, they will be able to feel the aura of championship excitement like never before! You'll be front and center, right in the heart of everything that the Circle City has to offer in great dining, entertainment, cultural activities, and more, all wrapped up in one convenient location.

Book your hotel rooms today with an easy to use online interface created especially for fans of Drum Corps International by the Indianapolis Convention and Visitors Association. There, you'll be able to search for available rooms, compare rates and amenities, and establish your "home base" for the 2008 DCI World Championships.

With the release of 2008 World Championship FANtastic 5 ticket packages on the near horizon as last stadium details are finalized, now is the time for you to start making your plans to be a part of the celebration of the world's most elite and exclusive marching music ensembles!

Learn more about the 2008 World Championships.