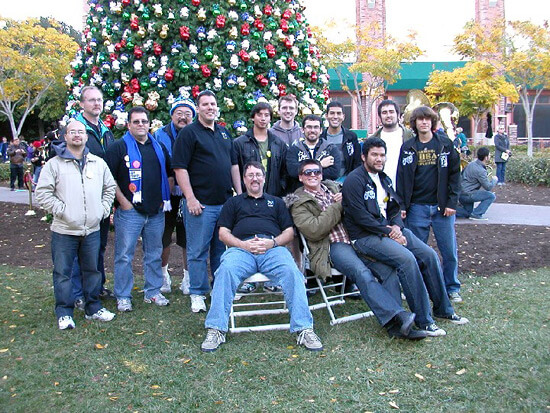 It was a cold and windy day on the frozen tundra that was Downtown Disney, but 13 Blue Devil past and present members braved the elements to play in the 2009 Tuba Christmas along with eight good friends and a future BD hopeful. It was a great time for old and new to get together, make music and spread Christmas cheer. Some had longer treks than others (Karl and his buddy Dan came from New Mexico) and Tim came home for winter break from Berklee Conservatory in Boston and Matt came from Camarillo.

We also had a little tailgate afterward in the parking lot (where else?) with hot dogs, chili and chips (the nacho cheese got burned and comments of it tasting like cigarette ashes were made. And I had not even fired up my cigar yet... I swear!)

I hope we can get even more to come join us next year. If not to play, then to come hang out and share stories of their experiences with drum corps.