From the Academy: This past weekend marked round one of two mini-camp auditions for the Academy in 2007. 277 young men and women came to try their best to earn a spot in the corps. 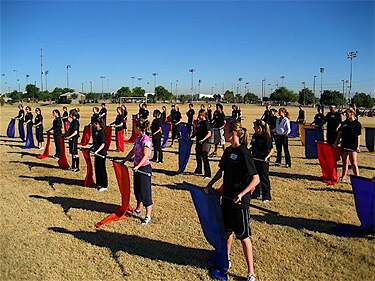 "This is by far the best turn out for auditions that we have ever seen here in Arizona," said Academy Director Mark Richardson. "The staff all agrees that we are seeing not only sustained or improved level of training from veteran members, but also an increase in talent from new prospective members." Of the 277 attendees, 90 are returning members from previous years. Also new to this year is the number of applicants from out of state. Two-hundred forty-seven of those auditioning hailed from Arizona and a surprising 18 commuted from Texas. Others states represented were California, Colorado, Illinois, Louisiana, Montana, Oklahoma and Wisconsin. Read more about this camp, and find information about upcoming audition opportunities on www.arizonaacademy.org. From Teal Sound: Teal Sound's first audition camp of the 2007 season had a record turnout in all sections of the corps. There was a high number of returning members and a lot of new faces that attended. A great experience was had by all throughout the weekend. There are still two more opportunities to audition with the corps this year. An audition day takes place this weekend, Dec. 9, at Santaluces High School in Lantana, Fla., and then again on Dec. 15-17, at the corps' first full rehearsal camp of the year in Jacksonville, Fla. Ron Ellis, brass caption head and interim program coordinator, said: "This is going to be a very exciting year for Teal Sound and many great things lay on the horizon for this corps!" "We are extremely pleased with the numbers that we had at the first audition and are looking forward to another very successful audition day this weekend in south Florida," said corps director Randy Blackburn. www.tealsound.org