Submitted by Youth Education in the Arts: The Cadets and Crossmen held three "Experience & Audition Camps" in November, attracting nearly 700 interested musicians and performers to the two corps sponsored by Youth Education in the Arts (YEA!). Two of those camps were held in exciting new regions—San Antonio and Atlanta—as the corps' staff members seek to widen the opportunity for talented participants across the country. The first, a combined audition camp held Nov. 17-19 in Carneys Point, N.J., drew 250 incredible people auditioning for both corps. The following weekend, Nov. 24-26, the Cadets held their first-ever camp in the suburbs of Atlanta, discovering some truly talented individuals who will return to the corps in December. The same weekend, the Crossmen held its first camp in their new home of San Antonio, Texas, with nearly 400 fabulous young performers auditioning for a place in the corps. 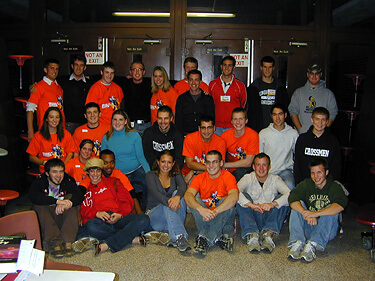 Cadets and Crossmen veteran memers assisted during the first of three Experience & Audition Camps held Nov. 17-19 in Carneys Point, N.J.
"We have had a great beginning to the season. The Cadets look good and the Crossmen response has been more than we ever expected," said George Hopkins, executive director of YEA! "That said, these next few weeks are going to be interesting camps. The door is open! The Cadets are looking for quality brass players, guard and bass drummers. The Crossmen are curious to see who comes out now that the corps is officially underway and flying high. We need to let the world know that auditions are open to one and all through December." Auditions will continue during December camps for both corps. Visit www.yea.org for more information.