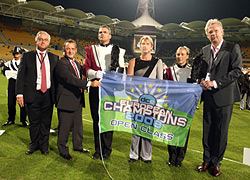 The Senators of Eastleigh, Hampshire, UK.
Thousands of international drum corps fans gathered on Saturday, Sept. 27 to witness the 2008 Drum Corps Europe (DCE) Championships in Kerkrade, the Netherlands. With 20 corps representing five countries vying for the top positions in two divisions, after a long day of competition, the Senators of Eastleigh, Hampshire, UK came away with the Open Class title, while Jong Jubal of Dordrecht, the Netherlands took top honors in the Cadet Class. This is a repeat championship win for the Senators who scored 90.20 out of 100 points on Saturday. In 2007 the group became the very first British corps ever to win the DCE Open Class title. Two Dutch corps followed the Senators in competitive placement, Beatrix of Hilversum (2nd, 88.30) and Jubal of Dordrecht (3rd, 86.95). Both Beatrix and Jubal have competed as part of the Drum Corps International Summer Tour in recent years, Beatrix this past summer and Jubal in 2006. View a photo gallery from the 2008 Drum Corps Europe Championships. View all results from the event at DrumCorpsEurope.org. Photos courtesy Drum Corps Europe provided by Drum Corps Media.