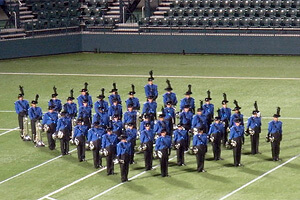 Reading Buccaneers
The Buccaneers Drum and Bugle Corps of Reading, Pa. took home the gold medal over Labor Day Weekend at the Drum Corps Associates (DCA) World Championships in Rochester, N.Y. Besting a field of 23 corps, Sunday's win for the all-age juggernaut marked the corps' sixth straight Championship title and its 10th overall, which sets a new record for DCA corps. A post on the corps' Facebook page said: "Congrats to the 2010 Reading Buccaneers for an INCREDIBLE performance Sunday in capturing number 10 in 2010. We're SO proud of you for your achievements! You upheld a 53-year tradition of excellence with dignity and class, and we love you!" Taking the silver medal for the second year in a row was Minnesota Brass. The St. Paul corps' score of 97.225 is the closest a second place corps has come to the Buccaneers at the DCA Finals since their 2006 World Championship win. Coming in third place for the fourth time in the last five years were the Empire Statesmen of Rochester with a score of 96.700. In the Class A Finals competition, the Northern New Jersey Fusion Core put up the top score to earn the corps its first Championship ever. Fusion's 84.463 topped a field of three other corps that included Grenadiers (2nd, 84.463), Carolina Gold (3rd, 82.738) and Govenaires (4th, 81.013). View all 2010 DCA World Championship scores and more. Photo courtesy ReadingBuccaneers.org