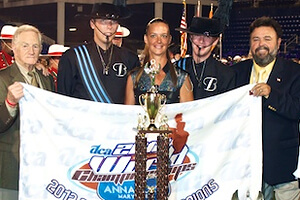 The Reading Buccaneers are presented with
the 2012 DCA Championship trophy.
After their six-year winning streak was snapped in 2011, the Reading Buccaneers are right back to their winning ways, capturing the gold medal at the 2012 Drum Corps Associates (DCA) World Championship in Annapolis, Md. over Labor Day Weekend. The Reading, Pennsylvania-based Buccaneers led the field all weekend, scoring more than two and a half points above the nearest competitors during the Prelims. The corps captured the top prize on Sunday, Sept. 2 with a 99.03, a record high score for DCA's Championship, which has been in existence since 1965. "It was kind of sweet to take the Championship back to Reading where it belongs," Buccaneers Public Relations Manager Thomas Moore said. "But even more impressive than reclaiming the title was the way the men and women performed to close out the 2012 season undefeated." The Buccaneers have long been a juggernaut on the all-age drum and bugle corps circuit, winning a record 11 DCA Championships including seven of the last eight years. After disrupting the Buccaneers' winning streak in 2011, St Paul's Minnesota Brass took second place on Sunday with a score of 96.23. The Hawthorne Caballeros (94.78) and Connecticut Hurricanes (93.08) rounded out the top spots. Newcomers Cadets2, a program of Drum Corps International's World Class Cadets, took fifth place with a score of 91.88. In Class A competition, members of Carolina Gold took their first World Championship trophy home to Greensboro, N.C., edging last year's Champion Govenaires 82.60 to 80.93. Windsor Regiment (78.78) and White Sabers (77.03) represented the other two Class A Finalists. Read more about the 2012 DCA Championship results. View all scores from the DCA Championships. Photo courtesy DCAcorps.org.