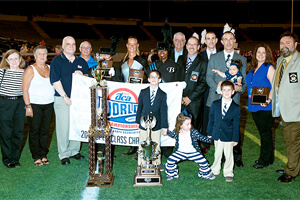 Reading Buccaneers
The all-age drum and bugle corps activity wrapped up its 2013 season over Labor Day Weekend with several exciting days of events and competition at the Drum Corps Associates (DCA) World Championships in Annapolis, Md. At Navy-Marine Corps Memorial Stadium, the Reading (Pa.) Buccaneers outscored the competition at the Prelims on Saturday, Aug. 31 as well as the Finals on Sunday, Sept. 1, taking home the DCA championship trophy in the corps' second straight and 12th title win since 1965. The Buccaneers scored 98.43 out of 100 points, taking top honors in the total visual ensemble, music and general effect captions, good enough to deliver the corps its eighth championship title over the last decade. "All of the corps came into this weekend and provided the audience with shows that were their best of the season," the Buccaneers posted on their website following their win. "Some of the corps surprised many because of the amazing level of improvement that they showed; not only from one year to the next but from the beginning of this season to the end." One of those corps showing great improvement throughout the weekend was the Caballeros of Hawthorne, N.J. After finishing third overall during Saturday's Prelims, the corps made up more than half a point to finish in second place ahead of Minnesota Brass 96.98 to 96.65. The Caballeros took top honors in color guard Sunday night, and after a third place finish in 2012, this year's finish is the corps' best since the 2007 DCA Championship Finals in Rochester, N.Y. Though finishing in third after winning the DCA Championship in 2011 and placing second in 2012, Minnesota Brass showed very strong marks from its front ensemble and percussion, winning the percussion caption Sunday night. 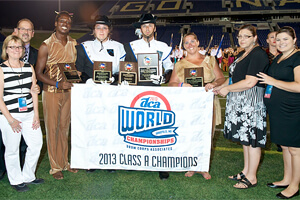 White Sabers
"Very proud of how far this corps has come," Minnesota Brass Executive Director Eric Molho posted on Facebook. Rounding out the Open Class finalists were the Empire Statesmen, Cadets 2, Atlanta CV, Fusion Core, Bushwackers, Hurricanes and Carolina Gold. In Class A competition, the White Sabers won their very first DCA championship title with a score of 85.93. The corps from Dansville, N.Y. that has been competing in DCA competition since 2005, was able to outscore the Govenaires, Sun Devils and Windsor Regiment in the Class A Finals. The corps earned top honors in the visual, percussion, color guard, brass and music effect captions. View all scores from the DCA Class A Finals. After two years away in Annapolis, the DCA World Championships will make a return to Rochester, N.Y. over Labor Day Weekend in 2014. Tickets for those events will go on sale online in the near future via DCAcorps.org.