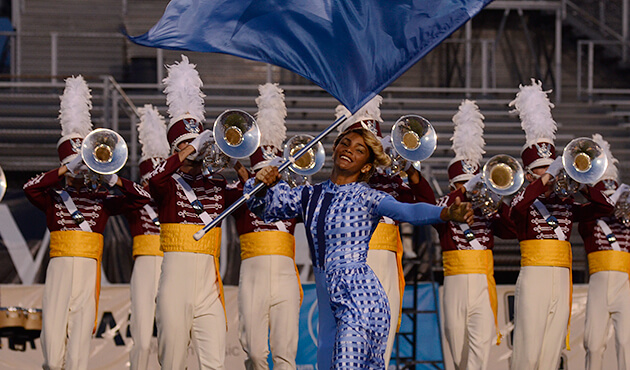 The Cadets
On Wednesday, June 18, five of Drum Corps International's World Class corps came together in Indianapolis for Opening Night '14 presented by DeMoulin Bros. and Co. It had been a year since audience members saw these corps perform, and after months of rehearsal camps and weeks of spring training, it was time for them to share the results of their hard work. As the corps buses rolled into the parking lot of Ben Davis High School, grey clouds rolled in right along with them. Rain showers and an occasional flash of lightning were enough to delay the start. By 7:30 p.m., the rough weather had passed, corps began warming up, and eager fans lined up at the stadium gates to enter the stadium. The Cadets kicked off their season with a first-place finish with a score of 72.10, sweeping the captions and bumping last year's defending World Champion, Carolina Crown, into second place. Their program, "Promise: An American Portrait," connects with the audience emotionally, joining them in hope for the future of America. "This show is very different from last year," explained Cadets Drum Major Kendal Stevenson. "Last year's show was very in your face and full of power and drama, but this show is more sensitive and connects people on a different level. That's what I'm most excited to see from the corps this year." 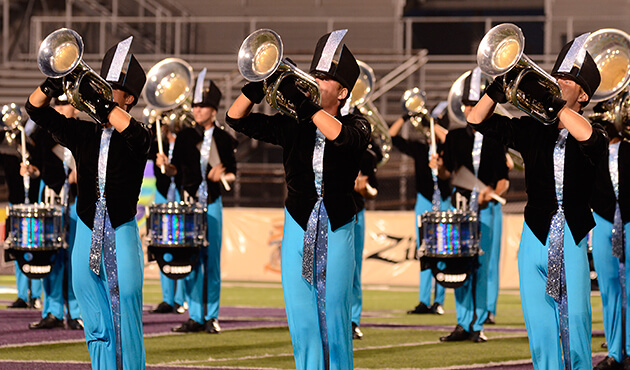 Carolina Crown
Carolina Crown members earned a second-place (70.80) finish with their show "Out Of This World." With four trampolines and a percussion feature played on car mufflers, the corps worked to give the crowd its money's worth. Phantom Regiment placed third (68.30) with its show "Swan Lake," a wild, dark portrayal of the classic Tchaikovsky ballet. Drum Major David Warren was happy to see his corps perform well and maintain a high level of passion. "We had a ton of great energy. The corps has been working really hard to connect with the audience early on, forming that emotional relationship with them. I definitely think we did that here tonight." The Cavaliers performed their sinister program, "Immortal," earning them fourth place (67.30). A high point on the score sheets for the Green Machine was third in percussion, outscoring Phantom Regiment by half a point. 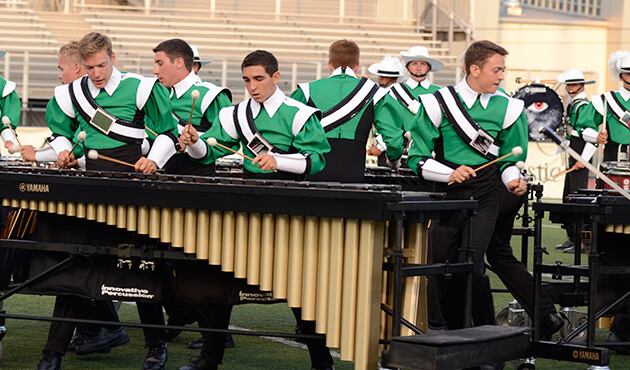 The Cavaliers
The Troopers from Casper, Wyoming had the honor of presenting the first notes of the summer as they opened the show in Indianapolis. Drum Major Justin Anderson led his corps as they performed their show "A People's House," earning fifth place with a score 61.70. "It feels great to be part of the first show of the season. We've been hyping it for the entire spring training," said Anderson. "It's a true honor to be the first drum corps to perform this season, and it's an amazing opportunity for us to set the bar and see where we go from here." Now that the 2014 DCI Tour has officially begun, these five corps are off to the next show. You can catch the Phantom Regiment, Carolina Crown,Cavaliers and Troopers at the "Show of Shows" in Rockford, Illinois on Friday, June 20. The Cadets will then catch up with them in Akron, Ohio at "Innovation in Brass" on Saturday, June 21.