"California, Here We Come" was the battle cry for Midwest powerhouse Phantom Regiment this week, as the Rockford/Loves Park, Ill.-based corps made its first trip to the West Coast in more than two decades. 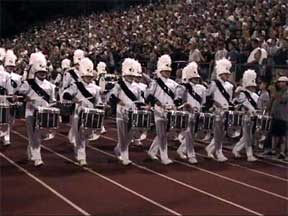 Phantom Regiment parades past the audience at the Pacific Procession.
"The trip has been excellent so far, with no real challenges on our itinerary, rehearsal schedule or rest periods," said corps director Pat Seidling. "When I was at Madison, I learned how to plan and manage a trip out West, and it's been invaluable for the Regiment this summer. What has also made it special is the hospitality shown to us by the Vanguard and Blue Devils and by the West Coast fans. It's been a first-class experience and we are definitely looking forward to a return trip to California." Phantom Regiment's West Coast tour kicked off with two shows in Northern California as part of the Weekend of Champions series. The tour continues into Central and Southern California with stops in Modesto, Riverside and Glendora, before starting their return to the central U.S. with stops in Phoenix, Ogden, Utah, Greeley, Colo., and Denver for "Drums Along the Rockies" on July 12. Corps members made their first California performance on Saturday evening a special one by taking home the silver medal at Pacific Procession in Hayward. Following their performance, Seidling described the performance as good, but that it still has a long way to go. "While we may have beaten the Vanguard tonight and been closer to the Blue Devils than in recent years, neither corps is going to roll over. They're both exceptional competitors with great programs, and for us to continue to compete we need to be at the top of our game, it's a challenge that the Regiment members and staff are up for and we can't wait to take them on as the season progresses."