Drum corps has virtually overtaken Madison this week as Wisconsin's capital city plays host to Drum Corps International's World Championships presented by A.J. Wright. DCI has a long history with Madison and the University of Wisconsin; 2006 is the seventh time the city has hosted the World Championships. Since 2002, the last time DCI was in Madison, the University of Wisconsin's Camp Randall Stadium – venue for Championships Week – has undergone a $112 million renovation. In addition to improved lighting and a new field surface, amenities such as more bathrooms and added concessions stands should improve fans' experience, hopes Todd Nelson, Director of Events for the UW Athletics Department.   "Those are features that will hopefully ease congestion and get fans back in the stands," he says. "So maybe you won't end up missing a corps while you're waiting in line." 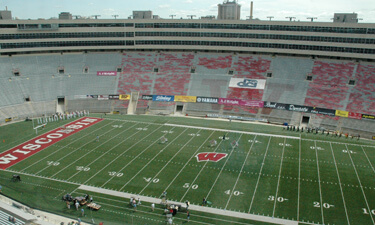 Camp Randall Stadium
Nelson has spent all year preparing for this event. "We spent a lot of time talking to DCI's event staff so that we're prepared to meet the corps' needs, so that they can perform at their highest level," he says. "In a way, this event is similar to the other events we host, in regards to the behind-the scenes preparations. We try to keep the same people doing the same jobs so that they're comfortable with what they're doing. But at the same time, it's a unique event, because there's nothing else like it." DCI's history with Camp Randall helped the staff prepare. Nelson was not director of events in 2002, but he did work at those Championships, which made this year's event easier to put together. "We keep an event profile on every event," he says. "We took a lot of pictures in 2002. That really helped me, because looking through the pictures, I could see exactly where banners hung, where people warmed up, those kind of things." The fans' unfamiliarity with the venue is the staff's biggest challenge, Nelson says. "With a football game, we get a lot of season ticket holders, people who already know what's where and where they're going," he explains. "But when you've got people coming in from literally all over the world, it's a little different." The stadium staff is working very hard to have plenty of guest relations personnel and ushers available to help fans orient themselves. "We want people to have as good an experience as possible," he says. Nelson says he has always heard positive feedback about DCI's shows in Madison. "We don't think of this as an athletic department event – we think of it as a community-wide event," he says. "There's a huge economic impact for the city, but it also gives fans a chance to see the city, to see what it's like to live in Madison, to see the great assets we have here like the Overture Center [where the Individual & Ensemble competition was held on Wednesday], which is a world-class facility. We've worked very hard to keep the campus community, the business community, and the neighborhoods surrounding the stadium informed and involved. A lot of people have worked very hard to make this truly a city-wide event and to make it very successful," he says.