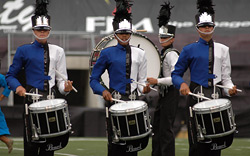 The 2006 Capital Regiment.
Following the completion of an extensive evaluation of organizational stability and strength of program by members of the Drum Corps International Participation Review Committee, Capital Regiment of Columbus, Ohio, was approved to compete as part of the 2009 DCI Tour as an Open Class corps. Founded in 1992, Capital Regiment first stretched its marching music legs in 1997 as an indoor percussion ensemble. In 1998 the program expanded as an Open Class drum corps, finishing ninth at the 1999 DCI Division III World Championship. Becoming a World Class corps in 2003, Capital Regiment last fielded a drum corps in 2006. "We used the time we were inactive during the 2007 and 2008 seasons to take care of some of the debt we've accumulated as well as to fix some weaknesses in our organizational structure," said Capital Regiment founder and director Rick Bays. "We've reevaluated how we currently do business and how we've done business in the past, while getting more involvement from our board of directors. We're also in the process of expanding the board and increasing its diversity." While preparing for a comeback after two years away from the competitive field, the drum corps has seen a complete turnover in its membership and staff. Bays says that only one of a total of 104 members expected to join the corps in 2009 has previously participated as a member of the Capital Regiment. A 28-person instructional staff roster is completely new. "The really nice thing is that just about every single one of our new staff members are teachers or in the education field," says Bays. "They're here because they want to work with the members and give them the best possible learning experiences that they can help provide." While Bays says that he would like to see the corps return to World Class competition in the future, even as soon as 2010, right now the organization is focused on incremental growth. "We need to go through this season making sure that everything is working correctly and making sure that we're even ready to submit an application to join the World Class," he said. "Importantly right now, our students have an enormous amount of excitement. They're really, really looking forward to living the drum corps experience, and they're just excited to be a part of the 2009 return of the Capital Regiment."