From a Capital Regiment press release:

The Capital Regiment held its second camp of the season Dec. 11-12 at Walnut Ridge High School in Columbus, Ohio. Many who have been associated with the corps in previous years believe it was the best early season camp in the corps' history.

"Attendance was the highest ever for a post-November camp," reported Capital Regiment assistant director Bryan Tracht. "Having 79 brass players, 34 guard and 60 percussionists in house created much energy and excitement."

"While the numbers were impressive, the talent and the drive and desire of those in attendance is what really impressed us," Tracht continued. "Capital Regiment has always had excellent members but what we are noticing this year is a strong sense among those in attendance of what it is going to take to go to the next level."

Gifford Howarth, marimbist and clinician, worked with the Capital Regiment's pit all weekend and also conducted a clinic for all percussionists in attendance Saturday afternoon. "I was a little familiar with the corps before I came in this weekend, due to the fact I have known some of the staff for a while and I have seen the corps perform over the past two or three years. It seems to me the talent level has increased this year and things look very promising for the corps. I look forward to working with the corps down the road and seeing them this summer," Howarth said. 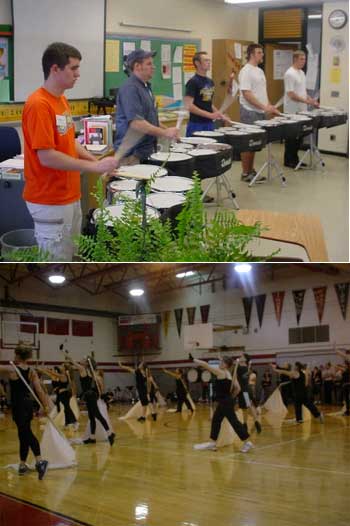 "I was very impressed with the number of college music majors who were trying to earn a spot in the corps," added Howarth. "Out of the 60 or 70 percussion kids I talked to at my clinic session, I would say 30 to 35 were music majors."

The camp ended with each section showcasing their weekend accomplishments. "Wow!" was a frequent descriptor uttered by those in attendance.

Tracht reported that while most positions in the corps have been offered or will be offered to those who have attended the November and December audition camps, a few membership opportunities remain. "There are a limited number of openings in the horn line, pit and guard. Anyone interested in auditioning for one of the remaining positions should submit an online application on our website."