In April of 1995, Capital Sound was formed through a merger of the Madison Jr. Scouts and the all-female Capitolaires. I saw the corps perform in Oswego, Ill. that summer, less than two months after their merger.

In December of 2003, only five days after the corps' annual banquet in Madison, Wis., the corps was dissolved.

Nearly 1,000 members, staff, support staff and administrators were part of a drum corps that has lived only nine years, but has became nearly legendary. Even from its beginning, Capital Sound was known for doing amazing things, and quickly found its way into the hearts of fans across the nation. In 1995, they found their way into the heart of a 9-year-old drum corps baby from Romeoville, Ill. They deserve to have their story told. 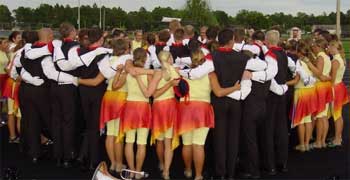 Capital Sound
From day one, Capital Sound was established as a family organization, and was born through the love of drum corps of its founders, a collection of former marching members, drum corps fans, and the directors of the two corps. They hoped to create a drum corps that was more accessible to the common youth that maybe could not afford a full touring drum corps, wished to maintain other options for a summer, or to youth who were looking for a different drum corps experience. Capital Sound was so unique, and was able to quickly establish itself due to that. The members and staff of the corps have always been described as some of the most passionate and dedicated in the activity.

I loved those people, and we all loved each other. There are always difficult situations, but we always overcame them. We were a drum corps that was born out of love, strife and dedication, and we carried that with us every step of the way. I cried, a few times, and ask anyone who had to listen to me tell them about this, it is sad to watch a 6' 2" snare drummer break down. Some memories of one of the shortest-lived legends of the summer months:

"I remember being 15 and competing against Capital Sound. Even though we had a more successful season score-wise than they did, everybody was always very nice. That's not my actual memory though -- I'm not sure what made this come to mind when Andy was asking for memories. I remember the following season, 1998, when I was 16. It was Capital Sound's turn to have the higher scores for the season, and they were champions at DCM that year. I remember being lined up next to them somewhere and wanting to get myself worked up. I just couldn't. Capital Sound always conducted themselves with a high level of class, and I admired that. When they won DCM and we obviously didn't, somebody from their corps said we had put on an excellent show from what they had heard, and called me their sister." -- Emily Otto, Americanos 1997, 1998, Capital Sound 2003

"I would have to say that my favorite memory about marching with Capital Sound occurred before every show as we marched in pairs toward the stadium. I don't know why I loved this so much. Maybe it was because when the entire horn line had their eyes burning a hole in the head of the person in front of them, we were a united force. I can still hear all of the corps clapping for us (especially the Blue Stars, they were the most supportive) as we passed them by." -- David Leckman, 1999-2002, staff 2003 We were blessed to get to be a part of something so special, so unique. Fans, alumni, members and staff: Never forget how you got to be a part of something truly special, unique and incredible, and always save a place for Capital Sound 10 years, 20 years or 50 years from now.
May our sound always be heard.

I'd love to start getting emails again -- dittrich@uiuc.edu Editor's note: The MDBCA did announce that Cap Sound is on a one-year hiatus. The MDBCA also announced that they are formatting a six-person advisory committee to help relaunch Capital Sound in the future.