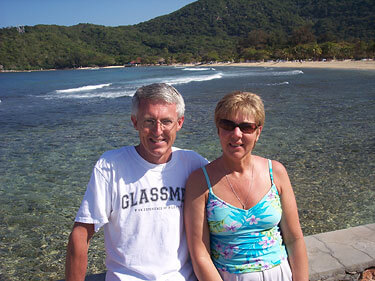 Those accustomed to the often hectic schedule of being involved in the drum and bugle corps activity, know that vacations come at a premium. There really isn't any down time. Planning for the next season starts right after Drum Corps International World Championships in August. Auditions across the country start in November with monthly rehearsals continuing until the season starts in June. Most Tour Event Partners (those who help coordinate the more than 135 events on Drum Corps International's Summer Music Games Tour) are planning and promoting their drum and bugle corps shows this time of year.

My wife Sara and I, contest directors of the "Summer Music Games in Cincinnati" got away from weeks of near zero degree temperatures in Fairfield, Ohio, for an 11-day Caribbean cruise in February. We visited Haiti, Aruba, Curacao, Panama and Costa Rica.

We got involved with the drum corps activity in 1996 while our son Adam was a freshman at Fairfield High School. Dave Burchfield, director at the time asked if I wanted to be the contest director of our drum corps show. Being more than just a bit naive, I agreed.

I learned a lot by getting behind-the-scenes tours of many drum corps shows in our area. It wasn't until I attended my first "show promoters college" in San Antonio, Texas that I realized I had struck gold. I was like a sponge soaking up all the knowledge from experienced Drum Corps International Tour Event Partners from across the country. People like Doug Madar (Charlotte, N.C.), Claudette Wire (Rome, N.Y.) and Kathy White (Houston, Texas) took me under their wing and helped me a great deal.

I tell Tour Event Partners today that they can shave at least five years off of their learning curve by attending the annual Tour Event Partner workshops put on by DCI. My wife and I continue to support the Fairfield High School Marching Band although our daughter, Heidi graduated four years ago. Our family is looking forward to attending the Drum Corps International World Championships in Pasadena, Calif. in August. We'll see you there!