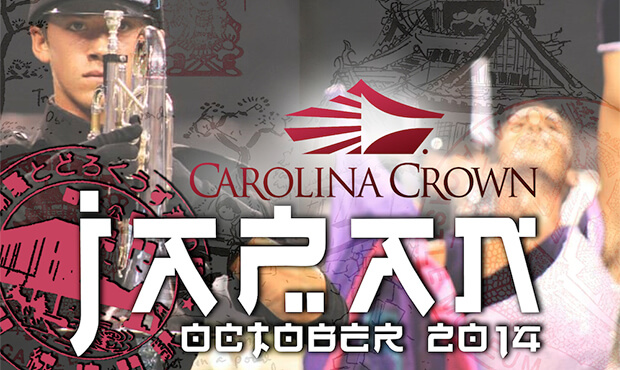 Seventy-five members of the Carolina Crown organization will fly into Tokyo next week.
Carolina Crown members will embark on a trip to Japan next week marking the 25-year-old corps' first-ever trip overseas. A group of 75 of the organization's 2014 corps members and staff will fly out of Atlanta on Wednesday, Oct. 8, headed to Tokyo for the start of a week-long series of performances that will take them to three different Japanese cities and thousands of miles from home. When the ensemble plays its first notes in the Land of the Rising Sun, it'll be the culmination of planning that's been years in the making.

Carolina Crown Executive Director Jim Coates says that the idea for this trip to Japan is one that's been in the works since all the way back in December of 2012. That's when the corps started discussions with its corporate partner Yamaha about working on additional performance opportunities for the corps outside of the summertime Drum Corps International Tour. Once this particular opportunity presented itself and Carolina Crown management decided it was feasible to make the trip, they began planning the logistics and working through a myriad of details and preparations. "Final logistical planning has been in the works for the last nine months, first making sure we have the commitment from the members and staff, verification of passports, travel arrangements, rehearsal facilities and transportation prior to leaving, arrangement for instruments and equipment needed both here at home and overseas," Coates said. Yamaha has made much of the trip possible. The company will loan the drum corps brass and front ensemble percussion instruments to use when it get overseas, and the group will transport its own drums, color guard equipment (flags and rifles) and uniforms from the States. But having the equipment and instruments in place won't do any good without the personnel to play them, and Coates says that the commitment from corps members to get out of school for 10 days in the middle of the semester has provided its own set of challenges to work through. Students taking part in the trip have had to clear absences with their universities and had to make their own travel arrangements to get to South Carolina for rehearsals.

Less than half of the corps' 150 members in the summer will make the trip. They will gather in the corps' hometown of Fort Mill, South Carolina, on Sunday, Oct. 5, for two and a half days of rehearsal before flying out later in the week. In that small window of time the group will put together a version of its 2014 production "Out Of This World" scaled down to about 70 drill sets and to fit the smaller ensemble's instrumentation which will be made up of 32 brass, 16 percussion, 16 color guard and a drum major. With schools in session in the Carolinas, the performers will stay in a hotel with the corps transporting them to and from rehearsal each day in Fort Mill.

After their mini rehearsal camp prior to embarking for Japan, Carolina Crown members will take a short flight from Charlotte to Atlanta before settling in for a 14-hour haul to Tokyo on Wednesday, Oct. 8. Upon arriving, the corps will be bused approximately two hours northwest to Takasaki City where they'll take part in the Takasaki Marching Festival. After a day of sightseeing and rehearsal, the corps will present a number of educational clinics and a performance with local students. The main event is on Sunday where Crown members will participate in a parade and perform their show in an outdoor venue. One of the unique parts of the Takasaki leg of the trip will be the opportunity for corps members to stay in the homes of host families to give them a totally different experience than simply staying at hotel. "Just a few of the corps members have traveled to Japan before," says Coates who noted that corps members will have meetings prior to the trip to get a basic overview of Japanese customs and culture. On Monday, Oct. 13, the group will be back on the road headed to the city of Chiba, which is about 25 miles southeast of the center of Tokyo. A popular location on Tokyo Bay for conventions like the Tokyo Auto Show, here they'll spend the day performing as part of the Makuhari Marching Festival. Corps members will have the opportunity for a final day of sightseeing in Tokyo on Tuesday before they're back in the air headed to the United States on Wednesday.

Ambassadors at Home and Abroad

Carolina Crown's trip to Japan will be another in a recent string of high profile opportunities for the corps to expand its reach and serve as ambassadors of Drum Corps International. Just last year the organization was invited to perform as part of the nationally televised Disney Parks Christmas Day Parade in Orlando. "We see these type of performances and opportunities as additional ways to develop lifelong excellence and to offer our performers a unique experience not typical to our main purpose of being a drum corps," Coates said. "We've been honored to receive numerous invitations to showcase our talents over the last few years." View a detailed itinerary for Carolina Crown's trip to Japan. 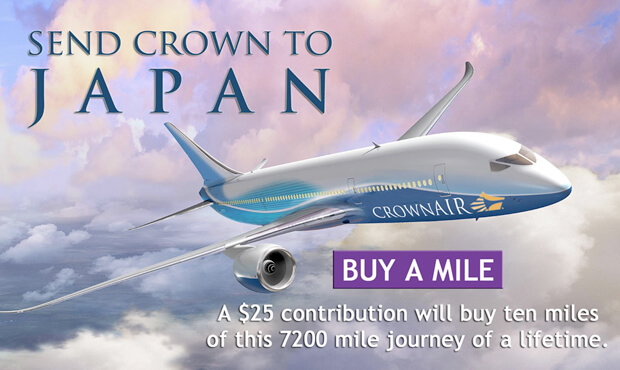 While a portion of the expenses for this trip will be covered by Yamaha and other sponsors, Carolina Crown is raising funds to help offset the cost of the trip for its students. Learn more about the organization's CrownMILES fundraiser.