The rare appearance of the Chicago Bears in the NFL playoffs is giving the Cavaliers and DCI some television exposure. 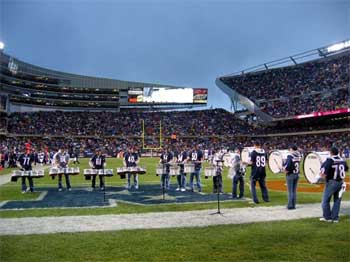 The Chicago Bears drum line, presented by the Cavaliers, at Soldier Field in Chicago recently.
Members of the Chicago Bears Drum Line, presented by the Cavaliers (an ensemble made up of current members and alums), who perform at every Bears home game, will be on ESPN Sunday morning from 10 to 11 a.m. Central time for ESPN's NFL GameDay, which will be broadcasting live from Chicago's Casey Moran's bar (3660 N. Clark St). Cavaliers director Jeff Fiedler thinks that ESPN will feature the ensemble during breaks before commercials. Tomorrow morning from 5 to 7 Central time, meanwhile, the ensemble will appear on the local WBBM TV (Chicago's CBS channel 2) for the CBS 2 Morning News, which will be broadcasting segments from Soldier Field, home of the Bears. Cavaliers director Jeff Fiedler thinks the drum line will be interviewed for some portions, and will play into commercials throughout the broadcast.