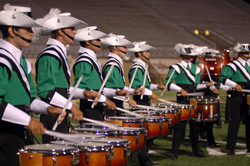 The Cavaliers
Perfect weather for the Independence Day weekend welcomed 12 World and Open Class drum corps Saturday, July 5 to Kalamazoo, Mich., on the campus of Western Michigan University. Kicking off the annual event, Kalamazoo-based Legends took the field in its first competitive performance as an Open Class unit, while the evening ended with the Cavaliers continuing their undefeated streak with a formidable win over the Bluecoats. For the first time this season, eight judges roamed the field and occupied the press box marking the return of a full judging panel. As a cost saving measure, Drum Corps International had reduced judging panels to five for the first two weeks of the season. In World Class competition, the Cavaliers (1st, 83.150) remained indomitable and intimidating, the pounding furor of taiko drums during their "Samurai" show and breakneck visuals leading them to first place finishes in every caption and sub-caption. The silver medalist Bluecoats (2nd, 79.800) attempted to deal a knockout blow to the Green Machine, but the gap between the two corps remained. On top of a pack of corps scoring in a narrow cluster were the Glassmen (3rd, 75.800). Glassmen drum major Michael McGreevy was excited with his corps' bronze medal this evening, but expressed even greater optimism about what is yet to come in the Glassmen's production, "Kar-ne-vel." 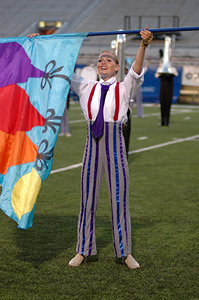 Glassmen
"This is a show of layers with new stuff every day," said McGreevy. "It's definitely still a work in progress, but this is already my favorite show that I've done in my four years of doing this. I can't wait to see what the next level is." McGreevy gave specific credit to some of the performers for helping to sell the show this evening. "I think a lot of the performance comes from the color guard," he said. "They've spent time with the designers learning what roles they're playing, whether it's tumblers or entertainers or animal tamers." The end result, explained McGreevy, is a journey through a carnival's atmosphere, from entertainment to love and joy, to ferocity and excitement and then back to pure entertainment again. The Colts (75.100) placed in fourth, while the Blue Stars (5th, 74.950) continue to tell the story of the Tour de France with their show, remaining firmly in contention for spots with the Colts and Glassmen. Following was Spirit (6th, 72.800), the Madison Scouts (7th, 72.050) and the Troopers (8th, 70.800). The Scouts opened a small lead over the Troopers in Kalamazoo after the two corps traded placements in the previous week. In the Open Class, Revolution dominated the judges' sheets, taking the gold medal in its division with a score of 69.050. They were passed only in the color guard caption by Ontario's Dutch Boy (2nd, 63.900). The Colt Cadets (3rd, 59.550) placed ahead of the hometown Legends (4th, 55.050). On Monday, eight corps will meet in Louisville, Ky. for the DCI Louisville Premier Event, and fans won't want to miss the regional action next weekend in Orlando, Fla. and Denver, Colo. Drums Along the Rockies in Denver also will be available in a live, multi-camera Webcast over the DCI Fan Network.