From a Cavaliers press release: After 17 years as corps director and 35 consecutive years with the Cavaliers, Jeff Fiedler has announced his retirement from his position prior to the start of the 2008 season. Fiedler, 48, is a past chairman of the Drum Corps International board of directors and has been serving as DCI's interim chairman since last fall. Under Fiedler's tenure as director, the Cavaliers have captured all seven of their Drum Corps International World Championship titles, as well as two silver medals and three bronze. Fiedler was named to the DCI Hall of Fame in 2005. 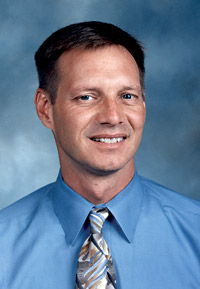 Jeff Fiedler
"I have seriously considered retiring from the drum corps twice in the past five years and have delayed acting on this specific decision since the end of the 2007 season to make sure the corps is set up for success on its way into 2008," said Fiedler. "I believe this is the opportune time to make the switch to a new director with new ideas and a new vision while the corps is competitively strong, the membership highly experienced and the design team, instructional staff, board membership and volunteer base motivated and energized at their highest level in our 60-year history. I'm now looking forward to being able to spend more time with my family and exploring new avenues in my professional career." Fiedler joined the Cavaliers as a color guard member of the cadet corps in 1973 - the organization's 25th anniversary. In 1975, he became a member of the Cavaliers' baritone section before he took on drum major responsibilities for the 1979 and 1980 seasons. He also joined the instructional staff of the Cavaliers Winter Guard in 1979 while still marching in the corps. Fiedler became a member of the corps' summer visual instructional staff in 1981 and was named staff coordinator in 1982, making him an assistant to director Adolph De Grauwe. When De Grauwe retired at the end of the 1990 season, Fiedler was named corps director. "After some difficult, yet thoughtful discussions about this transition over many months with Jeff in addition to Don Warren (Cavaliers founder and president) and Don Heitzman (corps treasurer and board member), we of course are extremely sad to see him go," said Adolph De Grauwe, former Cavaliers director and current board member. "The legacy of excellence Jeff leaves and that he has infused in this organization over the past 35 years puts us in an incredible position for the future." On Sunday, the Cavaliers Board of Directors confirmed the selection of Bruno Zuccala as the corps' new director, a position he will step into immediately. Zuccala has served as the corps' assistant director, color guard caption head and staff coordinator. He has been with the Cavaliers since joining the instructional staff in 1985. "As my close friend and assistant director for the past 12 years, Bruno will have my complete and immediate support for as long as necessary while he makes the transition into his new role as corps director," said Fiedler. Currently Zuccala is an administrator for the Seneca Valley School District in Zelienople, Pa., a position that he'll continue to hold in addition to his directorship with the Cavaliers. He is a graduate of Slippery Rock University (Pa.) with a degree in elementary education, and holds master's degrees as a reading specialist, in administration and in supervision. He has been active in the drum corps activity for more than 40 years. "Having worked with Jeff for so many years, I've learned from the best, and now I have the privilege to lead the corps into the future. It's a tremendous honor," Zuccala said. "It is important for the Cavaliers to have a leader like Bruno who continues to have the drive and who is ready to give his best every day of the year, encouraging those around him to push the organization ahead in all ways," Fiedler said. "His mindset is parallel to my belief that status quo is moving backward. This has been somewhat of my mantra for the many years I've been a corps member, instructor and director. Quite frankly, after 35 years, I'm looking forward to spending a summer other than on a gym floor!" Fiedler said his biggest regret will be leaving before the organization's 60th anniversary season, but says that the corps is set for 2008 with initial auditions completed, the direction and creation of the summer program moving along rapidly, and the design team and instructional staff in place for another tremendous summer effort. "I have promised Bruno, Don and Adolph, as well as the Cavaliers' board of directors that I will always be available for advice and counsel on any issue," said Fiedler. "We've been working through this transition for some time now, and I look forward to seeing the Cavaliers remain strong in the future. I encourage everyone affiliated with the organization to step up their support of the corps during our 60th anniversary as this will be a once-in-a-lifetime summer. I have enjoyed all of my 35 years with the Cavaliers and will continue to cherish the thousands of friendships I've made and take pride in all of our accomplishments." Cavaliers.org