"Spin Cycle," the world champion Cavaliers' 2003 program, was unveiled to the public last Friday night in Oswego, Ill. (a contest which the Cavaliers won with a 74.60). Before and after this performance, some members of the Cavaliers' leadership team sat down to discuss the program and the 2003 Cavaliers in general. 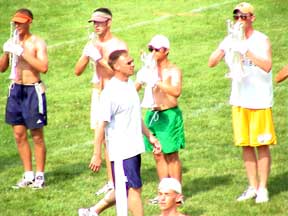 Director Jeff Fiedler (third from left) monitors a rehearsal last Friday in Oswego, Ill.
Chris Weber, 2003 drum major (and brother of Pete Weber, the Cavaliers' drum major in 1997 and 1998), said the corps is anxious to get out on the field with their show, after an intense three-week pre-tour. "I'm really excited. It will be my first time out there. I'm looking forward to finally be able to perform after three weeks of pre-tour. I think most of the guys are really excited to get out on the field and put the show out there for the people to see! The show is really exciting, really fast, action packed; you have to see it to believe it I think. We are definitely ready for this show, we have been working hard in the practices, and I think we are ready to put it out there." Jeff Fiedler, director of the Cavaliers, said that this year's program is a fresh one. "We try not to repeat what we have been doing, we try to come up with a new way to do it, and do it in a different way," Fiedler said. Audiences expecting distinct 'pop-culture identifiers,' like last year's "Fight Club" sequence of the "Frameworks" show, will probably be pleased as the show evolves. "I think there are a couple areas in the show that we need to further develop that I think are going to get some pretty sustained applause from the audience. It's not going to be the same type of thing as the "Fight Club" part in the 2002 production. (But) I think people are going to talk about this and that and other things about the Cavaliers show," Fiedler said. Assistant corps director/color guard coordinator Bruno Zuccala also noted that the show would be evolving as the season progresses. "We have lot of additions coming. We want to make sure that we do everything close to what we want in the first draft, so there are things that might be quite incomplete at this point, but gradually, with our timeline and what the guys can handle, we will put it in at the appropriate times." Zuccala cited the beginning of the third movement of the show as being a standout segment. "One exciting part of the show is the beginning of the third movement. It's kind of cool how the color guard and percussion and the horn line are all integrated, and they kind of change levels, with different voices coming, interpreted by the guard and the percussion line. I think it's great, I think it's fresh, it gets exciting to watch. It always make you think, but it's also going to make you stand up and cheer at the same time," Zuccala said. Despite the accolades of being two-time defending World Champions, the Cavaliers are treating this season as a fresh start. "We go towards this season with the mindset that it's a new year, new program, and new challenges to meet there," Weber said. Jeff Fiedler, director of the Cavaliers, echoed Weber's sentiments. "Our goal this year is to be a better drum corps, better than last year. I think last year set a standard for the Cavaliers, and that this year's group of guy wants to exceed it. We want to be better than we were last year, and I think we have the ability to do that." Members of the Cavaliers are also improving as the season progresses. The Cavaliers "are getting more confident," said Zuccala. "The guys are able to at least take the tools that they have been given to be able to perform a little bit better. It is still very early in the season, but I think they are getting much more confident with every time they go through the performance," Zuccala said. Likewise, Zuccala said the Cavaliers' staff is pushing the corps members. "I'm really excited about this season, they are going to be great because I think we are constantly trying to challenge the kids, and also trying to challenge the staff, and (we're) just trying to put together a great show. I want to make sure that when we look back on August 10, and we are all in our living rooms, that we can actually say that we had a much better program and we pushed the limit as far as performance and crowd reaction and anything that we can do to push the activity to another level."