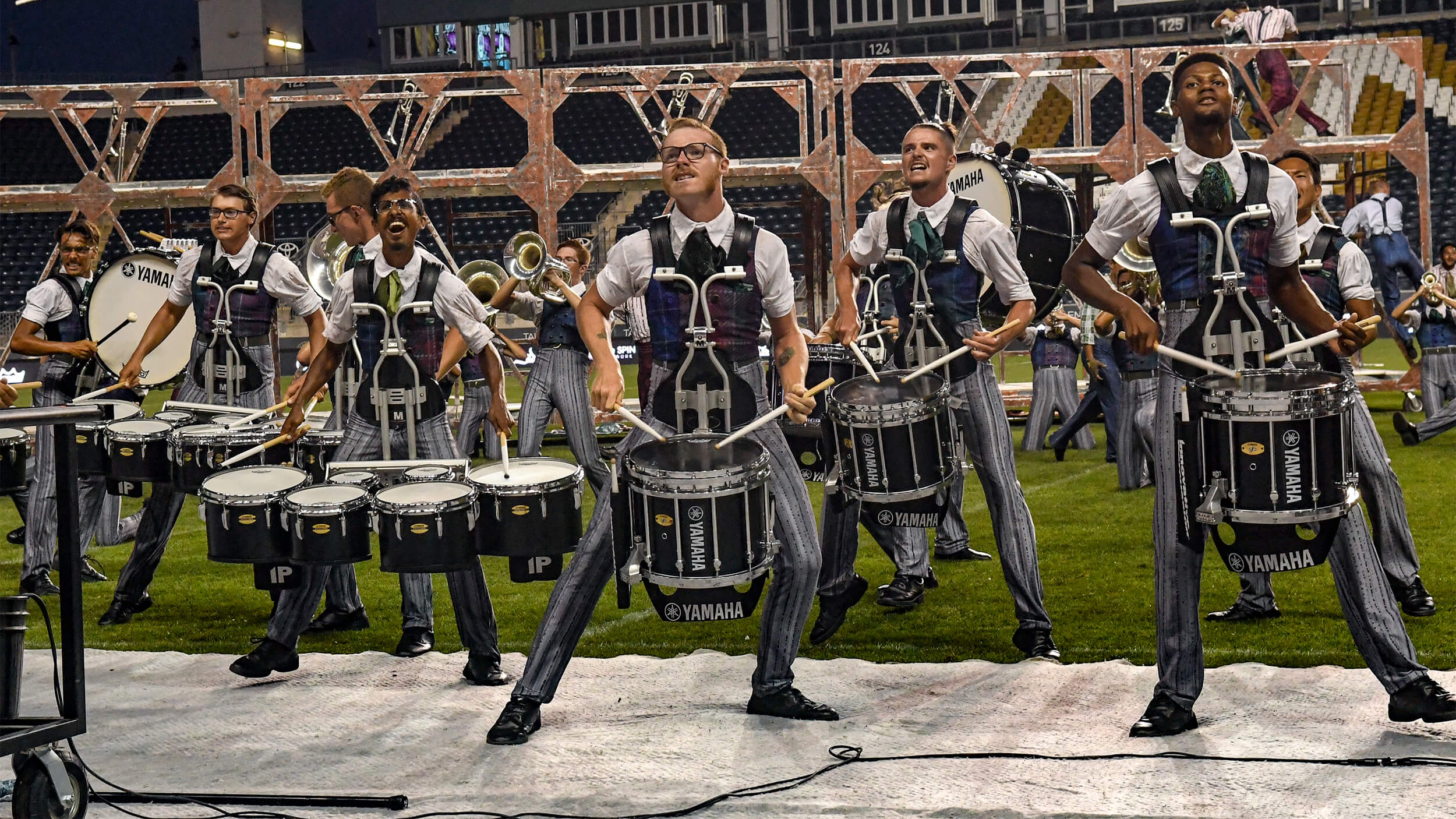 The Cavaliers' percussion section will perform virtually as part of the Percussive Arts Society International Convention this November.Photo by: Drum Corps International

After more than six months apart, The Cavaliers are getting their drum line back together to perform for one of the biggest annual gatherings of percussionists in the world, albeit virtually.

The corps has been selected to be a featured presenter and performer at the 2020 Percussive Arts Society International Convention (PASIC).

Originally scheduled for November in Indianapolis, the Percussive Arts Society announced in July that it will transition the annual gathering which typically features more than a hundred percussion-focused concerts, educational clinics, masterclasses, and much more, into a two-day online conference due to the COVID-19 pandemic.

“Nothing can replace what it’s like to attend PASIC in person,” the organization said in statement posted to PAS.org in July. “However, we’re excited to reinvent that same unique experience you have come to rely on in a virtual setting.”

Aside from a presentation by The Cavaliers’ bass drum section in 2018, this November will be the first time the corps’ entire percussion section has been a part of the convention since 2013. For the members of the Green Machine on the tail end of a summer that saw the cancellation of the 2020 Drum Corps International Tour followed by many high school and college marching music programs also going on hiatus in the fall, it’s a much-needed project during an unprecedented and uncertain time.

“They're so excited to have this opportunity,” Cavaliers executive director Monte Mast said. “It is one of those things that they know what they've missed this summer, and this is a way that they can kind of fill that void. They're beyond excited.”

Spearheaded by percussion caption manager Michael McIntosh, the corps plans to condense 60 years of Cavaliers percussion history into a 60-minute time slot. The session titled, “Zero to Sixty – The Cavaliers Past, Present, Future,” will be part performance, part educational clinic and part history lesson all rolled into one virtual package.

The Cavaliers Drum & Bugle Corps is honored and proud to be featured as a performing artist at the 2020 @PercussiveArts Society International Convention. #cavsPerc #PASIC2020

Since March, members of the current Cavaliers percussion section have been working on excerpts from each decade spanning the 1960s to the present day. For this presentation they’ll be working up some of the most notable percussion arrangements in Cavaliers’ history including selections from 1967, 1975, 1982, 1995, 2002, 2008, and a special premiere of a selection of the corps’ 2021 production.

McIntosh, who will be joined by staff members Bret Kuhn, Alan Miller, Clif Walker, Russell Wharton and Jesse Backes, will use the performances of those selections to speak to and demonstrate design trends in marching percussion over those time periods. They’ll also integrate interview segments from well-known Cavaliers percussion greats, the likes of Mitch Markovich, Dan Spalding, Brian Mason, Bret Kuhn, Jim Campbell, Jim Casella, and Erik Johnson, in an effort to appeal to an audience as diverse as the time period they’ll be representing. McIntosh calls it “a love letter to all those involved in any capacity with the marching arts.”

“When Mike approached me with the idea for this session, I thought this is an ideal clinic. It’s got something in it for everyone who has any interest in the marching arts,” Mast said. “Even as a non-percussionist I’d watch this clinic because there’s going to be things I can learn in addition to being able to revisit performances I maybe only saw on video or saw once in person. It’s such a cool idea.”

While exploring the evolution of marching percussion from before the time of the modern Drum Corps International era, McIntosh noted that it has been a great learning experience for the corps’ drummers who are being introduced to these excerpts for the first time, many of which were originally composed and performed before they were even born. He said that the most dramatic difference between drumming in the 1960s versus what his students are used to today is the slower tempos.

“It’s actually been a real educational point for us,” McIntosh said. “These excerpts are now you would say ‘classic’ or ‘old school’ or ‘retro,’ but these are muscle combinations that they have not really been a part of because of the velocity of today’s drum corps.”

If PASIC was run as a normal convention in 2020, The Cavaliers would have a set of logistical challenges to work through—flying in corps members from locations across the country, transporting equipment, organizing last-minute rehearsals. But now in a virtual setting, putting these performances together has a whole different set of challenges to consider, mostly related to technology. McIntosh says that the corps has already collected upward of 500 videos from the corps members that will need to be reviewed and compiled for the presentation.

“It’s a ton of videos and we’ve asked each performer for multiple takes,” he said. “So it's going to all be pre-recorded and stitched together, down to the minute.”

To do this, the organization has enlisted the help of some of the corps’ talented alumni to assist with the production of the final 60-minute session, both with assembling and editing the video as well as mixing the audio.

“This is falling along the lines of taking a whole village to pull this off with the Cavalier family, and it’s running parallel to a lot of the lessons we work to instill in the membership, what they learn in the corps, and how they go on to pay it forward later in life,” McIntosh said.

Specific to the PASIC presentation, the corps is also engaging its alumni base to perform, asking them to send in their own videos for the final segment which will be an excerpt from the corps’ 1961 season, a historical milestone that saw The Cavaliers go undefeated on the way to winning the VFW national championship title.

Coming at a time when marching music has been on a long break surrounded by uncertainty due to the pandemic, McIntosh said that interest in the project from the corps’ past percussionists across many generations has been particularly high.

“I think everyone's finding that we all kind of need this right now,” he said. “And you know, it's been really cool seeing these submissions. These alumni are turning in videos where some of them are performing in full uniform head to toe. It reminds you how much this corps has meant to so many people.”

McIntosh said the same sentiment rings true for the current generation of performers as they anticipate their return to the spotlight.

"Speaking to the corps members, I’ve told them that their version of these iconic excerpts might be the last drum corps we hear for quite a while, or it could be the last thing we hear for a couple months. We just don’t know right now,” McIntosh added. “So let’s treat this opportunity with the reverence and respect it deserves.”

The Cavaliers’ performance at PASIC on Saturday, November 14, will be available to registered attendees of the two-day virtual convention.