Between 2,200 and 2,400 drum corps fans and supporters came to the Glass Bowl in Toledo, Ohio, on a beautiful evening this past Saturday, many on hand to cheer on hometown favorites the Glassmen, who came in third (65.00) behind the Cavaliers (72.95) and the Phantom Regiment (68.75). "The field is awesome and the weather is gorgeous, I think we cannot ask for a better night for drum corps!" said Kevin Devany of Glen Carbon, Ill., a Cavaliers' fourth-year baritone player. 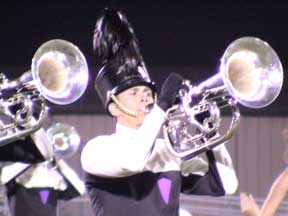 Glassmen's horn line performs in Toledo on Saturday.
Corps officials were also pleased with the conditions of the Glass Bowl. "It's just a great atmosphere to play, the Glass Bowl is a beautiful stadium and the warmup site is just a beautiful area with the trees and shade," said Andrew Houston, brass caption head for the Marion Glory Cadets (36.65). Andy Ebent, 21, from Milford Mich., a fourth-year member and drum major for the Glassmen, said, "We had a lot of fun tonight. The show was a lot more together, a lot more calm. It's getting a lot better, even if there is going to be some changes. There are some things that we need to improve a little bit. We try to use the different elements of the corps to bring out the elements such as air, earth, fire and water. It's different for us, we are trying some news things, but we try to also keep a traditional Glassmen style in this year's production. I'm very excited about what is coming up this season," Ebent said. Devany, the Cavaliers' baritone player, was pleased with the corps' show. "I feel pretty good about our performance. The show went well, there is still a lot of room to grow, but I'm very confident and excited at this point," Devany said. Phantom Regiment (68.75), in their first performance of the season, showed off a new style, new uniforms and a very strong performance in Toledo. Phantom's conductor David Simon, 20, from Austin, Texas, said, "We were really excited. We are coming up this season pretty strong, we knew that we had something going, and the last couple weeks we just had a lot of energy in rehearsals, had a couple exhibitions, and we have been doing pretty well. We were really excited about tonight's performance, we came out with a lot of energy, did what we had to do and I think everyone enjoyed it," Simon said. The first corps to enter the field was Dimensions (33.30) who performed their program "Jubilation Suite" for the very first time of the season. Dimensions were followed by the Marion Glory Cadets, who "did a great show," according to brass caption head Andrew Houston. "Tonight was our first show, we have been on tour for only one day now, we started our hell week last Friday and we have been working hard since then, trying to deal with the rain and trying to get the show on," Houston said. The next corps to perform, Capital Regiment (53.95), presented their program for the first time as well. Randy Isoda, Capital Regiment program coordinator, described their show as "a brave new world, a fusion of old world and new world music." Isoda also applauded Capital Regiment's performance. "Tonight the performers were wonderful, they were very energized, and we are very pleased with the start of our season," Isoda said. Southwind (53.40) also came out with a very good performance on Saturday at the Glass Bowl, according to Chad Truih, a Southwind staff member. "They performed very well, I'm really pleased with how they did tonight. There will be some changes coming, not many, but I'm really looking forward this season," Truih said.