The Cavaliers pulled off a surprise win in Texas tonight as they topped the previously undefeated Blue Devils by just more than half a point at the DCI San Antonio Southwestern Championship at the Alamodome. The Cavaliers took the gold medal with a score of 92.550. 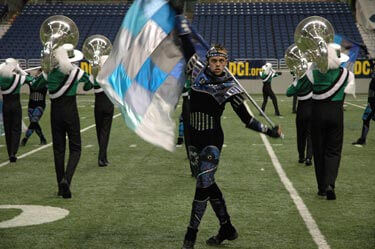 The Blue Devils' "Godfather: Part Blue" was close behind the Cavaliers' "MACHINE" with a 92.000. Phantom Regiment continued their third-place roll with a 90.150, while Bluecoats stayed in fourth with an 89.050 to the Cadets' fifth-place 88.300. The race for the middle of the top 12 was much closer; only a point separated sixth-place Santa Clara Vanguard, 85.225, from seventh-place Carolina Crown at 85.000 and eighth-place Boston Crusaders with a 84.275.

Corps will be moving further East this week as all Division I corps will meet up on Saturday, July 29, at the Georgia Dome in Atlanta, Ga., for the Coltrin & Associates DCI Southeastern Championship.