A few weeks ago, the DCI office staff and a number of family and friends gathered to treat DCI executive director Dan Acheson to a surprise party in honor of his ten years at the helm of Drum Corps International. Check out a video of the gathering. Wow, how 10 years goes by fast. It seems like yesterday that there was serious discussion about DCI entering insolvency due to massive financial problems. The average fan might be shocked to learn just HOW massive the problems were in those days. Indeed, it almost seems like a bad dream now. Things did indeed look bleak. Like someone who would have volunteered to rearrange the deck chairs of the Titanic, Dan, then the DCI chairman of the board, accepted the challenge to try to put a beyond bankrupt DCI back on track. 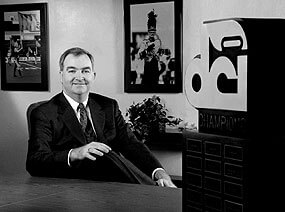