From a Colts press release: The Colts is pleased to announce that Michael Cesario has joined the corps' creative team as program consultant. "Cesario is providing his insight, guidance, resources, inspiration and expertise to us in the development of our show and will help us fully develop our concepts," said Greg Orwoll, Colts executive director. "We are thrilled to have him working with us. What he has contributed already to our 2007 program has been significant." 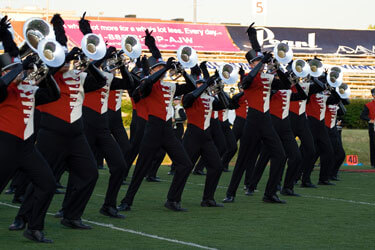 The 2006 Colts perform in Normal, Ill.
Cesario has a long history of success in the drum corps activity and is a member of the DCI Hall of Fame. Most recently, he was the program coordinator for the Madison Scouts. "He has been a friend, mentor and supporter of me personally and the Colts for many years, and having him formally associated with us as our program consultant is an exciting step forward," said Orwoll. www.colts.org