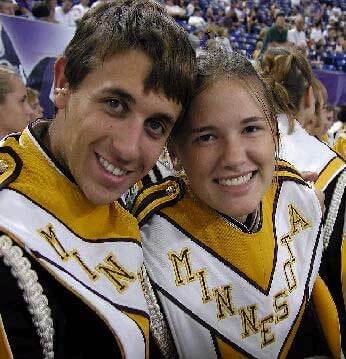 Carl Zepecki, who marched baritone with the Madison Scouts this past summer, sent in this one. "I am a member of the University of Minnesota Marching Band. This is a picture of my friend Megan and I. Megan was my first good friend in the band. During the last part of our marching season last year, Megan became suddenly ill. She underwent open-heart surgery within minutes of being admitted to a Minneapolis hospital. "Megan missed out on our Bowl Game appearance at the Music City Bowl in Nashville, Tenn. Even though she was not able to attend the bowl game, she was with us in spirit. "Returning to Minneapolis victorious, we as a band were thrilled to know Megan, overcoming tremendous odds, was doing remarkably better. She made such strides over the summer that SHE RETURNED TO MARCH THIS FALL! "Megan has taught me so much, even if she doesn't know it. I have learned from her that no matter what obstacles are in front of you, you can work to achieve anything. Never settle for anything else but everything you've got to give. If you have a dream, vision, or goal, if you truly want it, there is nothing stopping you to achieve it. You never know when your last day marching will be. Don't take it for granted. "Whenever I am on a practice field, parking lot, or in front of 20,000 fans, I give everything I have. I leave nothing behind. I am so happy that I met my friend Megan, I have learned a "life lesson," and will thank her forever! Go Gophers!" Thanks Carl! If you marched in a DCI corps in 2003 and now you're in a college or a high school marching band, we want to hear from you! Send us a picture (content@dci.org) of you and your buds, along with some other anecdotal information about your marching experiences, and we'll post it on DCI.org!