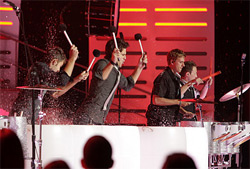 The Cadence from NBC.com.
2006 Colts member Jason Polsgrove and his percussion group "The Cadence," has been competing this summer as part of the NBC primetime show "America's Got Talent." Hosted by talk-show icon Jerry Springer, the program from the same producers of "American Idol," is a variety-type talent search featuring an eclectic mix of musicians, dancers, entertainers and other performers. Acts are judged and mentored each week by celebs David Hasselhoff, Piers Morgan and Sharon Osbourne, while fans have the opportunity to vote by phone for their favorites to determine the advancing groups. With a performance that looked like a cross between a drum corps drum line and a rock band influenced by theatrical shows like "Stomp" and the "Blue Man Group," The Cadence made it past the Semifinal round of "America's Got Talent" making them one of 20 top groups that will perform again this week. The six-man ensemble is working toward the show's ultimate prize of $1 million and a shot at headlining their act in Las Vegas.
The Cadence's Semifinal performance.
"Jason was a superb performer for us in 2006 in our cymbal line, and it doesn't surprise me that he has continued to find success," said Colts executive director Greg Orwoll. "We wish him and the group the best and hope that the entire drum corps community will be supporting them during their next appearance." The next episodes of "America's Got Talent" can be seen on NBC this Tuesday, Wednesday and Thursday at 8 p.m. Eastern. Learn more about The Cadence and "America's Got Talent" at NBC.com.