From a Colts press release: "The Boy Scout motto is 'Be Prepared'," said Bill Symoniak, an actively involved volunteer and parent for the Colts. 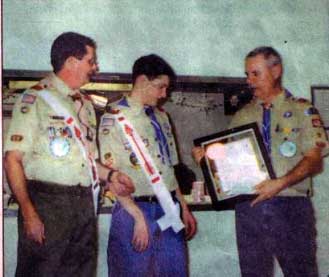 Pat Durham and his father, Steve Durham, expressed their gratitude for Scoutmaster Bill Symoniak's life-saving action in the summer of 2003. Photo courtesy of Anne LeRoy.
Symoniak is also a Scoutmaster, and recently saved the life of one of his Scout members during a trip in Black Hills, S.D. Because of this act, the top Scouting Award was presented to him. Bill said, "I truly appreciate all the extra effort by the leaders in the Troop to make this court of honor and the presentation very special to me and my family. The presentation of the National Award of Merit was a surprise. I knew that the application had been submitted to the national headquarters, but I had no idea if it had been accepted or rejected. It was extra meaningful receiving the award from Pat." The Colts are proud that Bill is actively involved as a volunteer and parent for the Colts organization. We would like to recognize Bill for his outstanding heroic act and say thanks for all he does to impact the youth. Bill Symoniak currently serves on the Colts' board of directors. Read an article in the Coon Rapids Herald about Symoniak.