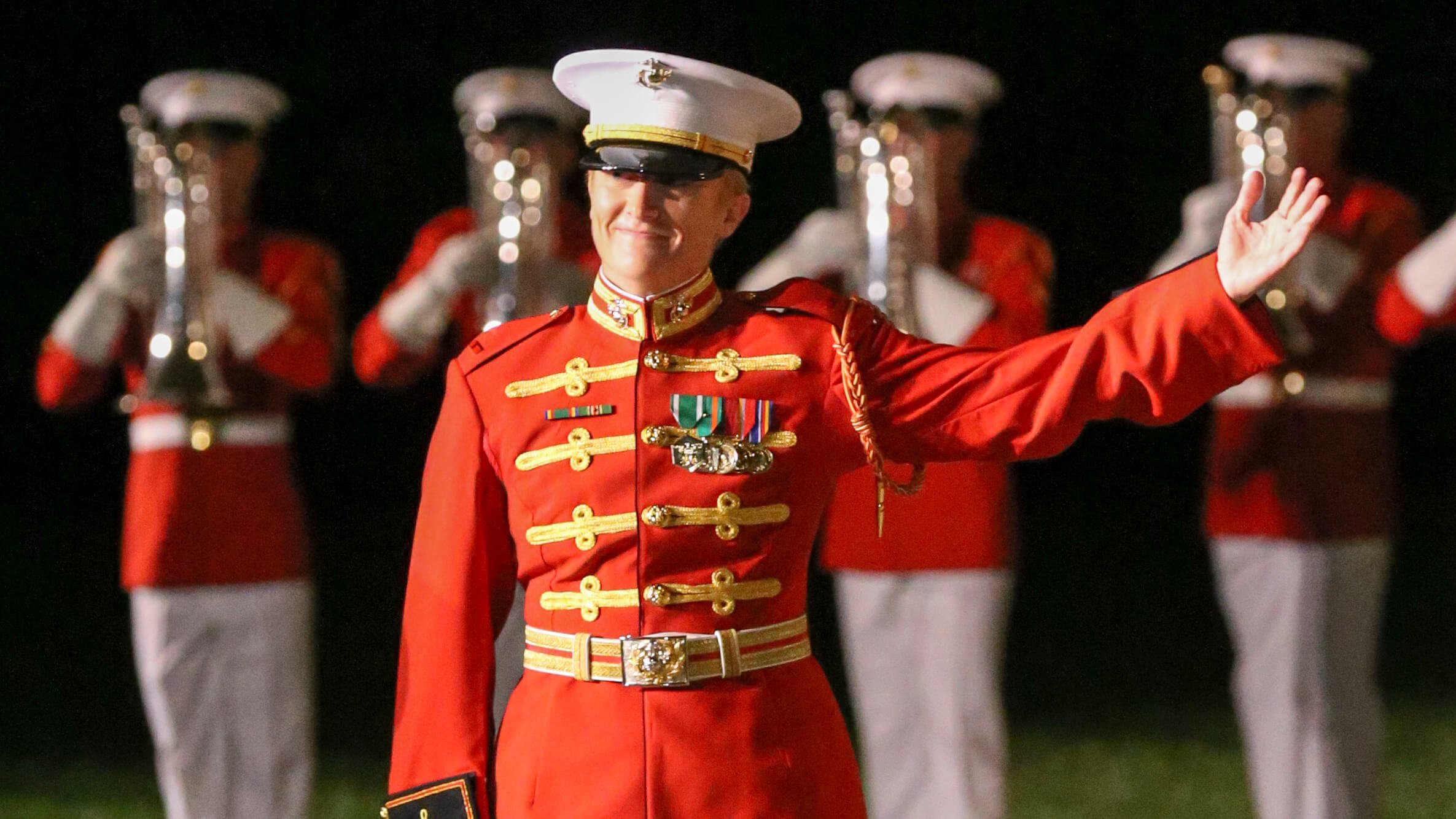 On a hot, summer afternoon, DCI Hall of Fame member Paul Rennick — who, at the time, was serving as Phantom Regiment’s percussion caption head — pulled the members of the corps together between reps to offer a bit of insight during a lengthy rehearsal block.

This block had been particularly long, and it wasn’t close to reaching its end.

Courtney Lawrence couldn’t specifically recall if it was scheduled to be five hours or six hours in total length, but really, when a block is that long, what’s the difference? 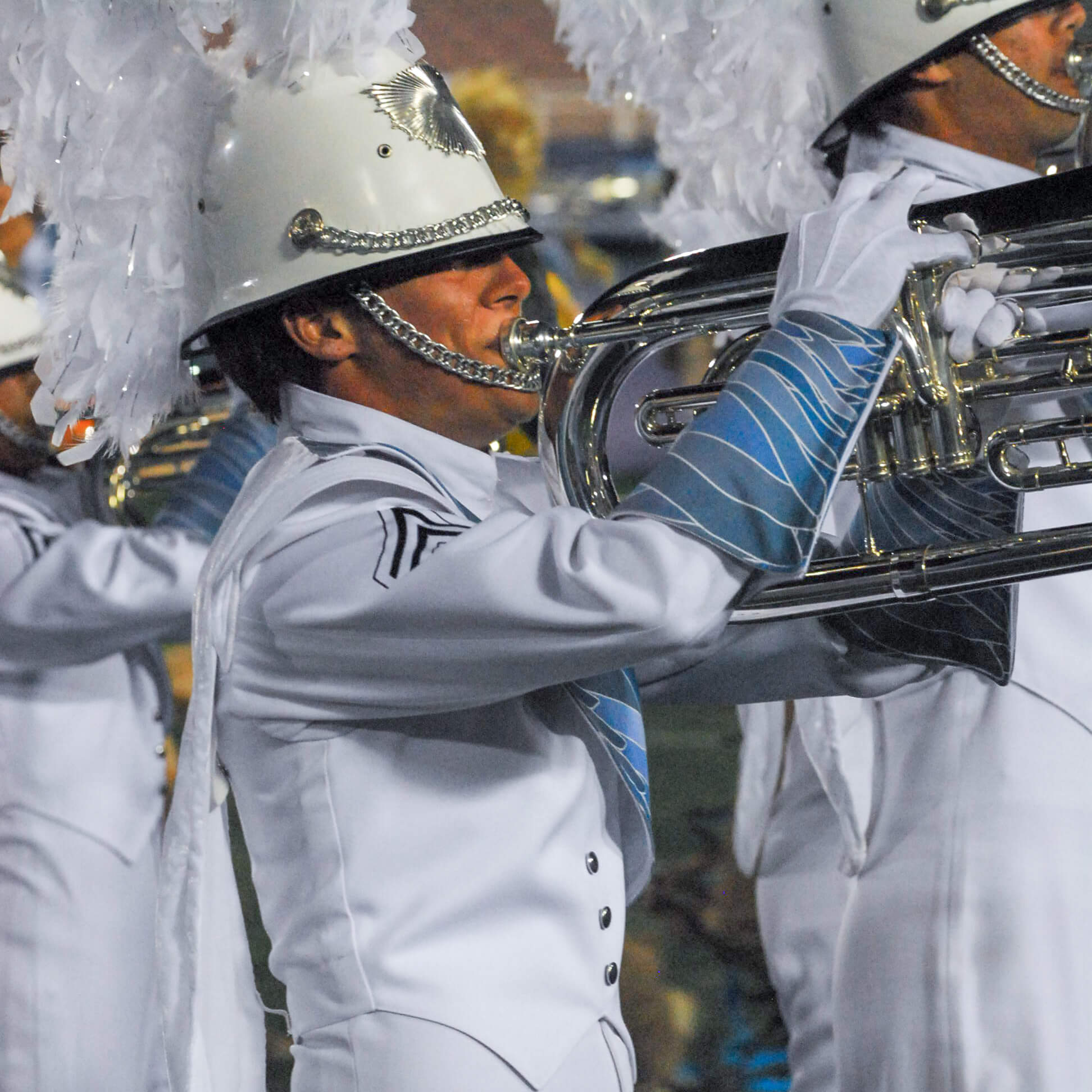 In essence, that’s exactly what Rennick told the corps.

Kind of obvious, in a way, right? Every single second of every hour ticks by at the exact same speed as the one before it. That’s just how life works.

That was the point.

“‘This is going to end,’” Lawrence, then a euphonium player, recalled of Rennick’s monologue. “‘This is eventually going to be over and we’re going to get through this block. So, you might as well just focus, and put your best effort forward now, right?’”

That moment took place more than a decade ago. Lawrence, who “aged out” of the Rockford corps in 2008 after five seasons, plus one with the Colts organization, will never forget it.

She’s been a member of “The Commandant’s Own,” The United States Marine Drum & Bugle Corps, since just after her drum corps career ended. That’s meant multiple double-digit-week stretches of training. That’s meant 11 years worth of rehearsal days.

But time hasn’t stopped. And each second that’s ticked by — accompanied by the same work ethic and drive that was instilled in her over six seasons of drum corps — eventually led Lawrence to become the first female officer in the U.S. Marine Drum & Bugle Corps.

“Getting through boot camp and combat training and The Basic School, there’s moments where you’re just like, ‘Man, drum corps helped set me up for this,’” she said. “‘I’ve already dealt with these feelings before, I know that I can get through it.’”

The drum corps activity itself first entered Lawrence’s life in 2003, and it kind of did so out of nowhere.

Spurred by the recent hiring of a more drum corps-minded director at her high school, the Colts came into town to rehearse and house there during a swing through Lawrence’s home state of Texas.

And they just so happened to have an opening.

Lawrence didn’t even really know what drum corps was, but by the end of that same day, she was on the bus and headed off to the next rehearsal site.

And all it really took was a quick review of her marching technique.

“They’re like, ‘Alright, you’re in, get on the bus,’” she said. “It’s a pretty cool story thinking back on it, that that moment was my introduction.

“It was a huge leap of faith.”

The 2003 season only lasted a few weeks for Lawrence, but that short time frame packed in everything required to leave her fully hooked on the drum corps activity by the time she got home. She’d witnessed life on the road, the feeling of performing for a massive audience, the excellence of a World Class drum corps, and all of the little memories in between. 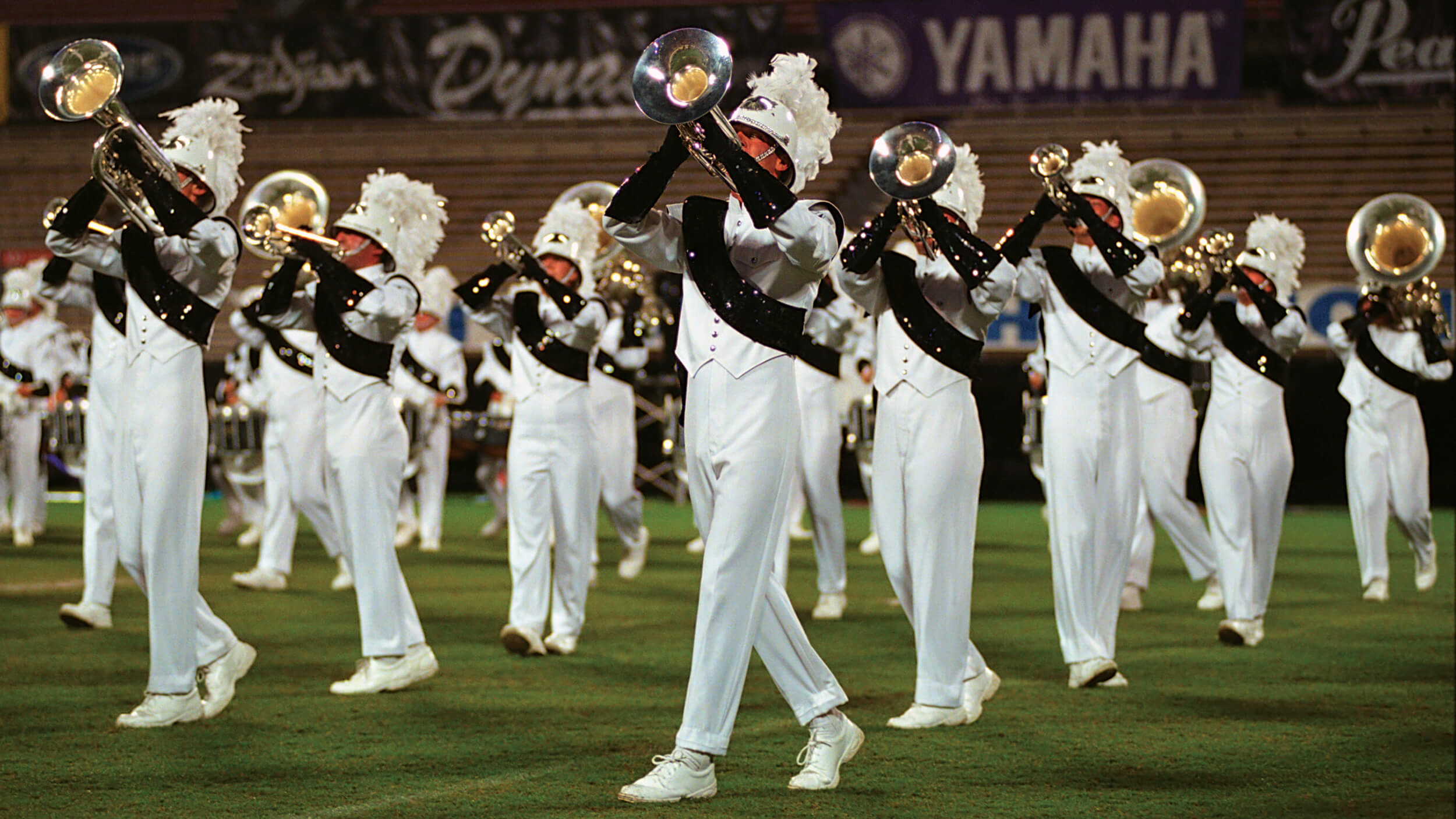 Performances by the 2003 Phantom Regiment inspired Lawrence to join the Rockford, Illinois corps in 2004.

But furthermore, that abbreviated season led her to fall in love with that year’s fourth-place finisher, Phantom Regiment.

“I had a moment when I saw Phantom Regiment, and they’re out there playing ‘Canon’ on the football field and their low brass was like something I’d never heard before,” she said. “That was a moment for me, where I thought, ‘That’s where I’m going; I’m going to that drum corps.’”

So, she did. The 2004 DCI Tour marked Lawrence’s first of five with the Regiment; in each of those five seasons, the corps earned a top-five standing, including a silver medal in 2006 and its most recent gold medal in 2008.

“We had a good ride,” she said. “The people who I marched with were all really proud of being there at a time that was definitely an upward trajectory for the corps. Any drum corps buff is going to recognize that those were some pretty solid shows. So, yeah, really great experiences there.”

Serving in the armed forces was always the plan for Lawrence.

Well, almost always. Up until she was midway through her high school career, “Marine” was the endgame. 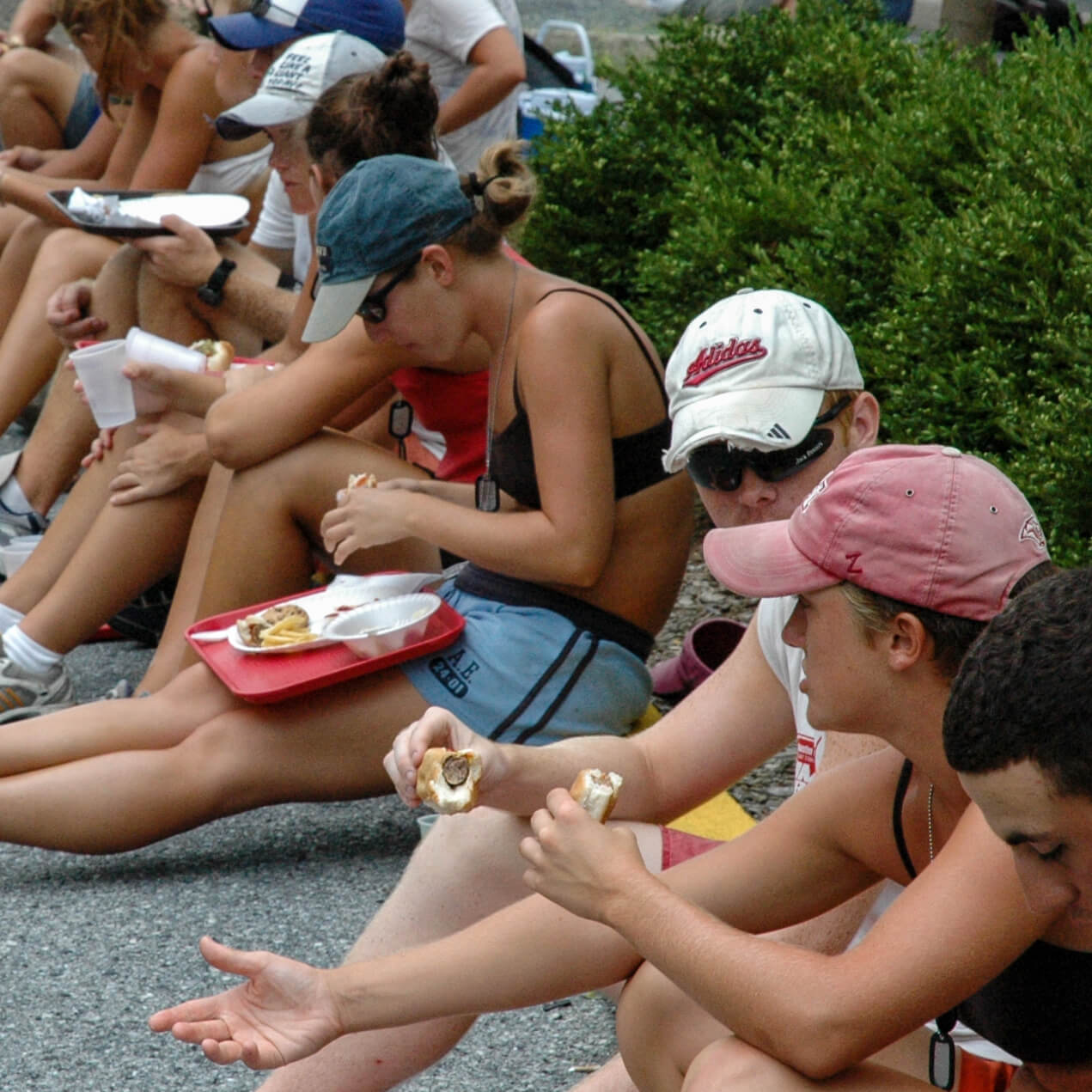 On tour with Phantom Regiment, 2006

“Before I knew about drum corps, I wanted to be a Marine,” she said. “I didn’t really have a lot of military around me growing up, something just kind of sparked in me maybe in middle school.”

That’s where she found herself toward the back half of her years in drum corps, in full pursuit of a career in the arts.

During her 2007 summer tour, however, a Marine recruiter met her right in her tracks.

Now, Lawrence admitted that, leading up to that summer, the thought of joining the Marine Corps had made its way back onto her radar.

But she wasn’t yet thinking about the musical side of service; she wanted to be a Marine Officer, and joining the Marine Corps to be an officer in the music field, simply and colloquially put, isn’t a thing. Officers of Marine Musicians are all promoted directly from within the enlisted ranks.

Nonetheless, the recruiter on hand was quite frank with her — deadpan, almost.

“I told him, ‘I want to go in and be an officer,’” Lawrence said. “And he’s like, ‘Yeah, but you’re in the Phantom Regiment, you’re going to enlist and you’re going to join the Commandant’s Own,’ just matter of fact.”

Obviously, his prognostication would be proven accurate, but that wasn’t clear at the time. It didn’t take too long to come into focus, though; the decision was pretty much made by the time the 2007 drum corps season reached its conclusion.

And from there, it was full speed ahead. Lawrence auditioned, enlisted, won a DCI World Championship, aged out, and reported for boot camp.

The rest is history.

“It’s a common story for a lot of the guys in my unit where we want to do both,” she said. “We have a strong desire to serve our country and we really love music.”

Life in the Corps 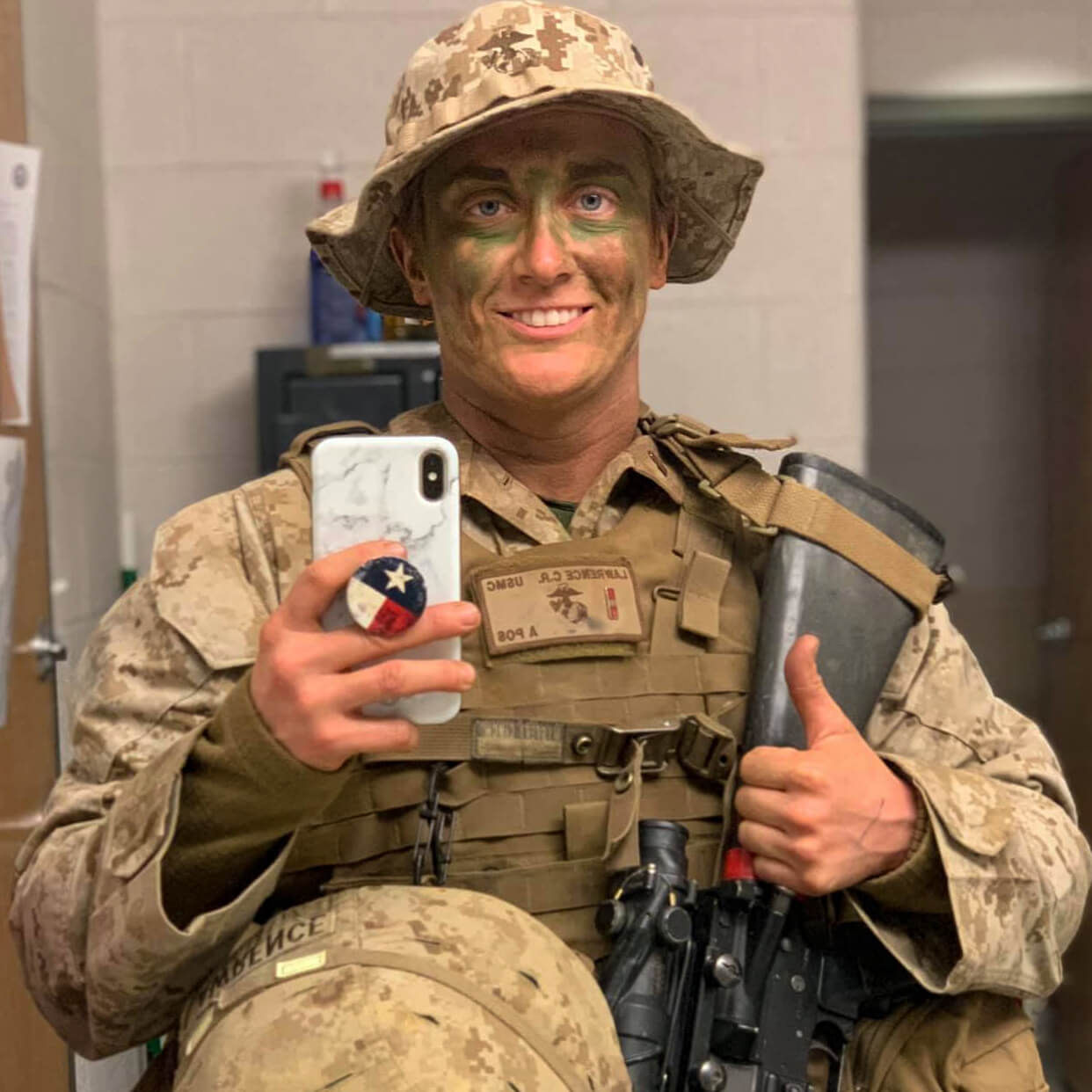 Geared up for a training excercise

In some ways, Lawrence’s 11 years of drum corps with “The Commandant’s Own” have been a lot of the same. In other ways, there’s been plenty of change.

Both of those things are positives. Lawrence loves what she does — think about it, it’s right in the crosshairs of the two things she always saw herself doing — and has been able to experience and aid the forward-thinking growth of one of the United States’ most time-honored marching music ensembles.

Since founded in 1934, there’s been remarkable evolution taking place within the U.S. Marine Drum & Bugle Corps, particularly in the last decade since Lawrence came on board. Granted, it’s all still plenty traditional, especially in comparison to the kinds of things that happen in a given DCI corps’ production, but tenants of modern drum corps are evident, and the group’s performance quality, Lawrence attested, has followed a similar upward trajectory.

“If you look at a video even from my first year, 2009, compared to now, 2019,” she said, “It’s undeniable what the difference is that we’ve been able to accomplish.”

Specifically for Lawrence, though, personal growth has been equally evident as she’s taken on a number of “billets” in the unit that have included euphonium section leader, librarian, drill master, and horn line instructor.

When the corps’ Commanding Officer retired in 2018, she was one of a small handful of applicants to reach the interview and audition stage of the process that would eventually fill the position of Operations Officer, one of just three officer positions within the drum corps.

Out of that pool, Lawrence was ultimately selected to be the 11th officer in the history of “The Commandant’s Own,” also becomming the first woman in the corps' history to do so. She quickly reported to The Basic School — a school all Marine officers must complete — in Virginia, and then assumed her new role.

In her current position, Lawrence oversees the operational and logistical side of the corps. One side effect, though — she hasn’t played a note on her horn since. She doesn’t entirely miss it, though.

“Personally I was ready to do something different, to have a different challenge,” she said. “Getting to be an officer and influence at a different level is definitely something that I was looking forward to.” 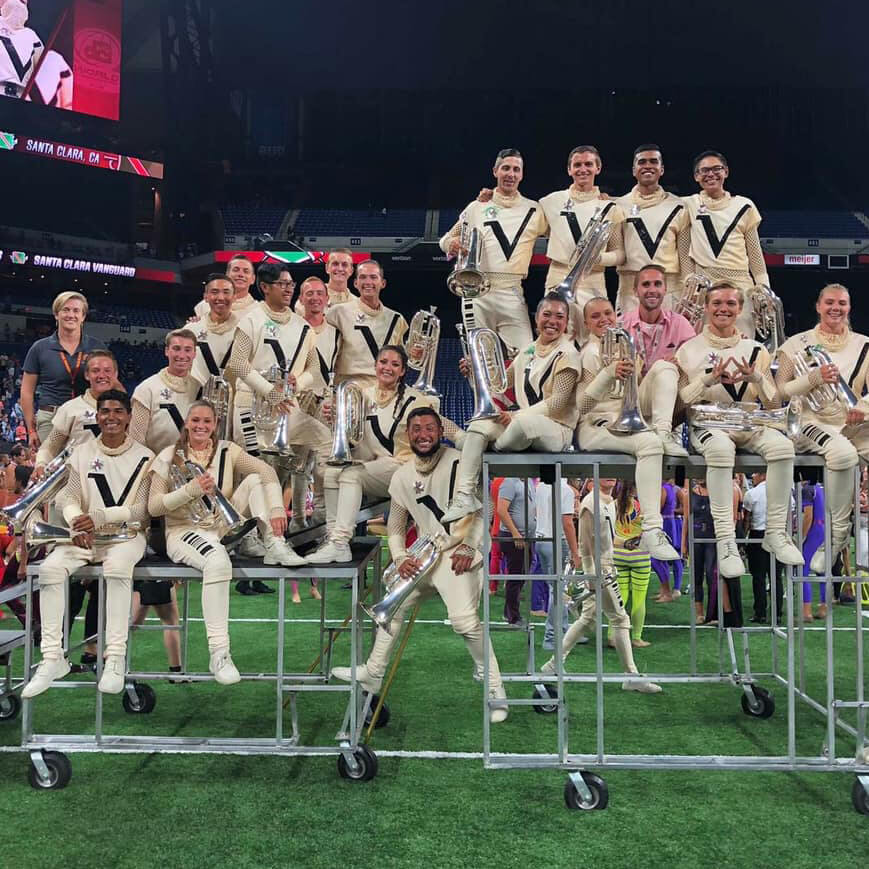 And her influence has already been felt across the corps.

“Courtney has managed to positively influence leadership in ways that were meaningful toward the outward perception of the drum corps and the inward sense of pride that naturally accompanies performance excellence,” said William Rulapaugh, a fellow DCI alum who serves as a Master Gunnery Sergeant with “The Commandant’s Own.” “She has now become one of the true caretakers of the Marine Drum Corps, and she takes that responsibility very seriously.”

Wherever Lawrence’s life has taken her, to this point, music and service have been at the center.

She’s still involved with DCI drum corps, too. While Lawrence doesn’t have a ton of time on her hands, when able, she’s assisted in spurts as an instructor with Phantom Regiment and Santa Clara Vanguard.

The relationship between what she brings to those corps and what they bring to her is perfectly symbiotic.

“There are so many things that I’ve learned the past few years, watching the different teaching styles,” she said. “I’m trying to bring those things back to the Marine Corps to help us grow.”

But all the while, Lawrence is seeing students experience exactly what she did. The drum corps activity has changed plenty since 2008, but the DNA is still the same.

Seconds keep ticking by, rehearsal repetitions pile on top of one another, and unflappable work ethics are forged.

And maybe, just maybe, future Marines like Lawrence are being forged, too.

“I know so many kids who are interested, not just in coming here but just the military in general,” she said. “It’s just fun to maintain those relationships.”