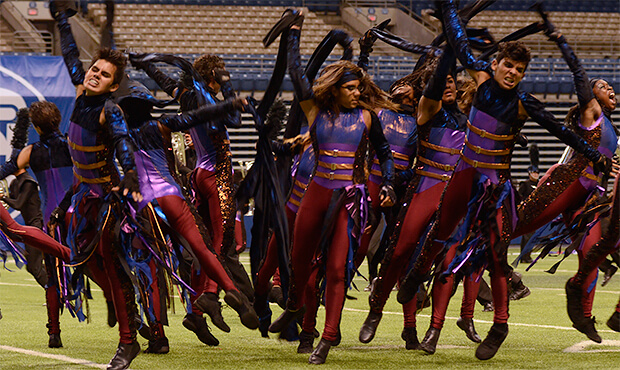 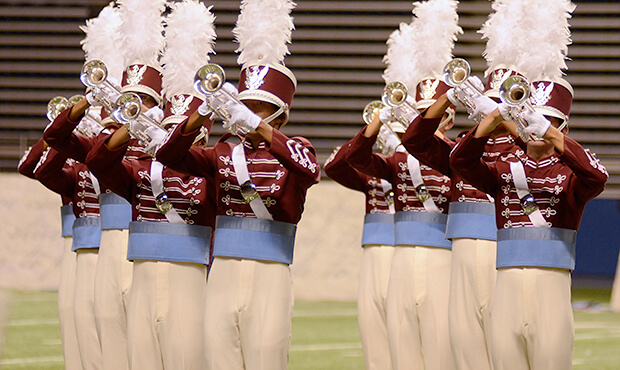 The Cadets eclipsed 90 points with their performance on July 19 at the Alamodome in San Antonio.
Early Arrival to 90: Two corps passed 90 points this past week including the Blue Devils (91.300) on July 18 in Houston and the Cadets (90.975) on July 19 in San Antonio. Bluecoats were just 0.15 points from passing 90 in San Antonio, and had they done so, it would have been 12 days earlier than the Ohio corps passed 90 last summer. The Cadets and Carolina Crown were the first to break 90 in 2013, doing so on July 22. Higher and Higher: The top 12 corps at the DCI Southwestern Championship on July 19 in San Antonio all surpassed 80 points, up from 10 corps at the same show the year before. The top 13 placements all had higher scores than the equal placements at last year's event. Slowing Down the Concord Express: Blue Devils continued their undefeated streak through the end of last week. They have yet to lose in 17 straight events. The closest competition dialing in their sights on the Devils after last week looks to be the Cadets who came within 0.675 points of the California corps in San Antonio. While the third-place Bluecoats were 1.8 points behind the Devils in San Antonio, that marked a solid improvement over just five days earlier when the corps was as many as 3.5 points behind. Better But Not Record Breaking: The Blue Devils' 91.650 in San Antonio on Saturday was more than two points ahead of the corps' winning score last summer at the Alamodome. That 91.650, however, is 0.9 points behind the highest score ever recorded at the San Antonio venue, which was achieved by the Cavaliers (92.550) three weeks before winning the DCI World Championship title in 2006. The Spirit of Competition: After Colts pulled off three wins in a row against Spirit of Atlanta, Spirit snuck ahead of the Iowa corps on July 19 in San Antonio by a little under a half a point. Just five days earlier in Lebanon, Illinois, Colts had been ahead by 1.5 points. 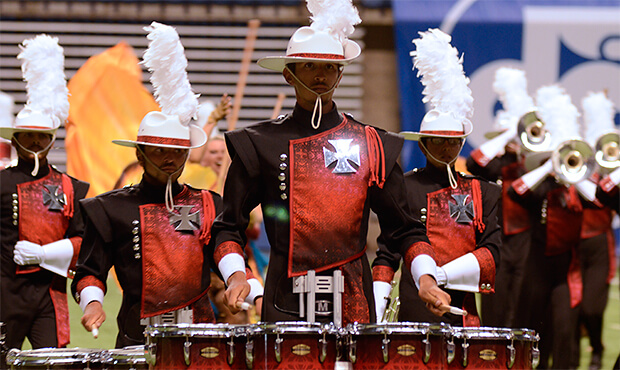 Crossmen nabbed 12th place in front of a hometown crowd at the DCI Southwestern Championship in San Antonio Saturday.
Hometown Heroes: Performing for their hometown crowd in San Antonio on Saturday, Crossmen showed that they are working hard to return to the elite "Top 12" at the DCI World Championship Finals this coming August after missing out in 2013. In a lineup that featured all 22 of DCI's World Class corps, Crossmen grabbed 12th place at the Alamodome, more than two points ahead of the 13th-place Troopers and 1.175 points away from the 11th-place Madison Scouts. One Small Step For Scheherazade: Santa Clara Vanguard took home first place overall in percussion on Saturday in San Antonio, on the way to a fourth-place finish overall (89.000). That helped the California corps narrowly finish ahead of Carolina Crown (88.700) for the first time since July of 2009. Wisconsin Opposition: After finishing just 0.15 behind on July 6 in Lisle, Illinois, Blue Stars passed up the Madison Scouts for the first time this summer on July 19 in San Antonio. The La Crosse corps outscored the Men of Madison by three tenths of a point, 81.725 to 81.425. Before Saturday, it hasn't been since August of 2010 that the Blue Stars finished ahead of the Scouts. Simulated Top 12: Based on averaging total scores over the last week, the top 12 corps at the World Championship Finals would potentially be (pluses and minuses indicate change from last week): 1. Blue Devils 2. The Cadets 3. Carolina Crown 4. Bluecoats 5. Santa Clara Vanguard 6. The Cavaliers 7. Phantom Regiment 8. Blue Knights 9. Blue Stars (+2) 10. Madison Scouts 11. Boston Crusaders (-2) 12. Crossmen Troopers, Colts and Spirit of Atlanta were the next three highest average scores of the week. Upcoming Events 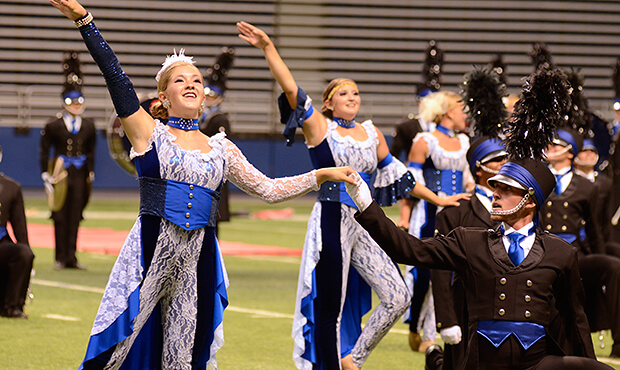