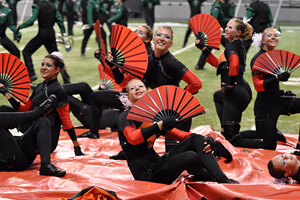 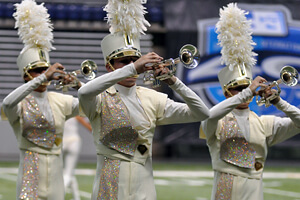 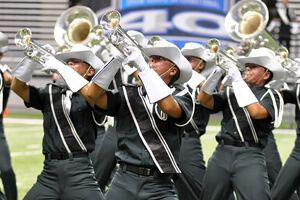 Madison Scouts
• Though achieving the high percussion caption score of the week on July 20 in Houston, Santa Clara Vanguard would lose the caption by a tenth of a point a day later in San Antonio, finishing second behind the Blue Devils for one of the first times this season. • After getting ahead of Madison in Minneapolis on July 17, the Cavaliers fell back behind the Wisconsin corps in San Antonio by 1.55 points. The Cavaliers also continue to go back and forth with Boston Crusaders, with Boston edging the Green Machine by just 0.05 on July 21 in San Antonio. Boston will see the Cavaliers again on July 23 in Odessa, Texas. The Scouts will next face the Cavaliers on July 28 in Atlanta. • Madison Scouts showed the most improvement of any World Class corps between July 17 in Minneapolis and July 21 in San Antonio, increasing their score by 5.3 points. One of the corps' Achilles' heels at this point in the season may be its color guard, who dropped from ninth in Minneapolis to 14th in San Antonio. • Within tenths of last year's World Champion all summer long, Phantom Regiment finally made a move on the Cadets, scoring 0.2 ahead on July 20 in Houston and 0.8 ahead the next day in San Antonio. The two corps will next face each other on July 27 in Murfreesboro, Tenn. 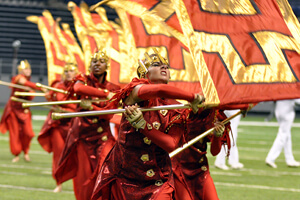 Phantom Regiment
• Though Phantom Regiment's percussion section finished in seventh place on July 21 in San Antonio, no other caption was more than 0.5 away from the first place score at that event. • Despite a five-point penalty for stepping off three and a half minutes late in San Antonio, Oregon Crusaders still surpassed their nearest competition at the event by five points. Rivals Blue Devils B and the Vanguard Cadets will be back in action this week. The three corps have all been scoring closely to one another this summer, and they will face each other on July 28 in Paw Paw, Mich. • In a fight for the 12th spot at the World Championship Finals, Crossmen finished just fourth tenths from the 12th place Blue Stars in San Antonio on July 21. • Based on averaging total scores over the last week, the top 12 corps at the World Championship Finals would potentially be: 1. Blue Devils, 2. Carolina Crown, 3. Phantom Regiment, 4. The Cadets, 5. Santa Clara Vanguard, 6. Bluecoats, 7. Madison Scouts, 8. The Cavaliers, 9. Boston Crusaders, 10. Spirit of Atlanta, 11. Blue Knights, 12. Blue Stars. 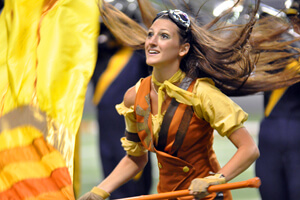 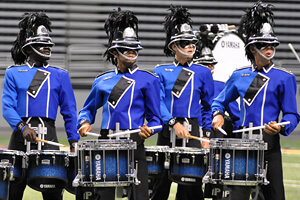