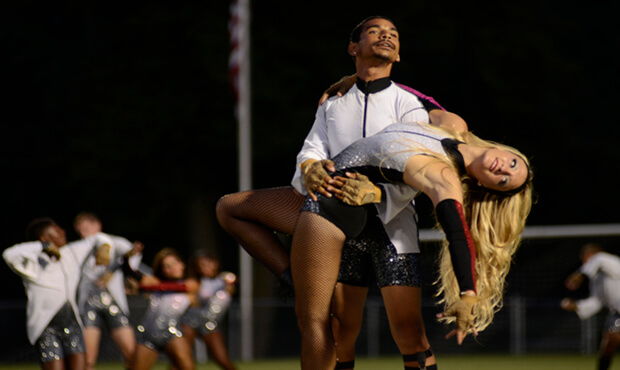 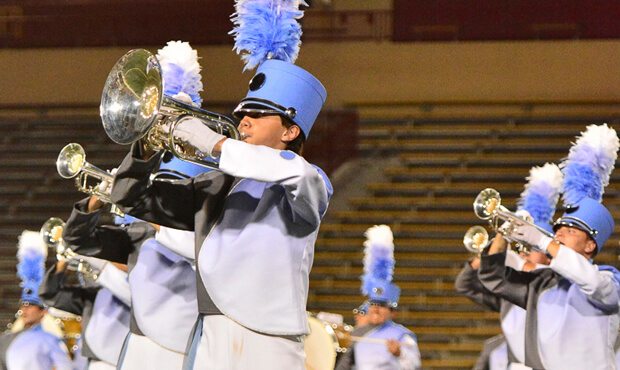 Blue Knights recently joined the '80-Point Club' on July 9 in Ogden, Utah.
Score Climbers: Scores continue to climb as corps polish their 2014 competitive productions. The Blue Devils (7/3, Cedarburg, WI), Bluecoats (7/8, Ft. Wayne, IN), Cadets (7/9, Metamora, IL), Carolina Crown (7/12, La Crosse, WI), and Santa Clara Vanguard (7/12, Denver, CO) have all scored over 85 points. Blue Knights (7/9, Ogden, UT) was the only new corps over the past week to eclipse the 80-point milestone. Undefeated Uncertainty: Both the Cadets and Blue Devils were undefeated coming into the week. On July 9 in Metamora, Illinois, the two corps met each other for the first time in 2014, and the Blue Devils came out more than a point ahead. The Devils won again on July 13 in DeKalb, Illinois, 87.60 to 86.60, pushing the California corps' undefeated streak to 13 events. Devils Knocking On Their Door: After the Vanguard Cadets won the first six head-to-head matchups of the summer, Blue Devils B finally surpassed the 2013 Open Class World Champion on July 12 in Vista, California. Blue Devils B put some more distance between the two corps on July 13 in Cerritos, winning 68.60 to 67.25. Ragin' Cajuns: New Open Class corps Louisiana Stars made its debut performance on July 13 in Muscatine, Iowa. The corps finished just a half a point behind Legends at that event and will compete in three more DCI Tour events this summer. The corps' next stop is July 14 in Lebanon, Illinois. 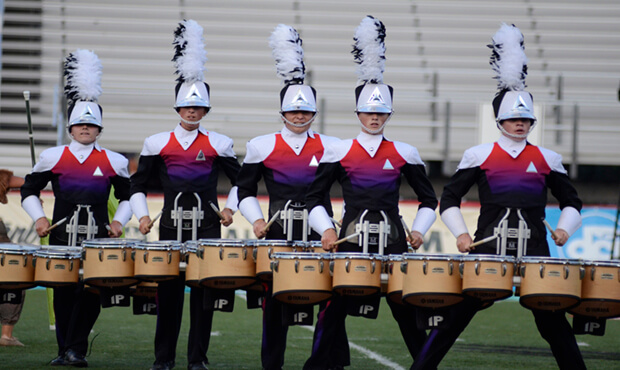 For the first time since the 2010 DCI World Championships, the Colts are placing ahead of Spirit of Atlanta.
Iowa Offensive: Colts passed up Spirit of Atlanta on July 12 in La Crosse, Wisconsin, besting the Georgia corps by a slim margin of five hundredths of a point. Colts widened that lead by nearly a point the following day in Muscatine, Iowa. Before Saturday, it hadn't been since the 2010 DCI World Championships that the Colts had finished ahead of Spirit. Oregon Outscoring: Oregon Crusaders has been making a strong run on the DCI Tour to date. The corps passed 70 points 11 days earlier this summer compared to 2013. The corps outscored Pacific Crest for the first time ever on July 9 in Ogden, Utah, 70.60 to 69.30. Simulated Top 12: Based on averaging total scores over the last week, the top 12 corps at the World Championship Finals would potentially be (pluses and minuses indicate change from last week): 1. Blue Devils 2. The Cadets 3. Carolina Crown (+1) 4. Bluecoats (-1) 5. Santa Clara Vanguard (+1) 6. The Cavaliers (-1) 7. Phantom Regiment (-1) 8. Blue Knights (+1) 9. Boston Crusaders (+2) 10. Madison Scouts (-2) 11. Blue Stars (-1) 12. Crossmen (+2) Troopers, Spirit of Atlanta and the Colts were the next three highest average scores of the week. Stepping Up to the Plate: As the 2014 Drum Corps International Tour marches into its second full week of competition, corps that will be making their first performances of the season include Guardians (July 17, Round Rock, TX) and Coastal Surge (July 24, Johnsonburg, PA). Upcoming Events 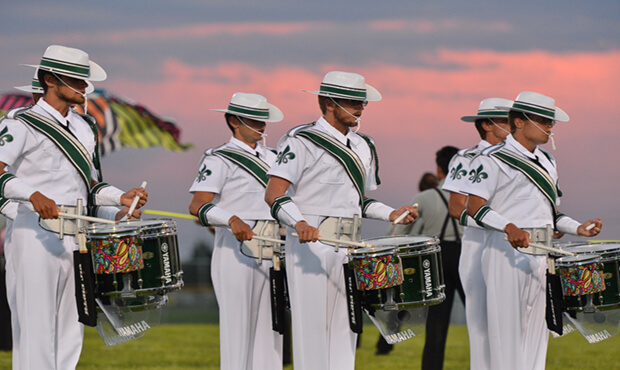