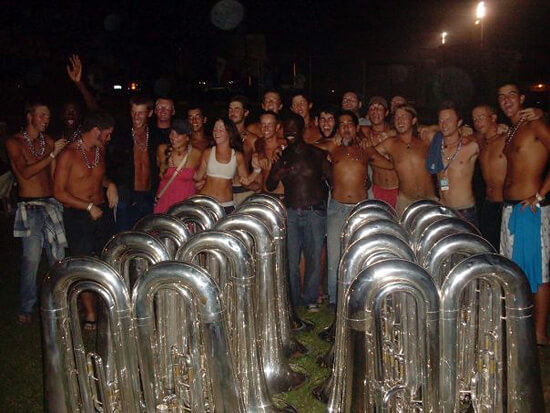 This is a photo of the contra lines from Spirit and Crossmen in Allentown, Pa. The two horn lines honored a long-standing friendship by standing in mirror-image arcs outside J. Birney Crum stadium and playing their respective corps songs ("Georgia" and "Russian Christmas Music") for each other.

The bond was perhaps best described by Aaron Goldberg (Crossmen baritone '98, '00,' 01, brass caption head '08-present): "It is so nice, so refreshing, and such an honor to have a corps that is so heavily competitive in uniform, but when the uniforms come off, we have each other to rest on forever and all time."

Although we never marched in the same corps, the members of Spirit are certainly our drum corps brothers and sisters! Love you guys!