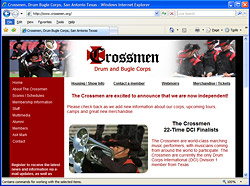 After nearly a year of planning and collaboration, the Crossmen transition to independence from Youth Education in the Arts is taking clear shape, including the construction of a new Web site that will be available soon.

Members, fans and friends of the corps should stay tuned for an new Web address announcement, according to Crossmen Director Mark Chambers. The move comes following DCI World Championships held in Pasadena, Calif. As management teams from YEA! and the Crossmen completed the 2007 drum corps season, logistics of the corps' move to San Antonio, Texas, were also being finalized.

The Crossmen became a program of Youth Education in the Arts in 1996 when the corps was struggling financially and under threat of folding. Founded in 1975 and fondly known as "Bones," the corps has carried its home on the East Coast for decades, including West Chester, Pa., and Newark, Del. For 11-years, the corps was part of the YEA! family, its home town in Allentown, Pa.